AFSPA: Anger simmers in Northeast as the chorus for repeal of AFSPA grows - The Probe

AFSPA: Anger simmers in Northeast as the chorus for repeal of AFSPA grows 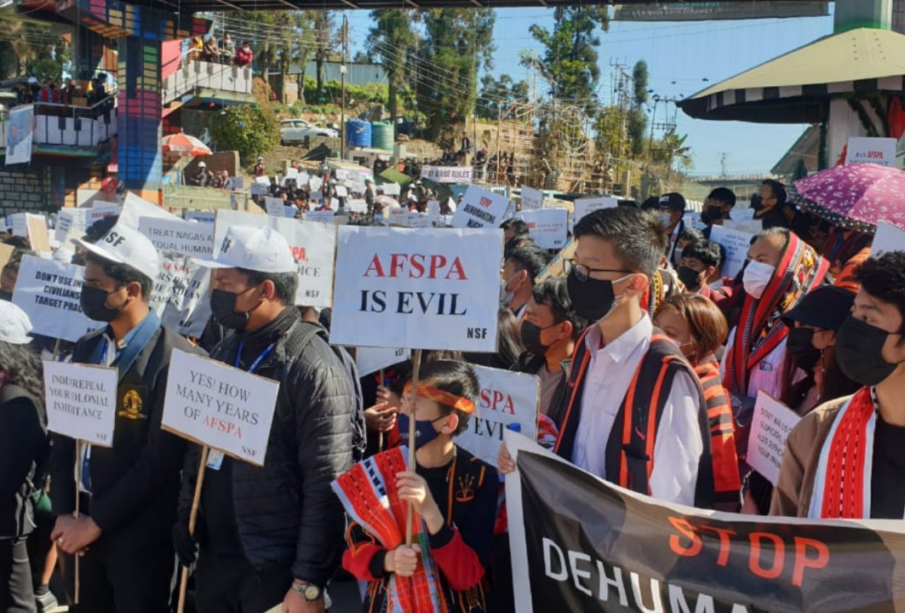 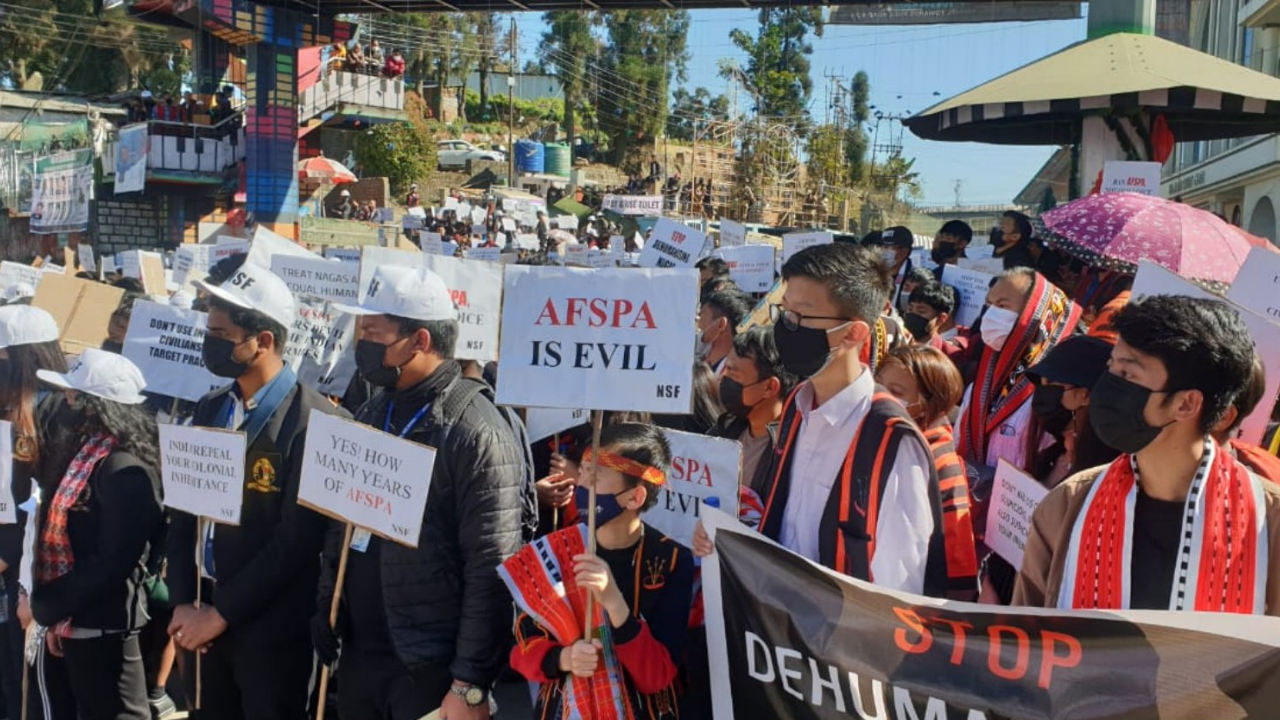 Democracy has no place for a draconian act like the Armed Forces Special Powers Act-1958 (AFSPA), first enacted by the British. Only a military dictatorship would celebrate an act like AFSPA. Then, why is it, despite sustained and peaceful outrage by citizens, especially in the Northeast and Kashmir, and opposition to it among the larger community of intellectuals, students, academics, actors, artists, politicians and ruling state governments in these regions, successive regimes in Delhi – the capital of the largest democracy – refuse to scrap this act?

And despite the suffering of ordinary, innocent Indian citizens, why are the army and paramilitary forces given such unprecedented powers, which they often choose to use, in spontaneous panic or in cold-blooded deliberation, to arrest, torture and kill people?

Rajeev Bhattacharyya, Senior journalist from Assam, says repealing the AFSPA is the need of the hour

MJ Vijayan, Delhi-based human rights and peace activist, says, ‘‘The state governments or regional political parties do not have to deal with one of the biggest lobbies in any ‘nation’ – the defence lobby. In India, as you know, that includes the arms-sellers, retired defence personnels, rather large corporate middlemen, compromised defence journalists, plus an army of military-loving Bhakts of the militarised nation.’’

Says Satya Sivaraman, Associate Editor, Countercurrents: ‘‘The Indian army will not allow it because their soldiers will revolt if they have to work in tough environments against highly motivated insurgents. They would also be liable for punishment in case there is collateral damage. Primarily, the point is that AFSPA covers up for the lack of discipline and training in the Indian army and the poor quality of its troops.’’

“There are at least 7000 separatist rebels campaigning for the sovereignty of the North East. The Indian army is one of the biggest armies in the world. The army is combating 7000 odd separatist insurgents, most of whom are in Myanmar. But having said that, does such a powerful army require an extraordinary and obnoxious power like AFSPA to combat these militants? It is for the government of India to think.”

Earlier it was Manipur. In recent times, almost the entire civil society and its political class, including the Chief Minister of Nagaland, have been up in arms seeking the immediate repeal of the act. Massive protests and long marches, all peaceful but with angst and anger, have been held in towns and rural interiors. After dilly-dallying for days, the Centre has yet again extended the tenure of AFSPA, rubbing more salt into the wounds of the people who are still in mourning.

Indeed, it often seems that the Northeast is so far away from the mental horizons of the corridors of power in Delhi that neither the central government nor the mainline media show any concern. This is a post-independence phenomenon, and despite the violent insurgency which has now been replaced by endless and unfruitful peace negotiations at the highest level with the underground leaders, nothing has changed on the ground. The tragedy, the despair, and the bottled-up anger continue to simmer.

The current impasse started on December 4, last year, when 13 miners were killed by the paramilitary forces in the Oting-Tiru area. A day later, on Mon, unable to tackle violent protests by locals, the army fired indiscriminately, and a soldier too was killed. Innocent blood continued to flow while mothers cried saline tears.

The six coal miners singing songs on a pick-up truck were happily returning home for the weekend respite from the coal mines, all ready to join the local community for the Sunday church prayers. Instead, the community mourned as their coffins were laid out for the final burial – death for no rhyme or reason.

Instead of reaching out to the families, the army reportedly tried to camouflage the incident. Video images allegedly showed that it was trying to move the bodies, wrapped in plastic, in another tarpaulin-covered vehicle. If the army, indeed, fired in self-defence, fearing that the miners on the pick-up truck were armed terrorists, why indulge in this act of camouflage?

Soon after, more fudging followed. In a statement in the Rajya Sabha, Union Home Minister Amit Shah claimed the vehicle ‘‘was signalled to stop’’ and was fired upon after it ‘‘tried to flee’’.

“The government of Nagaland has also passed a resolution in the assembly that AFSPA should be repealed. But the government of India continues to give a deaf ear. So, the boycott of the January 26 Republic Day was a demonstration of our frustration. Perhaps that was one of the last peaceful resorts that we had with us to make our voice heard.”

Even while the army top brass and the Centre tried to do damage control, local reporters reached out to the wounded and lucky survivors. The reporter from The Indian Express (December 6, 2021) reached the Assam Medical College and Hospital in Dibrugarh, where two survivors were taken. Said Sheiwang from Oting village, just about 23, “Direct marise… they shot right at us.”

Among the eight coal miners in Oting village who were shot dead in cold blood, he is one of the two who survived miraculously. Another survivor in the hospital told the reporter, “We were not signalled to stop. They shot at us directly. We were not trying to flee. We were just in the vehicle”.

Except for the former Left-led government of Tripura, with Manik Sarkar at the helm, no other state government has scrapped AFSPA. Now the Nagaland government has sought its repeal, responding to the mass unrest across the state. Nagaland is aware of the bitter reality on the ground because it shares its sorrow with its neighbour, Manipur.

Trapped in the ‘disturbed areas’ syndrome, Manipur has a litany of tragic tales and atrocities unleashed on its people, with extra-judicial killings documented meticulously by human rights groups. A two-judge bench of the apex court had earlier pulled up the CBI for delays in investigating the extra-judicial killings in Manipur and the filing of charges. Justice MB Lokur and Justice UU Lalit summoned the then CBI director Alok Verma and said there was reason for the court’s impatience. A Public Interest Litigation was filed by the Extra Judicial Execution Victim Families Association, Manipur, and Human Rights Alert (HRA), a watchdog based in Imphal. It was alleged that as many as 1,528 extra-judicial killings were enacted between 1980 and 2011.

One of the infamous incidents happened in a beautiful green village called the ‘Malom Massacre’ when ten innocent citizens were killed for no reason by the 17 Assam Rifles on November 2, 2000. This massacre led to the famous satyagraha of Irom Sharmila, which went on for 16 long years. This reporter met her on November 5, 2015, in Imphal, the 15th year of her fast against AFSPA. The walls of her little room in the hospital, in custody, was full of solidarity messages, including a precious letter by Nelson Mandela. Among other books was one by Gabriel Garcia Marquez.

A nasal drip on her face, resilient and stoic as ever, she spoke softly: “How can nations call themselves advanced or civilised if they practice, sanction and legitimise organised barbarism in the name of law and order? Why can’t they repeal AFSPA if they know so well that it is completely inhuman, anti-democratic, brutal, and irrational; that, it has led to mass insecurity, relentless tragedies, angst and injustice in Manipur and Kashmir; that it has led to the armed forces going berserk without accountability and with absolute impunity? I am fighting for reason and humanity. My struggle is peaceful. Why should the armed forces be allowed to kill, torture and get away? Why are we treated differently from the rest of India?”

The legendary ‘Mothers of Manipur’ have continued the peaceful struggle. But what they did outside the Kangla Fort in Imphal, then the headquarters of the Assam Rifles shook the nation’s conscience.

This was July 14, 2004. Twelve mothers stripped themselves naked outside the fort. The banners they held said: ‘Indian Army Rape Us’; ‘Indian Army Take Our Flesh’. And why did they enact such a strong protest defying all norms and protocols of a protest?

They had stripped themselves naked in protest against the rape and murder of a 32-year-old woman who lived in a poor home in the outskirts of Imphal: Manorama Thangjam. Four days ago, she was forcibly picked up by the armed soldiers of the Assam Rifles – then raped, brutalized and murdered. There were gunshots found on her thighs and private parts.

The army reportedly alleged that she was running away. The whole of Manipur knows that a woman wearing a Sarong just cannot run away, and how could she run when she was so brutally trapped by armed men of the Assam Rifles?

That is the reason why the ‘Mothers of Manipur’ chose to strip themselves nude in bright daylight for the whole world to see outside the Kangla Fort in Imphal. That is why the ‘Mothers of Nagaland’ and that quaint little Christian village are still mourning the untimely death of their sons, most of them young and full of dreams. And that is why the entire civil society and political class in the state are demanding that this draconian act, called AFSPA, should go – lock, stock and barrel.

Will Modi and Amit Shah listen to the passionate appeal of the mothers of Nagaland and Manipur? Will they pause and be sensitive enough to feel their infinite tragedy? Will they listen to the voice of democracy and apply the vision of statesmanship, thereby choosing to repeal this act and set an example for the world to see? By all indications, as of now, there seems little hope.