Black fungus: a disease the poor cannot afford; Mucormycosis cases soar in India, so does the price of key medicine - The Probe

Black fungus: a disease the poor cannot afford; Mucormycosis cases soar in India, so does the price of key medicine

15 to 20 lakh is what an average patient needs to get treated for black fungus; doctors say patients are struggling for money and medicine
by Prema Sridevi
Covid-19India
READ

Black fungus or Mucormycosis, until recently was considered a serious but rare fungal disease. Not anymore. Black fungus cases have been soaring at an alarming rate in India and more than the deadly disease, the response to it from the government seems very disconcerting. 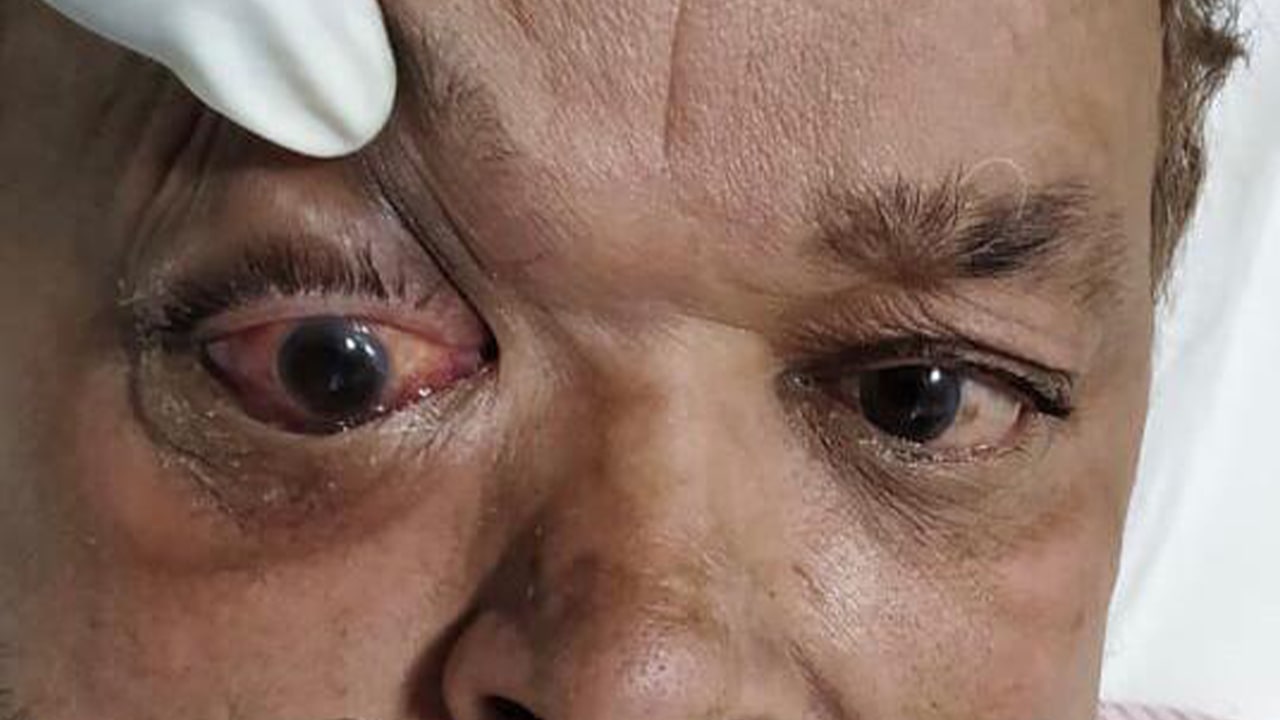 A patient suffering from black fungus | by special arrangement

Patients who suffer from black fungus depend on the life saving drug Amphotericin-B. In most hospitals across the country, this drug has run out of supply. An average patient needs at least 7 vials of this antifungal drug a day for 15 to 30 days depending on the extent of the disease. Each vial costs a whopping 7000 rupees – which means – depending on the severity of the disease, a patient must spend anywhere between 12 to 15 lakh for this drug. This coupled with the hospital admission expenses and the cost of parallel drugs that are administered along with Amphotericin-B, a patient ends up spending 15 to 20 lakh for treatment. The poor who cannot afford this are succumbing to the disease and so far there has been only promises but no on-the-ground intervention from the government’s side.

Sachidanand Satapathy, a retired government scientist was affected by Mucormycosis after he was administered steroids by a doctor who overlooked his diabetic condition. “I went to a premiere hospital in Delhi and I was given Amphotericin-B for 4 days and then the hospital said they don’t have the medicine. Each vial of this drug costs 7000 and in one day I needed 7 vials. We tried a lot to buy this drug and it was not available anywhere and because of that we bought an alternate medicine but this alternate medicine has a negative effect on the kidneys,” he said.

So far, no effort has been made to reduce the price of this life saving drug or give free treatment and medicines to patients from poor backgrounds. However, the drug is being sold at skyrocketing prices by many black marketeers. Recently, an FIR was registered in Bangalore by a family who claimed that they were siphoned off 7.9 lakh rupees with the promise of the drug.

“My concern now is even if you have money, the medicine is not available. As a common citizen who has gone through this, I feel that announcements are made everywhere by the government but at the ground level nothing is getting implemented and many patients are suffering,” added Satapathy.

On Friday, Prime Minister Narendra Modi admitted that black fungus has emerged as a new challenge for the government and asked the frontline workers to take adequate measures to deal with the situation. The Delhi High Court on Thursday had asked the Centre to import Amphotericin-B from wherever in the world and save lives.

“I was struggling to arrange Amphotericin-B for a patient. It was unavailable and then we arranged another alternate medicine. Now the situation is so grave that even the alternate medicines are not available. Unless and until the government does something, it’s going to be very difficult for the common man,” said S.R Mahapatra, who works with a medical equipment trading company.

A patient suffering from black fungus | by special arrangement

Black fungus takes away your dignity

Mucormycosis is simply not just dangerous but many doctors say it takes away the dignity of a patient. “For most of the affected patients, their entire financial resources get drained when they get their treatment for Covid and then when they get hit by black fungus, they simply cannot afford it. In India, bypass surgery is considered to be an expensive surgery but this black fungus related treatment is 3 times more expensive than a bypass. The poor cannot afford Amphotericin-B. It is a curse to be poor in India,” said Dr. Sandeep Gore who is a Director at the Emergency Medicine department at Fortis hospital in Mumbai.

Many patients affected by black fungus require treatment from different surgeons, for instance ENT surgeons, faciomaxillary surgeons and ophthalmic surgeons treat most of these patients. Many frontline doctors told The Probe that it’s not just the affordability of medicines but unavailability of such specialist surgeons in rural India has made this disease one of the worst nightmares for the poor.

Dr Supriya Kokane, who is an Associate Professor at the MGM Medical College in Navi Mumbai says she recently saw 10 complicated cases of black fungus out of which 2 patients succumbed. “The medicines are not available now but the Maharashtra government has assured us that they will soon treat the black fungus patients for free under the government’s Mahatma Jyotirao Phule Jan Arogya Yojana. We are hoping that this happens soon.” 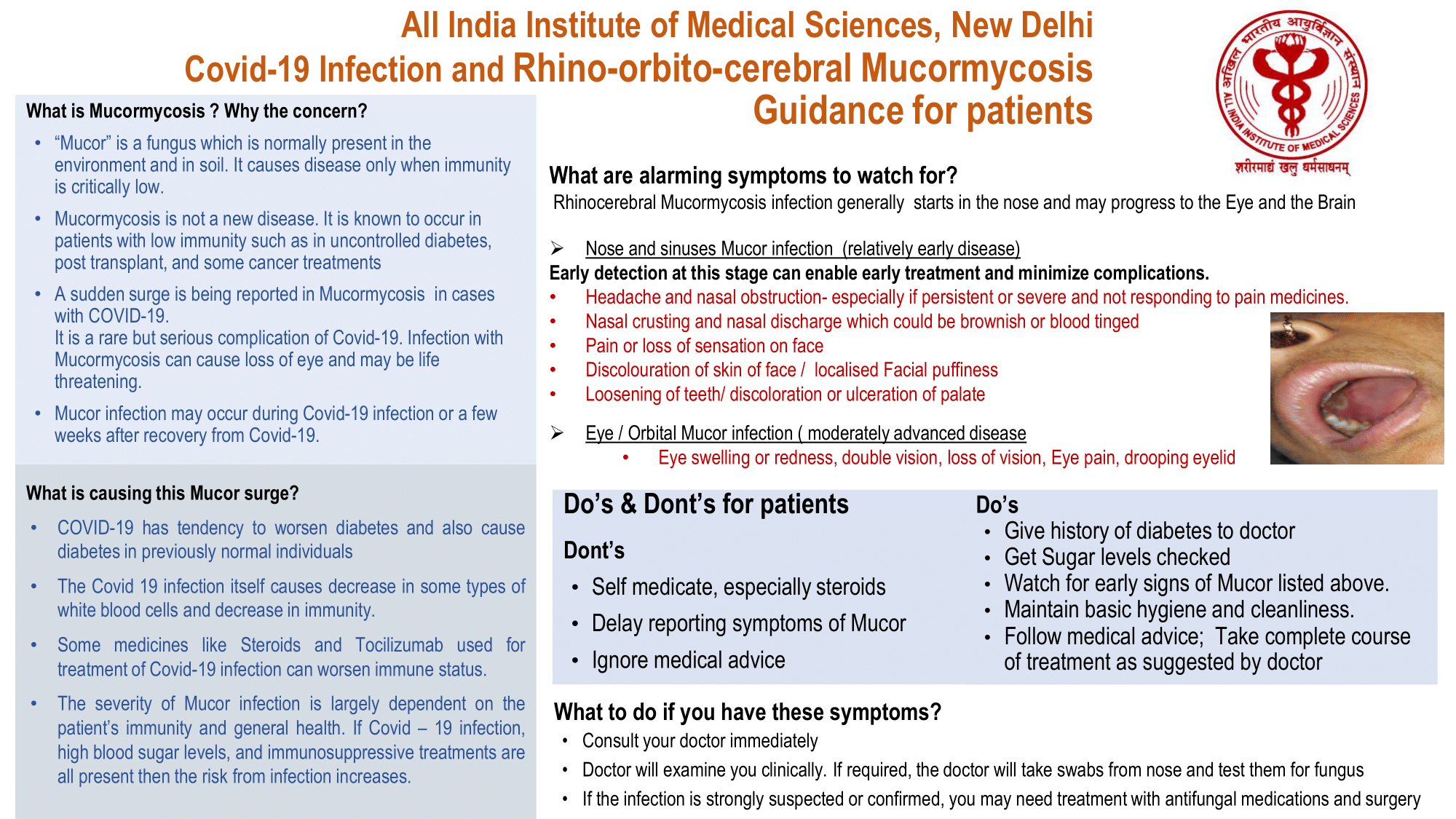 Black fungus: a race against time

“If you don’t treat the patient within 6 days, you will lose the patient. Treatment of Mucormycosis is a race against time. You have to diagnose early and you have to treat it early. If a Covid patient wakes up in the morning and sees some swelling over the cheek or the eye or if there is nasal pain or some black spots over the cheek, he should immediately go to the emergency department or meet an ENT specialist. If he misses the treatment by 5 days, his chances of death increases by 75 percent,” said Dr. Gore.

Speaking to The Probe, Dr Sanjeev Arora an ENT Surgeon with Max Hospital in Delhi said, “50 percent job is done through surgery and 50 percent through medicines. The first choice of medicine is Amphotericin-B and it is not available in the market. Conventional medicines are given by many doctors in place of Amphotericin-B, which is not good as it affects the kidneys. Parallel medicines like Posaconazole are not the first choice of treatment. Something must be done to immediately stop the hoarding and blackmarketing of these drugs as it is adversely affecting a lot of our patients”.

Within three days, 5 more Pharma companies have got New Drug Approval for producing it in India, in addition to the existing 6 pharma companies. (1/2) pic.twitter.com/hm9KiZgxr4

The Centre meanwhile has said that five more companies will be allowed to make the drug Amphotericin-B. “Whatever has to be done, it has to be done immediately to save patient lives. Posaconazole is a second line of drug, which must be given along with Amphotericin-B but today most are using this as the first line of treatment, which is extremely dangerous for the patient. Our hospitals are seeing a rise in the number of patients. In the days to come, we are expecting the numbers to go even higher as some patients who were affected by Covid-19 in the second wave may start getting symptoms of black fungus in the coming days, ” said Dr Sanjay Bhatia, a senior ENT consultant with Fortis Hospital in Mulund.

Most doctors and patients we spoke to have confirmed that as of now, this life saving drug is just not available. For patients who cannot afford the drug, the government’s intervention of increasing the number of manufacturers of the drug is not going to be enough. Most healthcare professionals agree that those who cannot afford the treatment must get free admission, treatment and medicines from select hospitals across the country and the government should work towards this effect. Unless this is done, India will continue to see a rise in black fungus related deaths especially in the rural population.

If you like this story and if you appreciate our Ad-Free Independent Journalism platform, show us your support by becoming our Member. Our Journalism can only sustain itself and survive if well-meaning people like you pay for news. Click here to become our Member.
TagsAmphotericin-BBlack fungusCovid-19HealthcareMahatma Jyotirao Phule Jan Arogya YojanaMedicine crisisPublic healthRural health
Related articles More from author More from category
PrevNext