Can India trust an unreliable US-led Quad at the cost of its own foreign policy? - The Probe

Can India trust an unreliable US-led Quad at the cost of its own foreign policy?

by Sanjay Kapoor
ColumnsStories
Home » Columns » Can India trust an unreliable US-led Quad at the cost of its own foreign policy?
READ 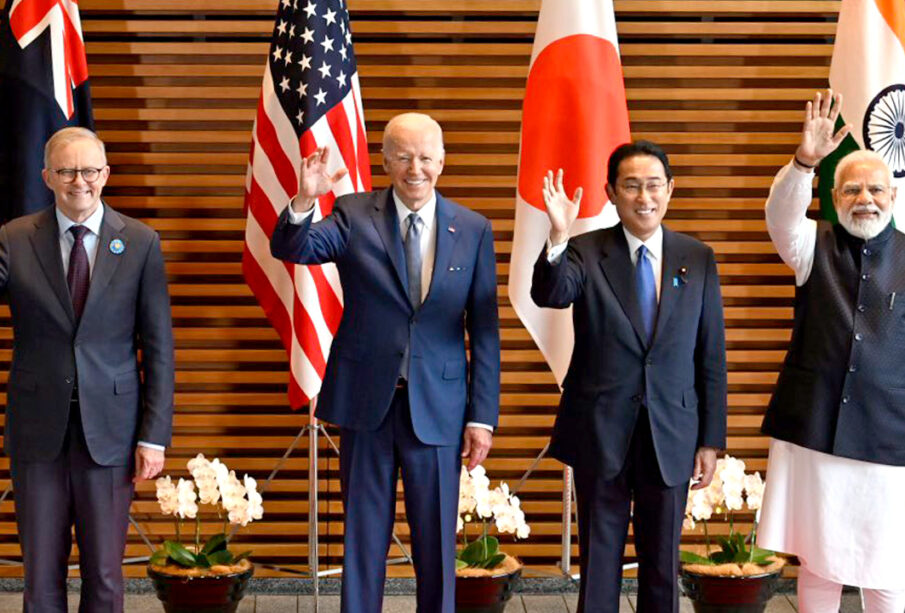 Caption: Quad leaders at the Quad Summit in Tokyo (May 2022) | Photo courtesy: @AlboMP

The statement issued after the in-person meeting of the Quad leaders last week visibly had an Indian impression. The four-member group comprising the United States, India, Japan, and Australia was meant to create synergy between the four countries to build supply chain resilience, enlarge the production of vaccines to fight the pandemic and focus on issues related to climate change. In the statement that was released after the Tokyo meet also took into cognizance India’s concerns on terrorism, where it demanded that the perpetrators of the Mumbai and Pathankot terror attacks should be brought to book.

Besides, the statement also reminded the world that Afghanistan, which became the reason for declaring a very detailed global war on terror, was still a country of concern, and its soil should not be used to launch strikes anywhere. Despite denials, Quad was looking like a defence construct directed at China and Russia.

In a way, this was the return of terror discourse that the United States had been trying to make the world forget ever since Russia crossed into Ukraine on February 24, 2022. Since then, the US government has ratcheted up – along with its western allies – the fundamental issue of how autocracies like that of Russia and China have little respect for the sovereignty of their neighbours. Russia’s war on Ukraine and the reaction of the West was also packaged as the conflict between democracies and autocracies. Past credentials of the US and how they have supped with autocracies all over the world did not help their cause.

India was not really convinced by this logic peddled by the US on the sovereignty issue and jettisoning of Russia as a trusted friend and making light of terror as a threat to nation-states. Instead, New Delhi continued to anchor its foreign policy by underlining issues revolving around terror as it put Pakistan on the defensive and also showed violence and instability in the Kashmir valley as the handiwork of Islamabad’s intelligence agency, ISI, and its covert outfits.

The global terrorism index for the year 2022 shows that there has been a perceptible fall in deaths due to terrorism in the middle east and other parts. The report notes that there has been a 33 per cent reduction since the peak in 2015 when 10,699 people were killed in terrorist attacks. It is only in the Sahel region of Africa that there is some escalation in violence. The rest of the world has seen a steady decline in violence. Even terror violence expected during the Covid pandemic has been very low.

By any reckoning, this was a convenient moment for the US to reshuffle its priorities and its terms of discourse after it hastily abandoned Afghanistan and allowed the Taliban to take over the landlocked country. But this shift did not sit well with India.

Why foreign policy has domestic implications As the US lined up all its allies in a row to disenfranchise Russia, it found in India, a country it has wooed for the past decade or more, playing hardball. New Delhi was confronted with the difficult choice of either remaining aligned with the US-led western alliance or strengthening the Eurasian triumvirate of Russia, China and India. There is no easy option here, as taking any side would irreversibly change India’s foreign policy and cast its long shadow on national politics. There are reasons.

One of the major implications of the Ukrainian war has been a seemingly unheralded end to the murderous global war on terror spearheaded by the West and the US. It has been a bloody war. According to conservative estimates, about a million people lost their lives at the cost of $8 trillion. In Afghanistan (including the warzone in Pakistan), 241,000 (Watson institute study of 2021) had died. This is seen as a gross underestimation but gives a sense of the killings. A big majority of them were Muslims.

More than the human loss in Afghanistan, Iraq, and Syria, which has been considerable, US President George Bush announced this war with choreographed grimness in 2001. Destroying and devastating nations and communities, this nasty and brutish war has contributed to fanning Islamophobia in plural societies that re-shaped domestic politics and voting behaviour in democracies. While there would be no admission from any country, but much of the killings and kidnapping of youths by the security forces in the sub-continent and outside, either to target al-Qaeda or Islamic terrorists, emanated from technical intelligence from US’s Central Intelligence agency (CIA), NSC and its collaborators in the West and elsewhere.

The war on terror shaped politics in many countries, allowing terror incidents triggered by covert agencies to reshape the narratives and politics of different countries. In Spain, for instance, a bomb explosion on a train changed people’s preference for who could be the President of their country. More recently, the blast was blamed on some covert outfit. Similar incidents that exacerbated Islamophobia were taking place everywhere. Most Hollywood films changed their villains from a KGB agent to a clone of turban-wearing Kalashnikov wielding Osama bin Laden. In India, too, WikiLeaks shows that Bollywood scriptwriters were trained by US agencies to craft scripts on Islamic terror.

We all know what happened thereafter. In a society like India, where Hindus and Muslims live cheek by jowl, the neighbour became the enemy – someone to be mistrusted. The politics of the last two decades is now based on this deep suspicion of the Muslims who are blamed for every conceivable absurdity, as witnessed in 2020 – the spread of coronavirus by the Tablighi Jamaat. Due to all this and more, the vote of Muslims has been rendered irrelevant in many parts of the country where politics is majoritarian and visibly high strung. There are many who pine for the days when aggravated hate between communities did not influence voting behaviour.

This colossal investment, which the US and its allies made in controlling the narrative and demonising a religion as the enemy of civilised society, is being turned upside down by this Eurocentric conflict. The first indication that this seemingly unending war that divided societies – pitting Shias against Sunnis and Muslims against everyone else – was visible when the US troops ignominiously exited from the 21-year-old Afghan conflict. It was a matter of time before what filled its place. India feared that Afghanistan and its radicalised leadership would present a clear and present danger to the region, but without US’s presence in the conflict, it did not.

Now, the Ukrainian war is changing paradigms of global diplomacy and politics. In the space of a few months, this fratricidal war has escalated to a point where Russia and the US keep dropping suggestions that the conflict could lapse into nuclear or chemical warfare. Such aggravation seems unlikely, but as Eastern Europe is unfamiliar with wars on its cold and inhospitable terrain, such talks bring back the violent memories of world wars and the Balkan Wars, which saw blood, gore, and bereavement of near and dear ones.

What Russia has done is a violation of the UN charter, but there is some merit that they were driven into it by the games that Washington was playing with Ukraine. The US has now imposed sanctions that have few parallels in global history. And they began to unfold within the few days of the war. SWIFT messaging system that allows international transactions to go through banking channels threw out the Russian banks. All European and US companies pulled themselves out of Russia. Genuine fears are expressed in Europe and other countries about collapsing growth rates even when EU countries are exempted from sanctions for buying oil and gas from Russia. Russian President Vladimir Putin has made it clear that he will sell fuel to only those countries of Europe that pay in Ruble. This is what Putin wants – de-dollarisation of the world economy.

In this crisis, when the US is strained all its sinews to undermine the viability and influence of Russia, what happens to all its intelligence and military investment that it has made in its much vaunted fight against terror? Being the legatee of the Soviet Union that came to grief in Afghanistan in 1979 due to US support and sponsorship of Mujahideen, Russia does not trust the US and its claim to fighting Islamic terror. They seemed to have got corroboration of US involvement in Syrian troubles during their military operations in the West Asian country. Russians fear that the US might ignite trouble for them by using the restlessness of the unemployed Islamic State militants based in Afghanistan to cause difficulty in countries of Central Asia, which are under its protection. If the US manages to use its influence in these parts, it could stretch Moscow’s military resources.

The recent visit of the Chinese Foreign Minister Wang Yi to Afghanistan and the Organisation of Islamic Countries was meant to prevent possible manipulation of these Islamist fighters by western forces in this European war and maintain its sway over the Taliban, which has been ignored by the international community. His trip to Islamabad was also meant to fill in the vacuum that has been created by the US slide as the guarantor of security in this region. After how Afghanistan was abandoned by Washington, the chatter in these groupings is that the US will not stand by its allies. At a time when this recalibration of relationships is taking place – the big question remains – what happens to the 22-year-old unending war and the politics it spawned in its wake? Will we see another horizontal escalation manifested by increased terrorism to keep Russia and China in check in Asia?