Channi takes oath as new Punjab CM, Rahul to rein in dissent to keep Punjab unit together - The Probe

Amid row between Harish Rawat and Sunil Jhakar over the CM face of 2022, party sources say CM face will not be revealed until next year
The Probe Newsdesk
India
READ 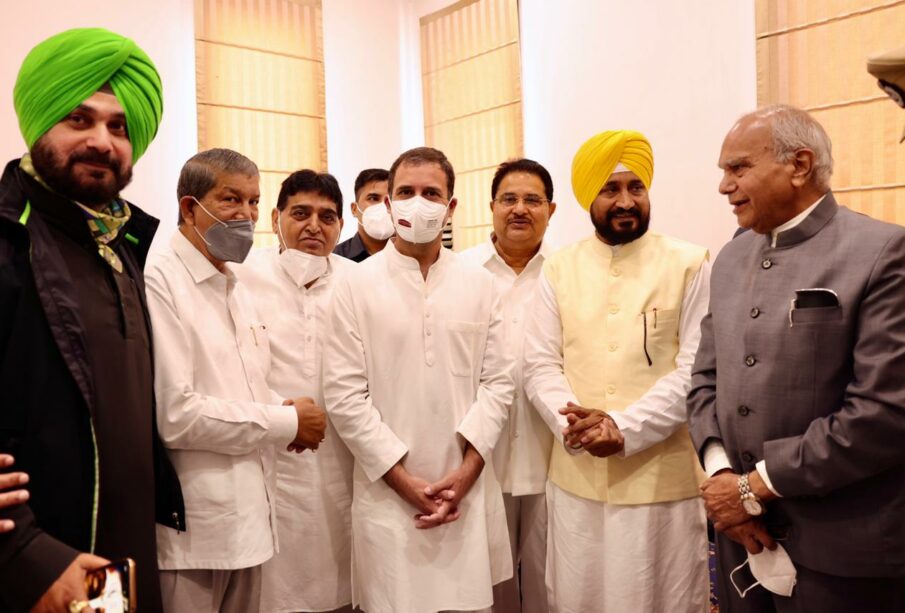 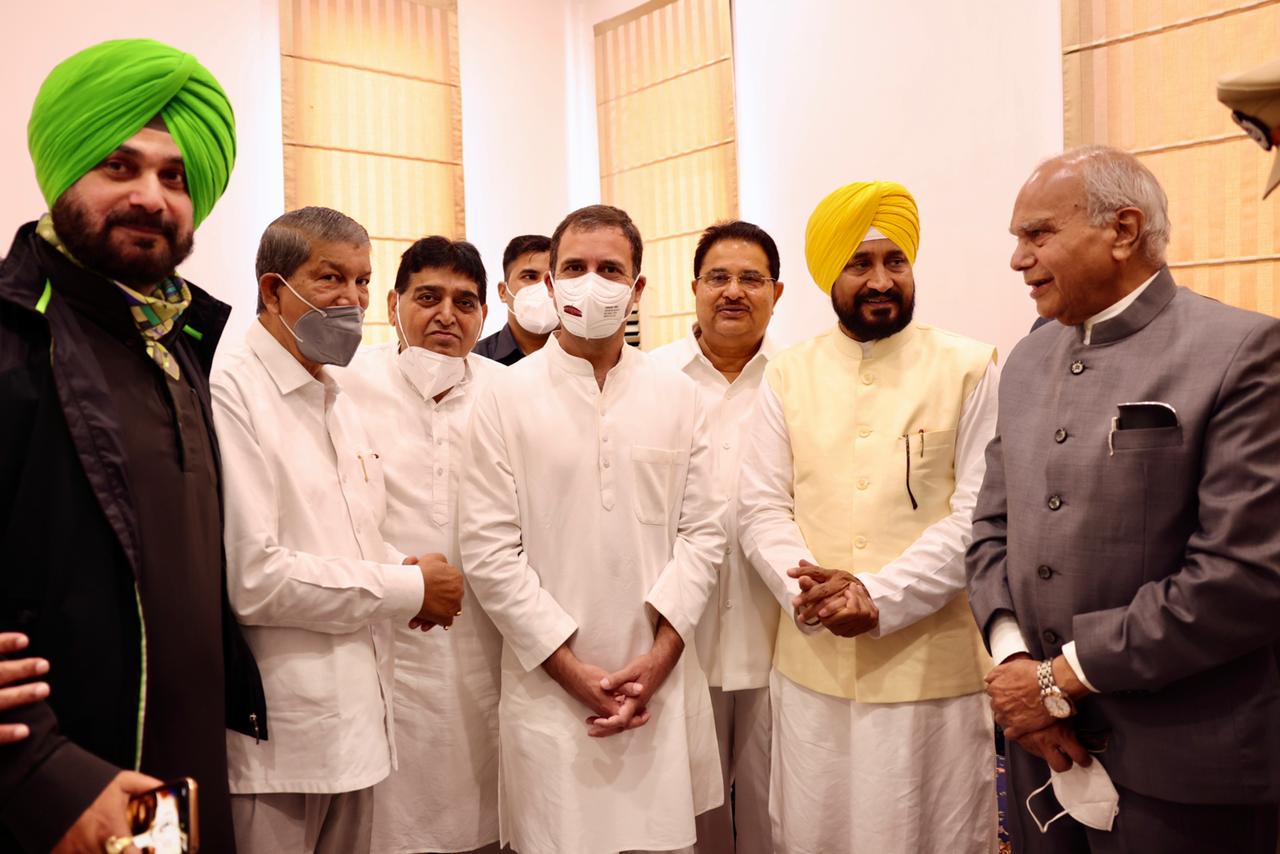 The infighting within the Punjab state unit seems to be the biggest crisis facing the Congress party, which is gearing up for the 2022 assembly elections. After the ouster of Captain Amarinder Singh as the Punjab CM, Charanjit Singh Channi took oath as the first Dalit Chief Minister of the state today. OP Soni and Sukhjinder Randhawa also took oath as the Deputy Chief Ministers along with Channi at the Raj Bhawan in Chandigarh. But the Congress party is now faced with the herculean task of reining in dissent with multiple factions within the Congress openly expressing their angst at senior leaders from the rival factions within the party. 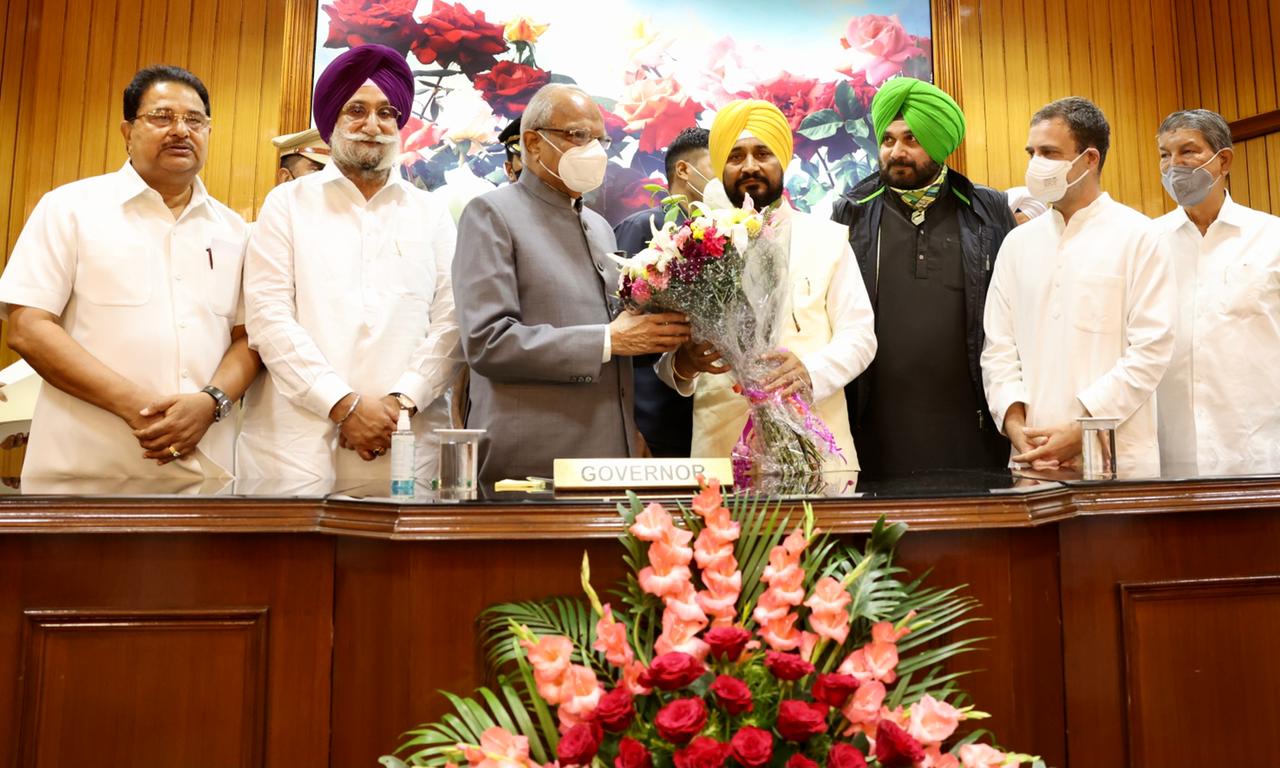 Congress leader Rahul Gandhi also attended the swearing-in ceremony today alongside Punjab affairs in-charge Harish Rawat and party PCC President Navjot Singh Sidhu. However, the ex CM Captain Amarinder Singh skipped the event. According to party sources, Congress leader Rahul Gandhi will take the lead in curbing dissent within the various factions as soon as the new CM assumes chair. “Captain Amarinder Singh was inaccessible. Ministers and MLAs often complained to us that he wouldn’t meet them. He would more or less be confined to his farmhouse and not go to office. He stopped travelling and was not active. We could not have faced the upcoming polls with such passive leadership. Yes, there has been dissent but the decision to have a new replacement was a well-planned one,” said a highly placed party source.

The recent statement of Punjab Congress in-charge Harish Rawat that the party would fight the 2022 Punjab polls under the leadership of Punjab PCC chief Navjot Singh Sidhu has once again divided the party with senior leaders expressing dissent and taking sides. Congress leader Sunil Jhakar this morning retaliated on the social media against Rawat’s statements by saying that it was baffling to see Rawat make such statements on a day when the new CM Charanjit Singh Channi was taking oath. He also said that such a statement undermines the CM’s authority and negates the very reason of his selection for the position.

On the swearing-in day of Sh @Charnjit_channi as Chief Minister, Mr Rawats’s statement that “elections will be fought under Sidhu”, is baffling. It’s likely to undermine CM’s authority but also negate the very ‘raison d’être’ of his selection for this position.

Responding to the latest controversy, sources within the Congress high command confirmed to The Probe that the party has not decided on the CM face for the 2022 polls. According to sources, the party is not expected to reveal the CM face for the upcoming polls until next year. Back in the state unit, leaders feel that the 2022 polls will be a litmus test for the party. Many believe that the anti-incumbency wave and the infighting within the Congress may have just opened the door for the Aam Aadmi Party to emerge as a worthy contender. The past association of the Shiromani Akali Dal with the BJP and the discontentment amongst the people over the farm bills squarely makes the AAP and the Congress, the two big contenders for 2022.

Senior Congress leaders feel that if the party is able to rein-in dissenting factions; if it can retain the traditional votes; and crack the Dalit votes, it will have a huge chance to just bounce back to power. But with an outspoken PCC chief Sidhu openly anchoring revolt against a just-ousted CM, a party in-charge Harish Rawat whose statements have just opened a new can of worms, a leader like Sunil Jhakar who has openly expressed his resentment on the party affairs on the day the new CM was sworn-in, coupled with a popular ex CM Captain Amarinder Singh calling the party PCC President anti-national – the Congress high command is faced with a huge task of holding a state unit together which is at the verge of crumbling like a house of cards.

The real challenge is no longer governance as most leaders within the party agree. With a few months left for the polls, the new CM Channi cannot accomplish much in terms of governing the state. The Punjab affairs in-charge Harish Rawat is expected to get busy with the upcoming elections in Uttarakhand, in that scenario the party may just look for a new in-charge to handle the Punjab affairs.

Meanwhile, all political parties are expected to play the Dalit card this time to garner votes. The Dalits in the state comprise an SC population of nearly 32 per cent as per the last census. The Congress’s new CM is the first Dalit CM of the state. The SAD has allied with the BSP to attract the Dalit votes which is considered as a vote bank of Mayawati’s party. The opposition parties have announced that Dalits will hold top positions if their parties come to power in the 2022 polls. The Congress’s decision to field Channi was a move to outsmart the other opposition parties in the race to woo the Dalit votes but if Rahul Gandhi is unable to crack the whip on dissenting factions and put his house in order, it is likely that the party may pay a heavy price in the upcoming polls.