Most child brides in India are victims of either poverty, pandemic or patriarchy. In this Podumentary, we speak to experts who have been at the forefront of fighting this social evil.
Podumentary 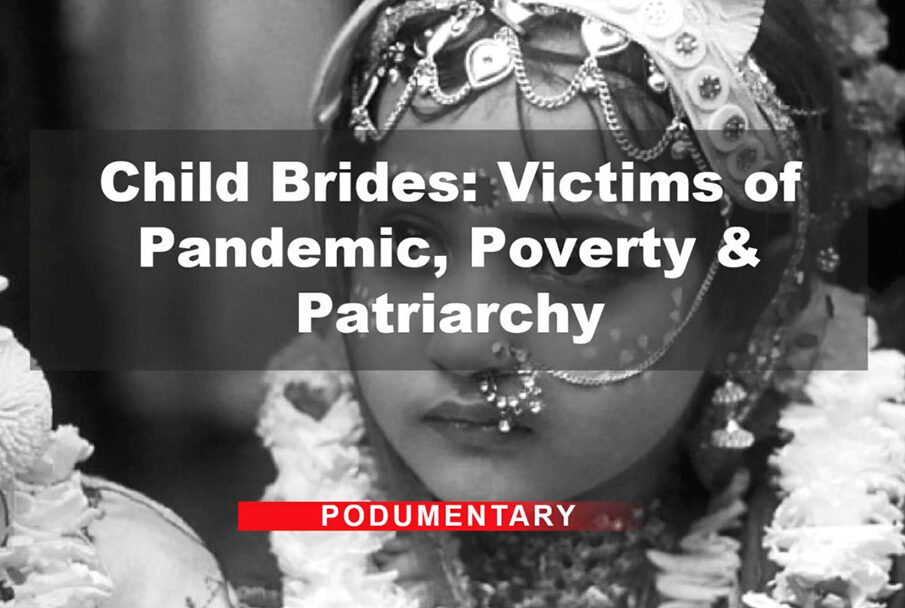 According to the latest demographic sample survey by the Ministry of Home Affairs, Jharkhand and West Bengal are the two states in India where more than half of the women are married off before attaining 21 years of age. As per UNICEF, one in three of the world’s child brides live in India. Of the country’s 223 million child brides, 102 million were married before turning 15.

Most child brides in India are victims of either poverty, pandemic or patriarchy. In this Podumentary, we speak to experts who have been at the forefront of fighting this social evil.

Produced below are the abridged version of the transcripts of our Podumentary (audio documentary) titled: Child Brides: Victims of Pandemic, Poverty & Patriarchy

According to the latest demographic sample survey by the Ministry of Home Affairs, Jharkhand and West Bengal are the two states in India where more than half of the women are married off before attaining 21 years of age. As per UNICEF, one in three of the world’s child brides live in India. Of the country’s 223 million child brides, 102 million were married before turning 15.

Karminder Kaur, a Child Marriage Prohibition Officer with the Haryana government, says she has rescued numerous girls from forceful marriages, and the cases are only increasing.

“I am a Protection Officer under Domestic Violence Act and a Prohibition Officer under Child Marriage Prohibition Act with the government of Haryana. A few days back, we intervened in a marriage where the girl was around 12 years of age. You can imagine the plight of a 12-year-old when she gets entangled in marriage at such a young age.”

In another case, Kaur and her team rescued a 14-year-old girl. “In one case, we received a complaint from a 14-year-old girl, where the girl herself called us. We called her parents and explained to them that until the girl turns 18, they cannot get her married. During that period, they gave us in writing in an affidavit that they would not get her married, but they secretly married her off. The girl was subjected to sexual violence when she stayed with her husband. She ran away from there. The police later rescued her from Nepal. We took this case seriously because she was a 14-year-old girl. We charged this case under the POCSO Act, JJ Act and Child Marriage Prohibition Act. We filed an FIR against the girl’s father, father-in-law and husband. As POCSO Act and JJ Act were charged, the husband received ten years imprisonment. The girl’s and boy’s father were also sentenced to six months imprisonment.”

A few days back, the Supreme Court agreed to examine a petition of the National Commission for Protection of Child Rights (NCPCR), which challenged an order of the Punjab and Haryana Court that allowed a minor Muslim girl to marry. The NCPCR stated that the court order violated the provisions of the POCSO Act and amounted to sexual assault of minors. While the practice of child marriage is sometimes institutionalised in the country, Kaur says the larger challenge is to bust organised crime syndicates that thrive in buying and selling child brides in exchange for money.

Ghosh speaks of a case in Haryana where the girl population of an entire village fell drastically after the villagers practised female foeticide so much that women from other states had to be brought in to marry off the men in the village. “It is heart-wrenching if you go to the ground. If you see the number of female foeticides that have happened in Haryana. It is unbelievable. Many villages in Haryana during the years 2014 to 2018 did not have females to get their sons married to. Girls from West Bengal and Assam were trafficked into the village. There is a village in Haryana where the entire village is filled with only minor girls from West Bengal. There were so many cases of female foeticide reported in that village because of which there were no females left.”

“As per the NCRB data, a fifty per cent rise was recorded in 2020 over the previous year. The reason was that during the pandemic, people lost their jobs and they lost their houses. So, labourers were in mass migration. So, there were safety concerns about taking their young daughters along with them. So, they just married them off. That would also mean one less mouth to feed. There were also numerous instances where girls were given in exchange for money,” says Deswal.

A recent report by the United Nations indicated that forced marriages had increased in countries like India and Bangladesh. To tackle the problem of child marriage, the Indian government announced its decision to raise the legal age of marriage for women from 18 to 21. While the Bill has good intentions, Deswal feels its implementation will be a major challenge.

“The Bill regarding amendment of the Child Marriage Prohibition Act is still pending before the Parliament in which they have proposed to raise the age of marriage of girls also to a minimum of twenty-one years, and this is to bring uniformity between marriageable age of both boys and girls. In 1962, the UN passed a convention on the minimum age for marriages. India is not a signatory to that, but we have signed CEDAW, Convention on Elimination of Discrimination Against Women, which also talks about eliminating child marriage and uniformity in marriageable age for men and women. This amendment is in consonance with that convention which is our obligation. Although, when it comes to eighteen, we have not been successful in implementing this age. So, if we further raise this age to twenty-one, how successful would we be?”

India’s laws regarding child marriage are vague and open to interpretation. That apart, there have been serious concerns regarding pandemic-induced child marriages. Poonam Muthreja, Executive Director of the Population Foundation of India, says that child marriage is not just one problem but carries many associated risks and issues.

“Girls who marry early experience a lot of violence in their married homes. The burden of work given to younger girls is enormous, and young couples do not have the agency or access to family planning methods, and a girl is expected to prove her fertility as soon as she gets married. Sixty per cent of the girls in India are undernourished, and there is a very high level of anaemia, especially amongst adolescents, which has actually increased in recent times.”

Child marriage ends childhood. Laws are necessary, but in the case of child marriage, laws are not enough to necessitate change. Yogesh Vaishnav, Co-founder of Vikalp Sansthan, says implementation is key to eradicating child marriage. “We are a democratic country, and our constitution is also very progressive. However, consider the implementers in our country. The implementers have the same mentality. They come from the same society and ideology. To solve this issue, I firmly believe that girls and boys must get quality education and healthcare. That is the key to solving the problem.”

Child marriage is also a result of a patriarchal society. But patriarchy is not about men. Pallabi Ghosh notes that women, too, support the system of patriarchy just as much as men do. “Patriarchy is not about men. Patriarchy is a system. It’s a thought process. Women also practise patriarchy. We always keep talking about gender-based violence against women. Of course, eighty per cent of women are victims of gender-based violence, but we also have to note that twenty per cent of men are also victims of it. So, that’s where I change the narrative. I talk to men also. In every village I travel to in India, I talk to men as much as I talk to women because you cannot bring change just by educating women. You need to talk to men also.”