For the first time, evidence in terms of documents and research have emerged that points towards Chinese involvement in the Covid-19 outbreak. The latest series of disclosures in The Australian, a broadsheet newspaper published by News Corp Australia points towards the possibility that the Coronavirus pandemic after all may have been a man-made disaster.

Much before the Covid-19 outbreak hit the world, reports suggest that in 2015 itself, the Chinese People’s Liberation Army and senior Chinese public health officials discussed weaponising SARS Coronaviruses.

The story on Chinese knowledge of the Coronavirus way back in 2015 was reported by Sharri Markson,  Investigations Editor at The Australian and host of prime-time show Sharri on Sky News Australia. The details of Markson’s investigation into the origin of the Coronavirus is encapsulated in her upcoming book ‘what really happened in Wuhan’ – that will be published by Harpercollins and is expected to hit the stands in September 2021. 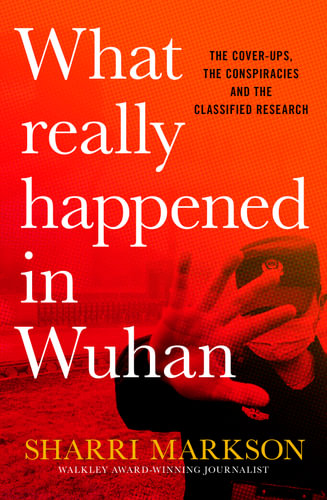 Cover page of Sharri Markson’s book that will hit the stands in September 2021 | Courtesy: www.booktopia.com

According to Markson’s news report in The Australian, the Chinese officials described SARS Coronaviruses as heralding “a new era of genetic weapons”. The news report mentioned that PLA scientists and senior Chinese public health officials had stated in a paper in 2015 that the Third World War will be fought using biological weapons.

According to The Australian, the 263-page Chinese paper titled “The Unnatural Origin of SARS and New Species of Man-Made Viruses as Genetic Bioweapons”, speaks volumes about China’s research into biological warfare. The journalist in her news report claimed that the Chinese paper was published by the Chinese Military Medical Science Press, which is a Chinese Government owned publishing house managed by the General Logistics Department of the PLA. According to Markson’s newsbreak, the Chinese paper was authored by 18 members who belonged to the Chinese health department and the PLA. 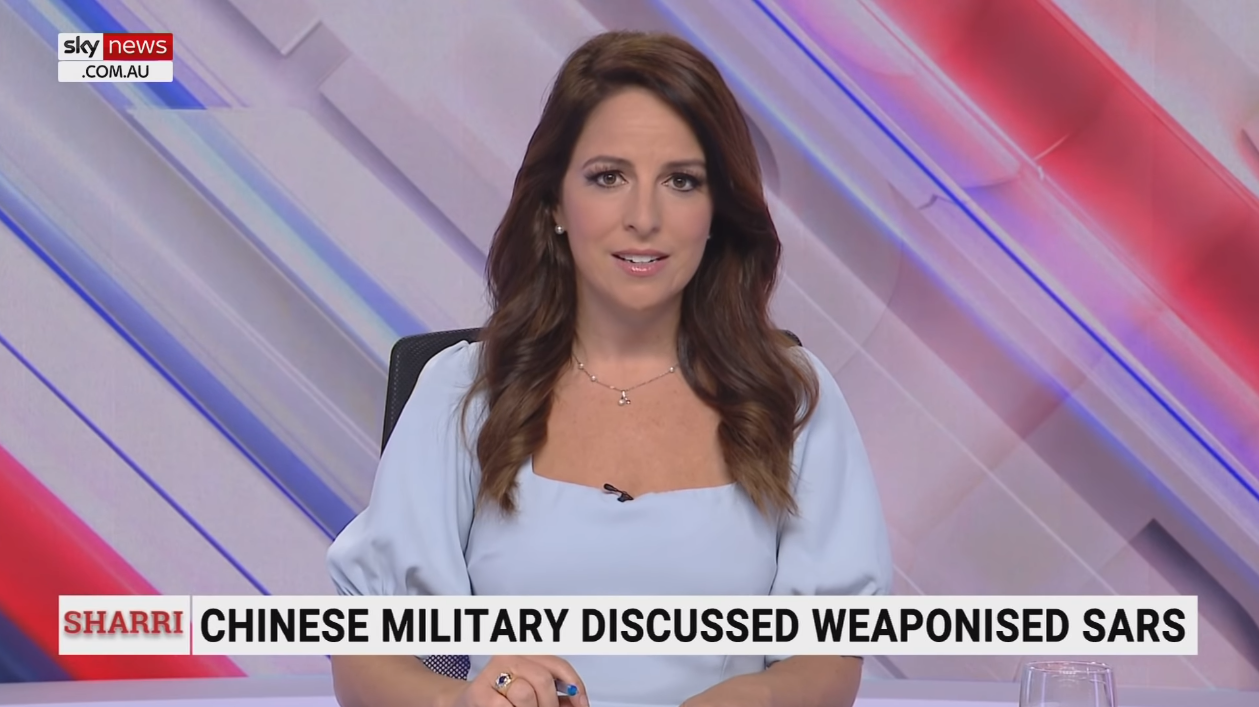 According to the news report, the 2015 Chinese paper stated that the virus could be artificially manipulated into an emerging human disease virus, which can be weaponised and unleashed in a way never seen before.

Markson claims that her book on the subject, which will hit the stands in September this year has exclusive primary documents exposing China’s early cover-up of the virus. With whistleblower doctor interviews and eye witness accounts from Wuhan, the author claims that the book exposes the untold story about the origins of the Coronavirus.

A news show in Sky News Australia anchored by Markson that discussed the Chinese paper, said that the 2015 document also suggested the best conditions in which a biological attack could be unleashed. The news host said that the Chinese documents stated that bioweapon attacks are best conducted during dawn, dusk, night or cloudy weather because intense sunlight can damage the pathogens. It also said that biological agents should be released during dry weather. The paper, as per the news report also suggested that rain or snow can cause the aerosol. particles to precipitate. It also says that a stable wind direction is desirable so that the aerosol can float into the target area.

The shocking revelations in the news report suggests that the Chinese also allegedly discussed how a sudden surge of patients requiring hospitalisation during a bioweapon attack could cause the enemy’s medical system to collapse. According to the newsbreak, the Chinese also discussed the psychological terror the biological weapons can cause. 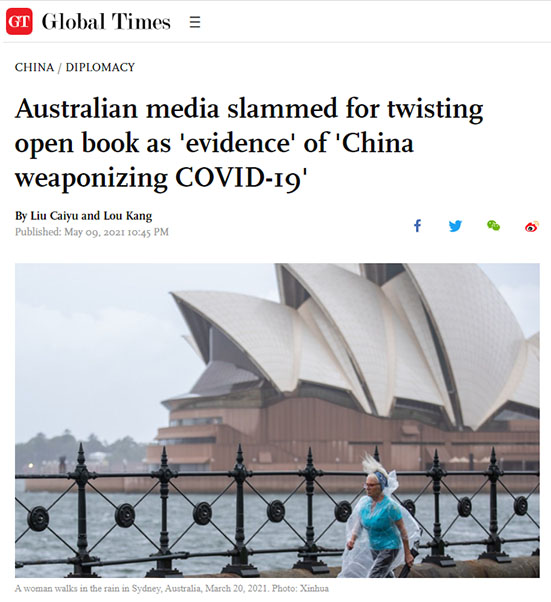 Calling The Australian news report “twisted”, Global Times, a Chinese state-run tabloid newspaper said that the Chinese book was openly on sale and slammed The Australian for showing it as a “leaked” exclusive document.

Global Times went on to say that the book titled “The Unnatural Origin of SARS and New Species of Man-Made Viruses as Genetic Bioweapons” was published by Chinese military doctor Xu Dezhong in 2015 and was openly on sale on Amazon, although it is out of stock now. The Chinese state-run media claimed that through such an article anti-China forces in Australia were trying to back their own ideology against China at the expense of basic professional journalistic ethics.

However, The Australian report claims that Senior US State Department officials had access to the 2015 Chinese papers last year itself during the US investigations into the origin of the Coronavirus. In an opinion piece in the Wall Street Journal in February 2021, former US Secretary of State Mike Pompeo hinted at China’s role in Covid-19 outbreak. 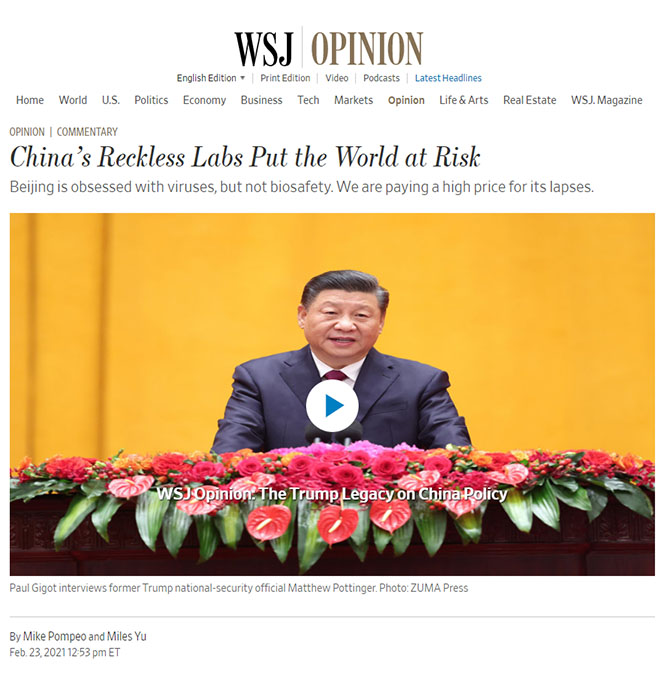 In the article titled, China’s reckless labs put the world at risk, Mike Pompeo wrote: “The evidence that the virus came from Wuhan is enormous, though largely circumstantial, and most signs point to the Wuhan Institute of Virology, or WIV, as the source of Covid-19.”

Meanwhile, the World Health Organisation has been heavily criticised for its handling of the pandemic. The WHO team had embarked on a Wuhan field visit from 14 January to 10 February 2021. The WHO was supposed to identify the zoonotic source of the virus and the route of the introduction of the virus into the human population but instead of finding conclusive answers – when the fact-finding team got back with a report – the WHO Director General Dr Tedros Adhanom Ghebreyesus just called for further research and studies.

In a press statement, he said: “As far as WHO is concerned, all hypotheses remain on table. This report is a very important beginning, but it is not the end. We have not yet found the source of the virus, and we must continue to follow the science and leave no stone unturned as we do.”

Scientists and Virologists in the past have pointed towards mounting evidence on the role of China for the outbreak of the virus. In the light of the latest developments on the alleged Chinese papers of 2015 on Coronavirus – and if the content of the papers are true as is being reported by The Australian – the spotlight then is on the WHO on how its high-level fact-finding team missed to catch onto the crucial leads during their investigation. However, it is to be noted that none of the mainstream international reputed media organisations have picked up the story of The Australian though Indian media has extensively reported on the subject.

If you like this story and if you appreciate our Ad-Free Independent Journalism platform, show us your support by becoming our Member. Our Journalism can only sustain itself and survive if well-meaning people like you pay for news. Click here to become our Member.
TagsBiological warfareCoronavirusCovid-19Genetic BioweaponMan-Made VirusPandemicSARSSharri MarksonXu Dezhong
Related articles More from author More from category
PrevNext