A woman’s hand protrudes from a body bag. A family member tucks it in. An onlooker asks him to tie the victim’s hands and he helplessly follows instructions. The disturbing scene is symbolic of the storm of grief that has overtaken India – the epicentre of the pandemic. 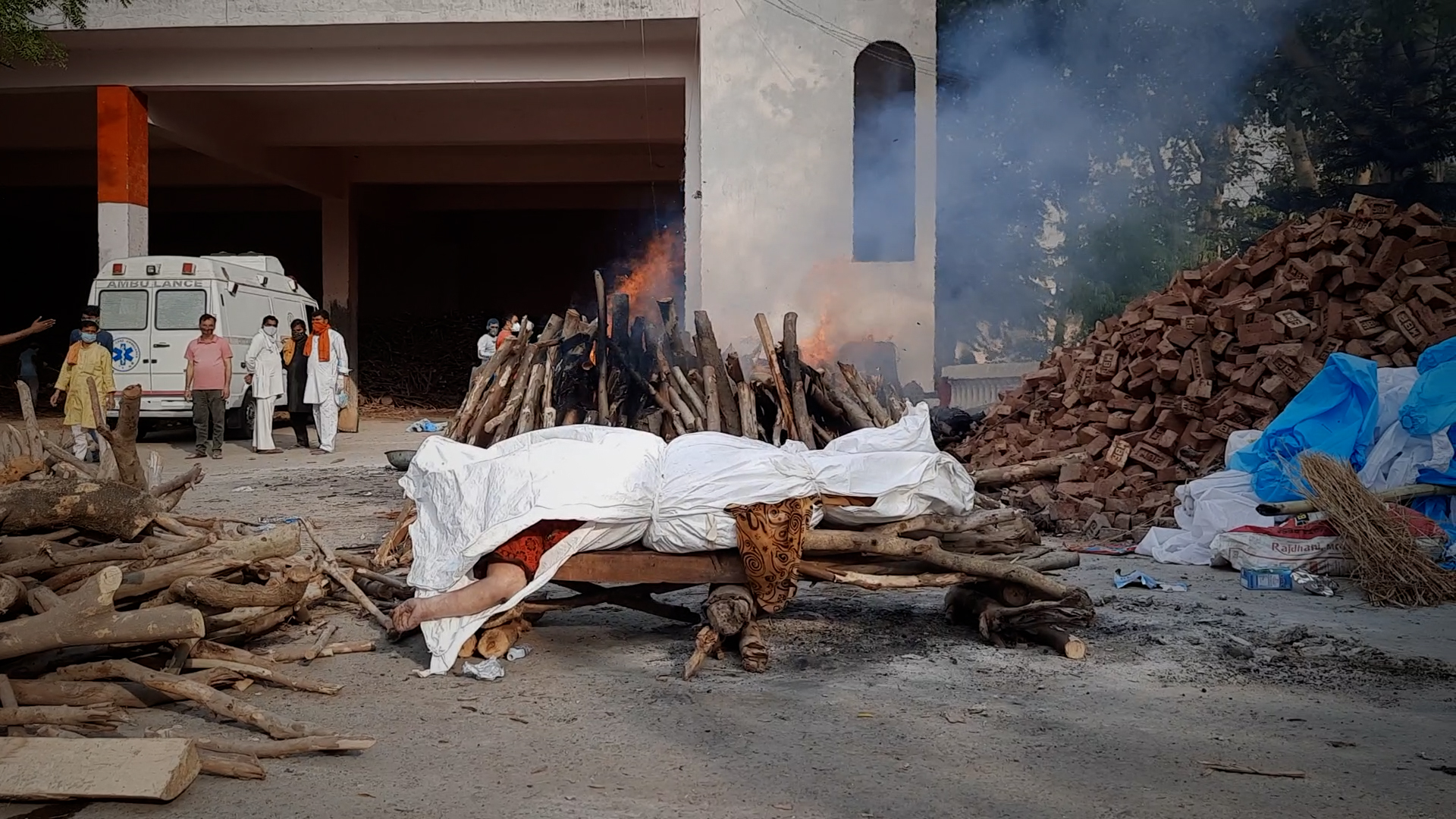 At Nigambodh Ghat, the largest and busiest cremation ground in Delhi, the dead bodies have been pouring in. The ghat authorities told us that they neither have enough space nor manpower to attend to the growing inflow of casualty. Our team also got in touch with men who were tasked with building more space so that more bodies could be burnt.

As the fire rages on – burning bodies – wood is gathered in truckloads at the cremation ground. We were told that let alone the last rites for the dead, there is not even enough wood to burn the bodies. We also saw ambulances flooding the ghat with dead bodies piled one on top of the other. There were no family members or farewell for these men and women who lost their battle to the deadly virus. 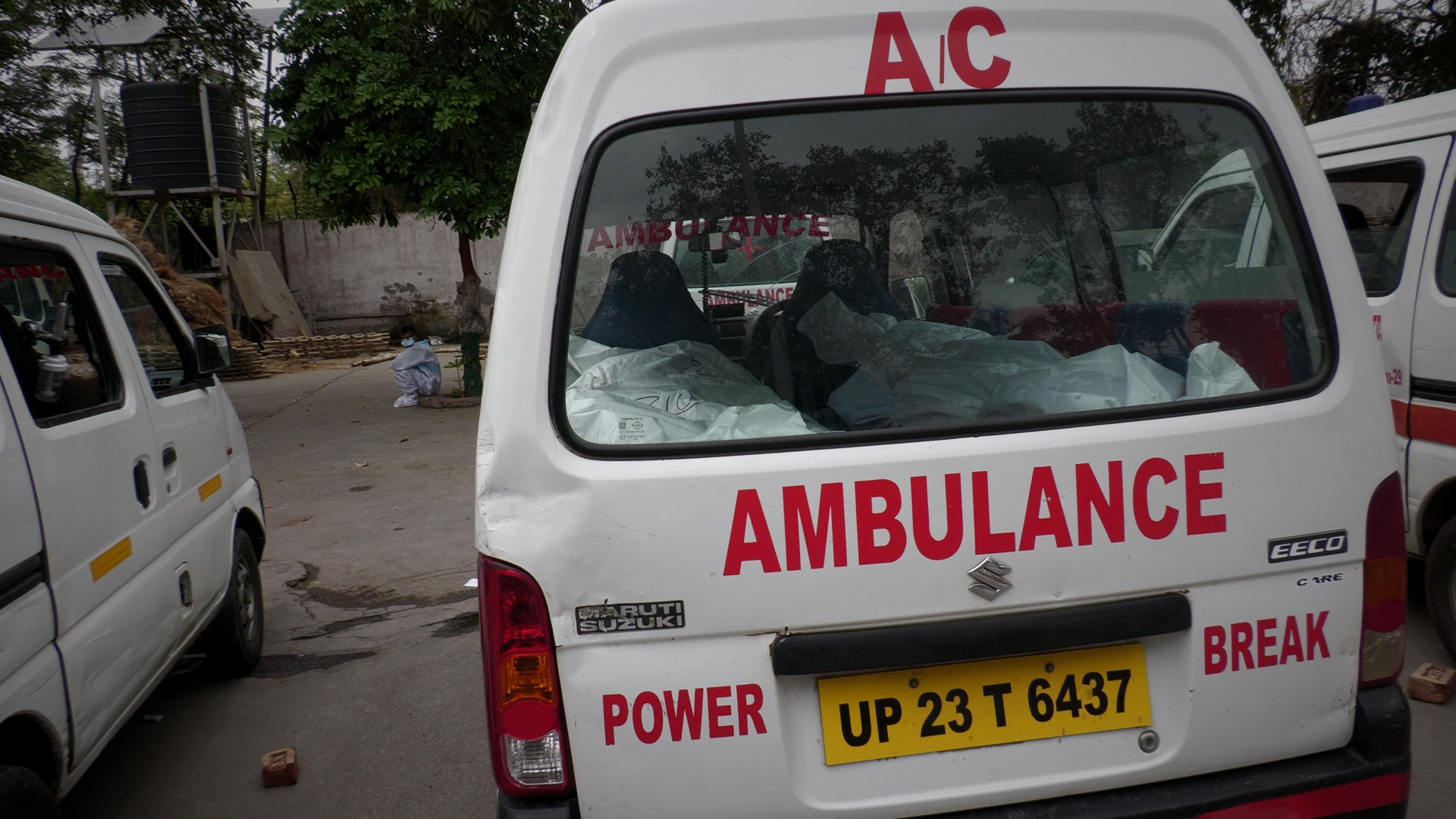 We also saw a dead man whose face was protruding out of a torn body bag inside an ambulance. The 53-year-old man had died of Covid out of a sudden cardiac arrest. With no family members by his side, his body was simply piled alongside two more dead bodies in an ambulance. 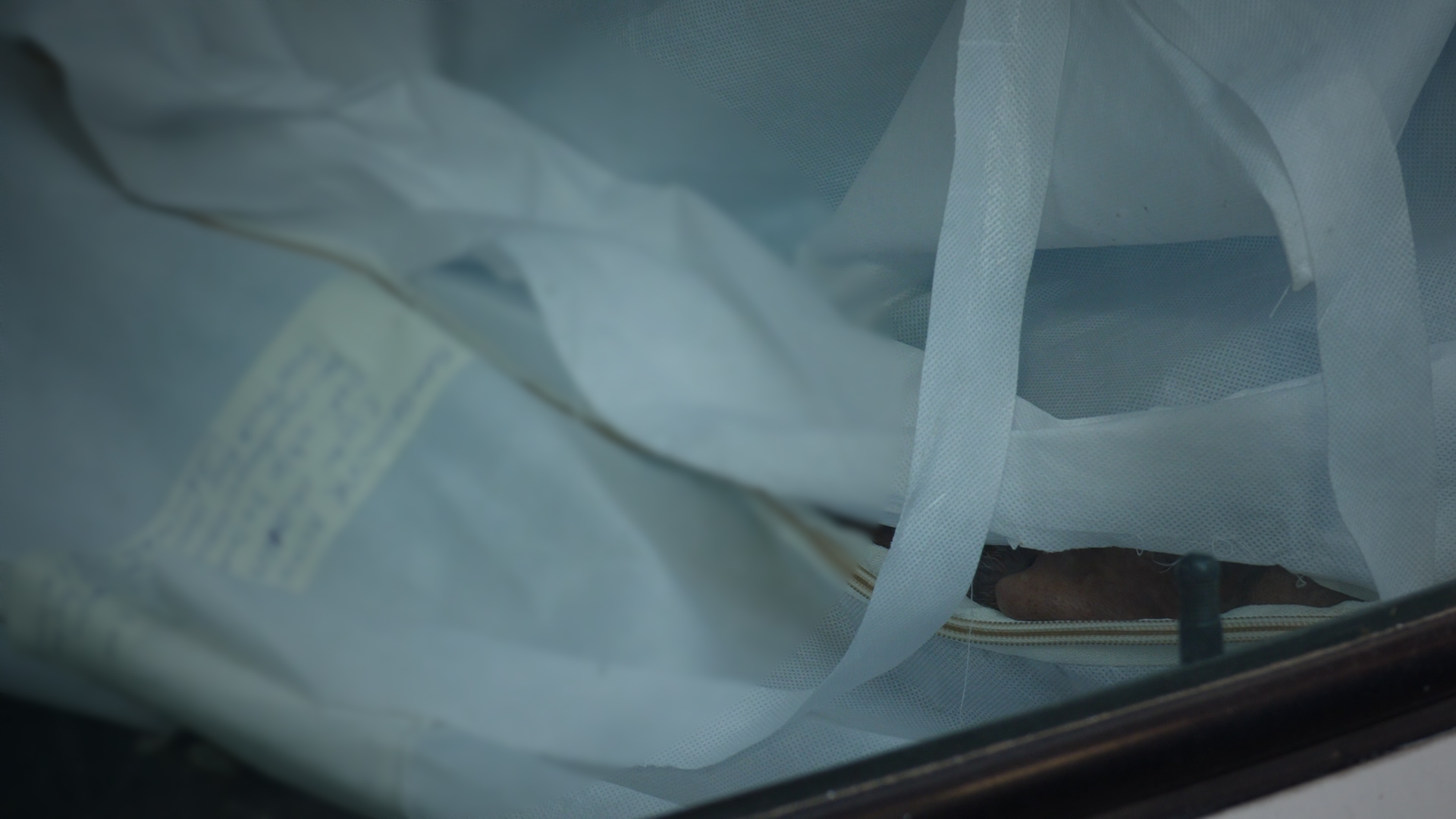 Most of these people had died gasping for breath. Some out of need for oxygen. Others were in dire need for ventilators. Some others just wanted a hospital bed and caring hands and most died of apathy from the system.

The virus doesn’t discriminate between religions. It doesn’t distinguish between the rich and the poor but the pandemic has made the divide between the haves and the have-nots more apparent.

“The poor don’t have money. What can they do? If a celebrity gets Covid, he will recover early but when the poor man gets Covid, he gets packed to the crematorium on the third day itself. There is medicine only for a celebrity. For the poor, there are only last rites. The poor people are left with just a coffin or a bundle of wood,” said Shonu Sharma, a cremator at Nigambodh Ghat.

People like Shonu are at the frontlines in the battle against Covid. Overworked and underpaid, they are drained and fatigued. “We don’t get to meet our family. We eat food from outside and then from there itself, we go back to the office. We don’t get to go home or meet our family members,” said Mahesh Kumar, an ambulance driver who works round the clock ferrying dead bodies to the ghat. 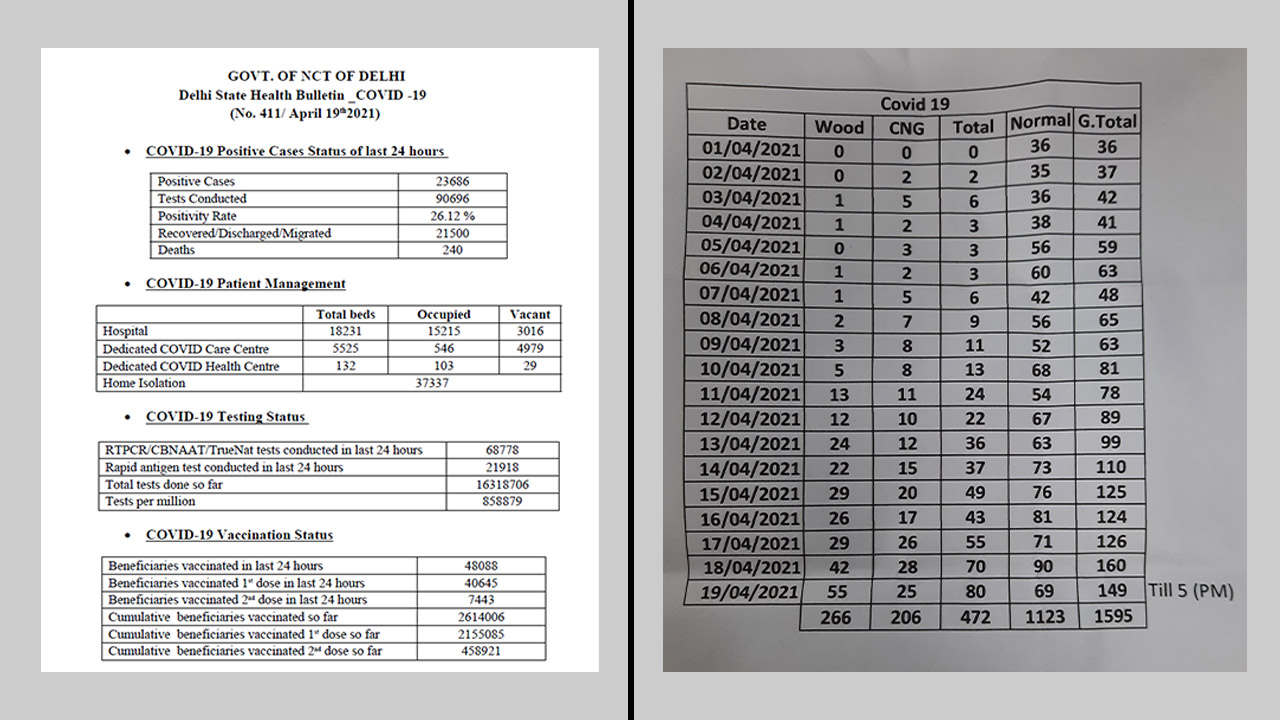 While the workers are pushing their limits, families and friends of victims are mourning their loved ones. Sangeetha Jain was one such victim who died on the 19th of April at the GTB hospital in Delhi. “Yesterday at 3.13 am, Mrs Sangeetha Jain passed away. We went to 5 cremation grounds with the body but none of them allowed us to do the last rites. Why did she die? Last night at 5 pm, the oxygen got over at GTB hospital and the oxygen cylinders were brought in only at 8.30 pm,” said Sunny Jain, the victim’s family friend.

“We have a whatsapp message from the patient where she was saying that the situation is critical here, please get me discharged but the hospital authorities refused to discharge her. There was not even a doctor to attend to the patient. We asked the hospital authorities to discharge her. They just left us in the lurch as if they just wanted her to die there. That’s exactly what happened. At 3 a.m, she died,” Sunny added.

Even as oxygen supplies are running out in hospitals across the country, in Delhi even the death counts don’t add up. We took a look at the numbers provided by the Delhi Government on the 19th of April. As per their records, 240 deaths were reported due to Covid but in Nigambodh Ghat alone – we were told by the ghat authorities – 149 bodies were burnt until 5 p.m that day. 80 of those were recorded on paper as Covid deaths. “Yesterday, in GTB hospital itself more than 400 deaths had taken place. The Kejriwal government is lying and mis-reporting the figures,” said Sunny.

“We went to 4 to 5 hospitals. We pleaded with the hospital authorities to treat our relative who needed emergency medical attention but our pleas fell on deaf ears. They refused to treat her. I personally called up all the numbers listed on the official app of the Delhi government. They refused to attend to the patient. One place asked us to wait for one or two hours. We waited for almost five hours. Still we couldn’t get a bed and she finally succumbed to Covid,” said Vinod, another distressed relative. 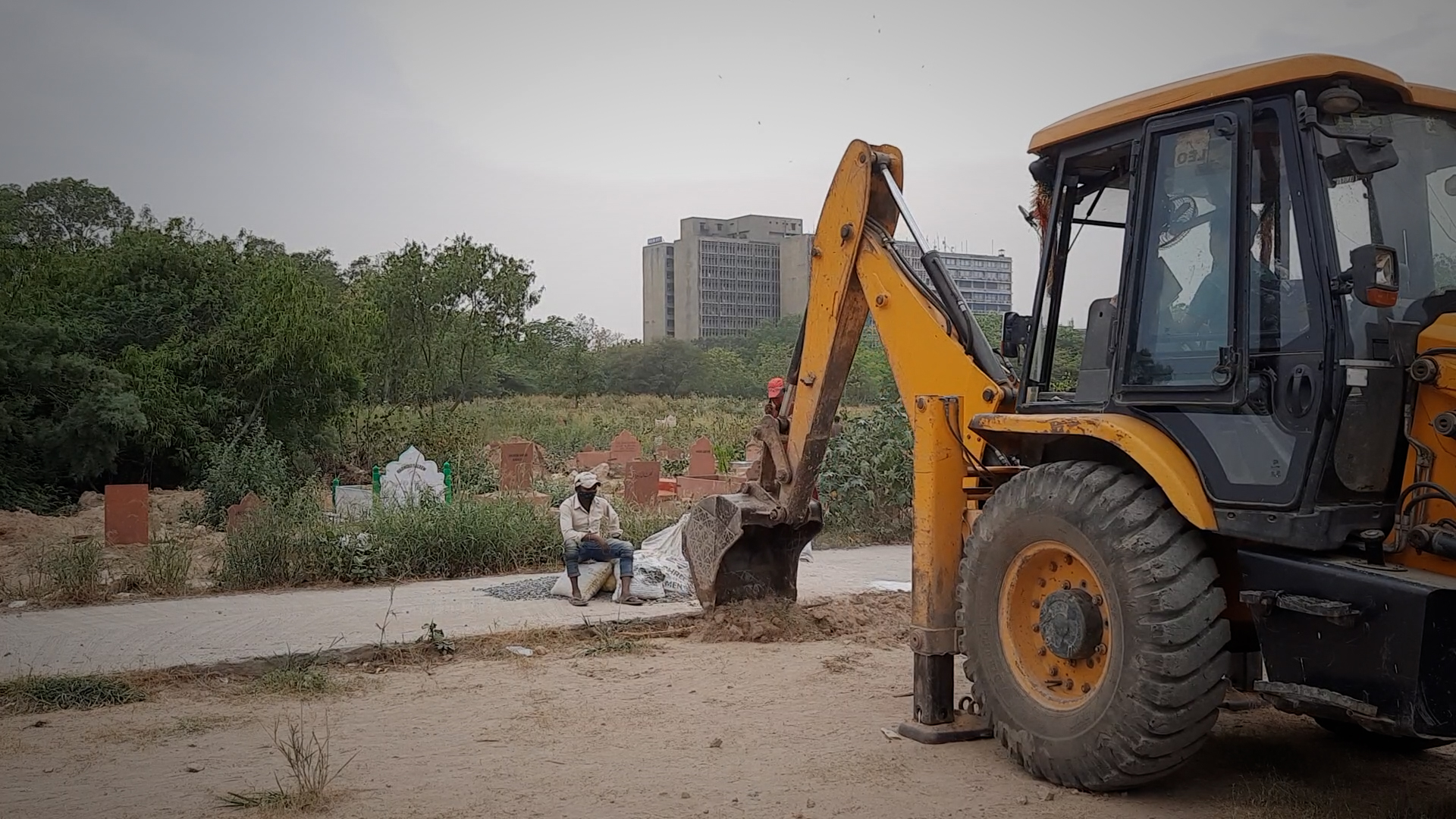 In many graveyards in Delhi, JCBs have been called in to dig more graves. “A Covid block was given to us during April last year. Since then, over 1000 dead bodies have been buried here. Now, the second wave has started. The new dead bodies are also being buried in the same place. We are facing a shortage of land because of this,” said  Mohamad Shameem, the in-charge at Ahle Islam Qabristan in Delhi.

In other places, as bodies flood in, people are running out of space to cremate them. In the Ghazipur Shamshan Ghat, we found dead bodies being burnt in the parking lot. “Commissioner Saab and MHO saab had inspected the place. DHO Saab told us that when Covid bodies come, you must cremate them immediately, be it on the ground or in the parking lot. Parking lots can be constructed again. How can we give a decent farewell to the dead when we don’t have enough land?” said Sunil Sharma, the in-charge at Ghazipur Shamshan Ghat.

While the fire burns more bodies and the graves bury more dead, people across the country are mourning the loss of their near and dear ones. As the never ending stream of bodies flood crematoriums, the chimney smoke fills the skies. It almost looks like the sky is also in mourning.

If you like this story and if you appreciate our Ad-Free Independent Journalism platform, show us your support by becoming our Member. Our Journalism can only sustain itself and survive if well-meaning people like you pay for news. Click here to become our Member.
TagsCovidDelhiHealthcarePandemicPublic health
Related articles More from author More from category
PrevNext