Why are Delhi nurses protesting and how is the government putting public health at risk by not heeding the legitimate demands of the nursing community?
Podumentary 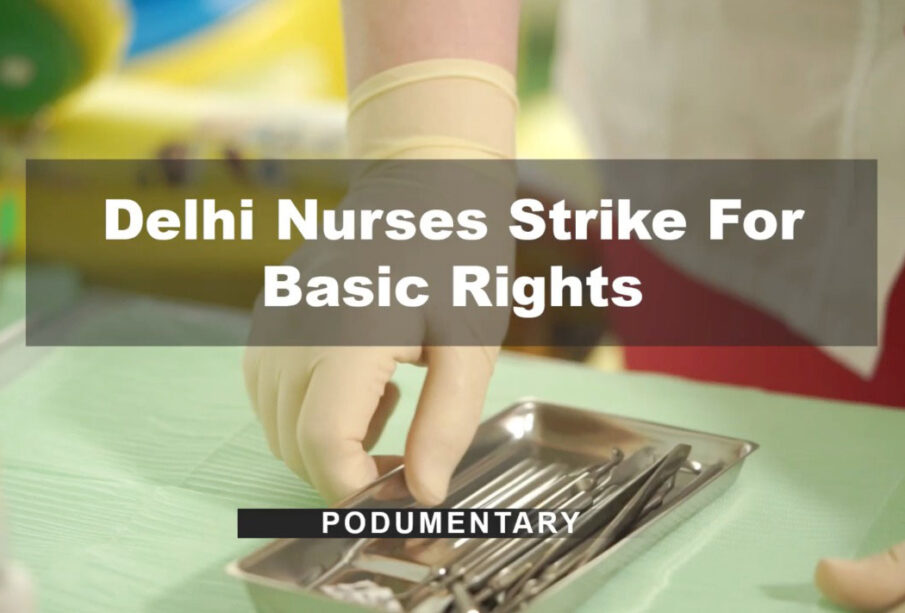 Delhi Nurses Federation (DNF), a conglomeration of thousands of nurses, have decided to intensify their protests. The federation has stated that they have repeatedly written to the Delhi government to redress their grievances, but their pleas have fallen on deaf ears. Why are the nurses protesting, and how is the government putting public health at risk by not heeding the legitimate demands of the nursing community? Hear this Podumentary out!

Produced below are the abridged version of the transcripts of our Podumentary (audio documentary) titled: Delhi Nurses Strike For Basic Rights

Delhi Nurses Federation (DNF), a conglomeration of thousands of nurses, have decided to intensify their protests. The federation has stated that they have repeatedly written to the Delhi government to redress their grievances, but their pleas have fallen on deaf ears. Why are the nurses protesting, and how is the government putting public health at risk by not heeding the legitimate demands of the nursing community?

Liladhar Ramchandani, Secretary General of the Delhi Nurses Federation, says that the nurses are helpless and are failing the patients. “I have been in this nursing profession since 1995 and have led the GB Pant nurses association for grievances from the past three governments. I realise we can no longer do anything for the public or ourselves. The protest that we carried out on October 18 at Delhi Secretariat, or the symbolic non-cooperation movement that we conducted on November 2, 3, and 4, is majorly due to the ignorance of the Delhi government and the Delhi Health and Family Welfare Department. I have never witnessed such a time, where even after writing to the Health Secretary, Chief Minister, Health Minister, and Chief Secretary about employee grievances, they are not even scheduling a meeting with us.”

The Nurses have been demanding the government increase the manpower in hospitals so that the nurse-patient ratio can be maintained. Their other demands include the regularisation of services and implementing long overdue promotions. According to Anita Mathew, Senior Nursing Staff at GB Pant Hospital, the future of contractual nurses who have put in nearly 17 years of service is hanging in the balance.

“Firstly, the promotion of the nurses, which is pending, must be fulfilled. Secondly, contractual nurses who have worked for the past 17 years have few opportunities because they have crossed the age limit. Their future is uncertain, and they do not know when they will be laid off. New hospitals are being set up, but there is a crunch in manpower, as there are no new recruits to ensure the proper functioning of these hospitals. Nurses are being transferred from one hospital to another. The government claims that the health sector is improving, but that is not the reality. There is no use of new buildings and equipment without sufficient manpower. Imagine one nurse taking care of 10-15 patients. In GB Pant Hospital, there are 42 patients in one ward, and then you have OPD patients too. If there are only two staff to take care of the entire ward, then to give medicine around 6 p.m, the nurse has to start the rounds from 1 p.m itself.”

Amit Pandey, General Secretary of Lok Nayak Hospital Nurses Union, says that even nursing students who were recruited during Covid-19 to work at the temporary medical facility at the Ram Leela Ground today have nowhere to go. The nurses are also accusing the government of opening three new hospitals and transferring the nursing staff and other healthcare staff from existing hospitals instead of recruiting new ones.

“They inducted a few nursing students during the Covid19 pandemic who worked at the temporary medical facility at the Ram Leela Ground. These students worked at the most crucial time, on daily wages of around 2000 rupees per day. If they took a leave, their salary would be deducted. So the future of these approximately 200 students, who work here at our hospital, has yet to be determined. The government recently started three hospitals. One is Indira Gandhi Hospital in Dwarka, another is Burari Hospital, and then there is one more. So in these hospitals, the government has transferred the nurses from various Delhi government hospitals instead of recruiting new staff. Now, this resulted in a shortage of nurses in our hospital. The directory reflects these nurses work in our hospital, but in reality, they are working at hospitals like the Indira Gandhi Hospital or Burari Hospital. Therefore, the problem of shortage is not reflected, and the burden we face goes unnoticed,” says Pandey.

The tussle between the Delhi Nurses Federation and the Delhi Health Department has been going on for some time now. Punam, Nursing Officer at the Sanjay Gandhi Hospital, says that many nurses lost their lives caring for patients during the thick of the pandemic, yet the government is not meeting the basic needs of the nursing community.

“During Covid times, we didn’t get a single day’s leave. All our weekly offs and casual leaves were suspended. Without worrying about our lives, all the nursing staff stood together to care for the patients. Many of our nursing staff were martyred during the pandemic. We continued our duties, compromising our family’s well-being. Our family members were also affected because of us. Most of the time, the family members of patients would leave them unattended to us. Only the nursing staff cared for the patients day in and day out.”

The nurses claim they are constantly being shifted from one hospital to the other. They allege that the workload has already taken a toll on their physical and mental health. That apart, hospitals in the national capital are not maintaining the patient-nurse ratio, which directly affects the quality of healthcare.

“The authorities feel that the departments are functioning despite the scarcity of staff, but the departments are actually not functioning. This is just an adjustment. In a general ward, the ratio of patients to nurses is 5:1 for the safety of patients. The ideal ratio of nurses to patients in critical care is 1:1. But the ratio is never maintained. Considering these factors, we are demanding the government create new posts. How can we find a resolution if the government does not wake up and is not made aware of our issues? If our small-scale protests don’t work, then we will resort to an indefinite strike from November 30,” asserts Punam.

The nurses reveal that such is the pathetic condition of Delhi hospitals that, at times, more than one patient occupies a bed. Devendra Kumar Jain, General Secretary of GB Pant Hospital, says that it is a hard choice to make when you have to prioritise caring for patients, even in an emergency ward.

“After studying data from Delhi’s ten hospitals, we found that a total of 5,400 beds are sanctioned, whereas the functional beds, which is the increased strength, is 6,700. This is approximately 1300 more beds and this was done by adjusting the nursing staff. So, in ten hospitals, the nurses assigned for 5400 beds are working for a total of 6700 beds. The rules of recruitment have also not been reviewed. The nurses of the Delhi government are working based on the recruitment rules of 1960. It is very important to review these rules, which have not been done. The central government has already reviewed it. In an emergency, which patient is treated first? The one who needs treatment the most. We have to prioritise patients even in an emergency situation. Such is our state of affairs,” rues Jain.