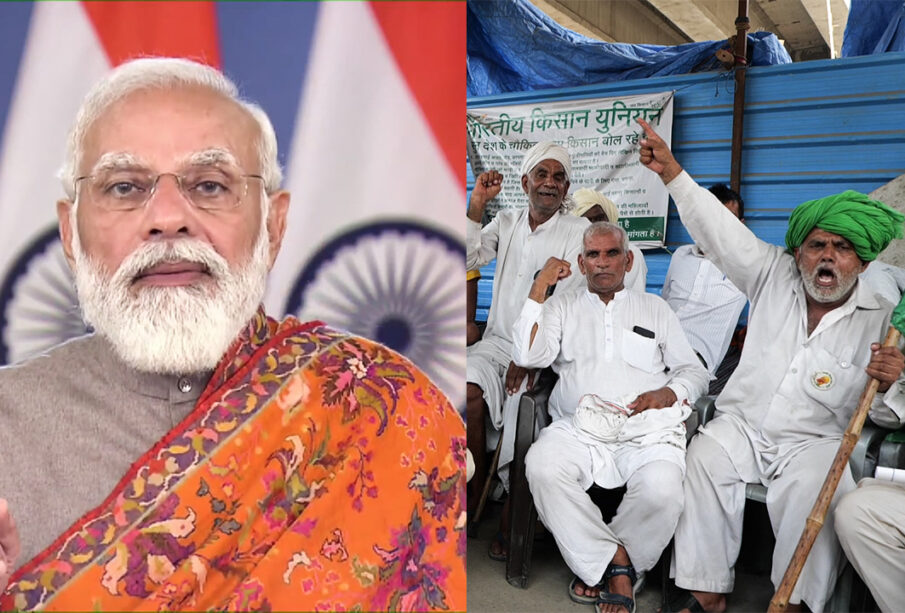 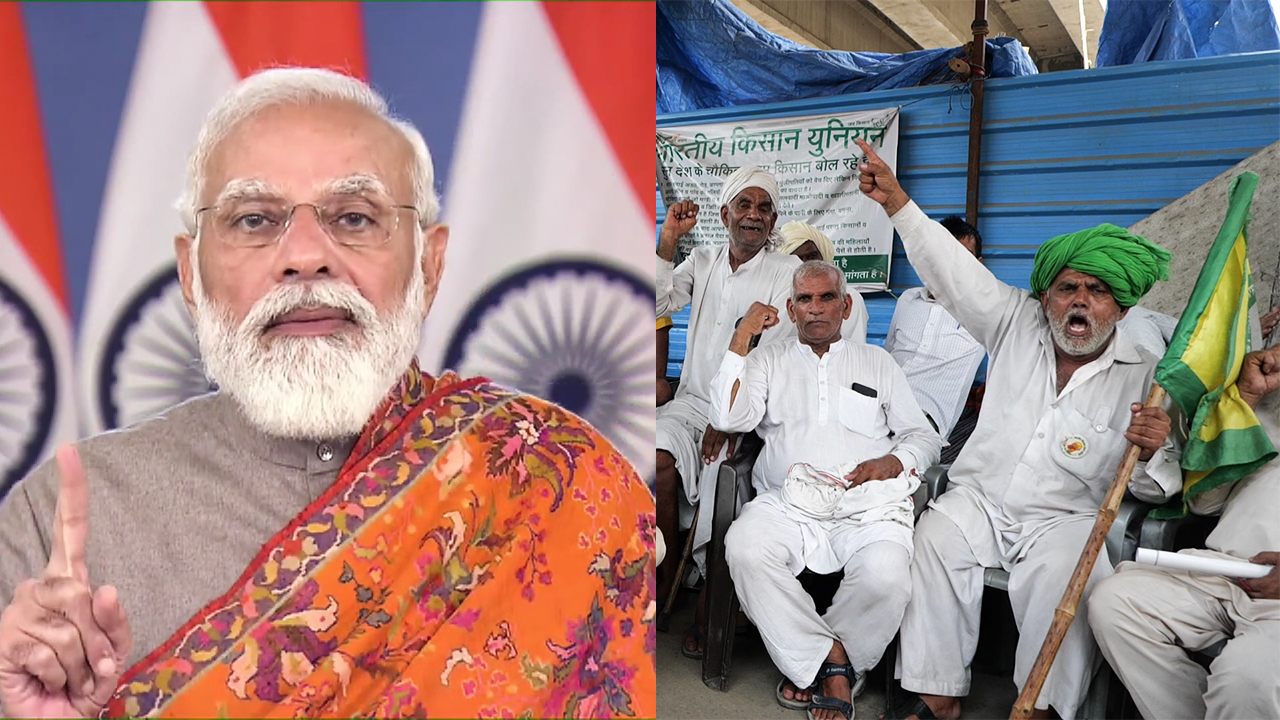 In a surprise move, Prime Minister Narendra Modi today addressed the nation and announced that the three contentious farm laws will be repealed in the upcoming session of the parliament. The three controversial farm laws had resulted in protests by farmers across the country for over a year.

After the BJP led NDA drew a lot of flak for passing the three farm laws without consultations with major stakeholders, the Prime Minister chose to minimise the damage by deciding to make the announcement on Friday, during Guru Nanak Jayanthi, the birth anniversary of the first Sikh guru. The declaration by the PM also comes just two days after the Centre announced the reopening of the Kartarpur Sahib Corridor, which is a visa-free border crossing and corridor connecting the Gurdwara Darbar Sahib in Pakistan to the border with India.

“With a true intention and a pure heart, I would like to apologise to the people of this country. Perhaps there were shortcomings in our attempts because of which we could not convince our farmer brothers about a truth that was as clear as the light that emits from a candle. Today is the sacred birth anniversary of Guru Nanakji and this is not the time to blame anyone. Therefore, today I come before you to declare that we have decided to repeal the three farm laws,” said the Prime Minister during his address to the nation.

Calling for a new beginning, PM Modi announced the repeal of the three laws and requested the farmers to call-off their protests and head back to their farms and villages. Terming the u-turn by the government as a big win for the farmers agitation, the farmers said that they will not withdraw their agitation immediately and would continue their protests till parliament rescinds the laws.

Addressing the media, Rakesh Tikait, the National Spokesperson of the Bhartiya Kisan Union (BKU) said: “The PM has said that he will repeal the three farm laws. But I want to ask the Prime Minister to first get it repealed from the Parliament soon. The farmers will not go back to their homes without this assurance. The government has to also guarantee us MSP. The question of MSP is the question that concerns the farmers of this country. There is no need for people to get excited and distribute sweets. This agitation will continue. A nine-member team of Samyukt Kisan Morcha will meet today at the Singhu border at our head office and make the final decision.”

The farmers agitation has been one of the largest agitations in the world which has been going on for over a year now with farmers from Punjab and Western Uttar Pradesh leading the protests and the rest of the farming community supporting them from across the country.

Here’s a deep dive into the farm laws and the ensuing controversy. We have attempted to answer some key questions regarding the farmers agitation and the three controversial farm laws:

1. What are the three farm laws passed by the Parliament?

In September 2020, the Parliament passed the three farm laws: 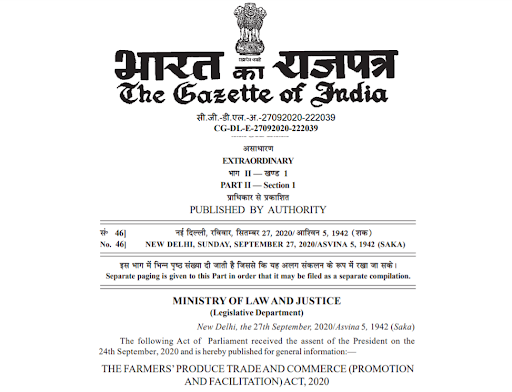 2. What do these laws mean? 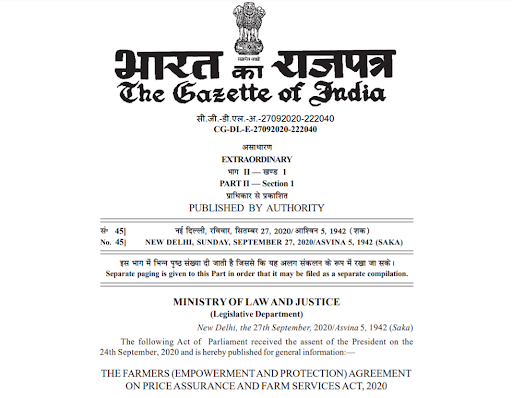 3. What are the farmers’ fears?

The protesting farmers have been saying that the laws enacted will dismount the Minimum Support Price system. They claim that over a period of time, big corporate houses will dictate the terms of the agreement and pricing for the produce. The farmers have claimed that the dismantling of the mandi system will prove to be suicidal for the farmers and especially the commission agents who help the farmers with loans. 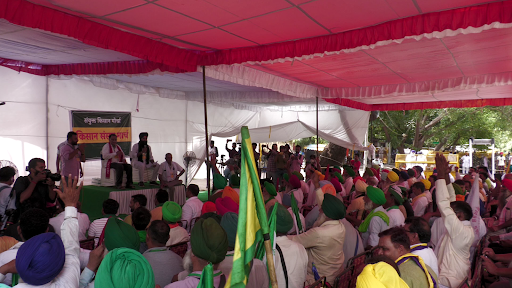 The farmers therefore have been demanding the withdrawal of the three farm laws. They want the government to assure them that the MSP system will continue. They also want the government to withdraw the Electricity (Amendment) Bill as they fear that they will stop getting subsidised electricity. The farmers have also been demanding the slashing of diesel prices for agricultural use.

4. What did the government say in response to the farmers’ allegations?

The government has continued to maintain that the farm laws are not against the interest of the farmers. The Prime Minister had defended the Farm Laws in the parliament by saying that its provisions were optional and not compulsory and it gave the farmers a better option to take a decision on where to sell their produce.

The government has stated that the farm laws are intended to support small and marginal farmers. The contract farming law, according to the government, helps farmers to get into a contract with large retailers and agri-firm owners on pre-agreed conditions for their produce. The government, while defending the farm laws, has said that these are major reforms in the agriculture sector that are designed to remove middlemen and commission agents so that farmers can get the complete benefit of their produce.

5. Why did the government take the decision to repeal the farm laws now?

It is widely believed that the road to Delhi passes through Lucknow. UP has given India 9 of its 15 Prime Ministers. With a population of over 23 crores, UP sends the most number of Members of Parliaments both to the Loksabha and the Rajyasabha, which is why UP elections are extremely important for any political party.

India is an agrarian economy and Uttar Pradesh is an agrarian state that is the largest producer of wheat. The farmers in UP and Punjab who also form a sizable vote bank have a say, therefore, in the country’s political narrative.

The impending UP and Punjab elections and the farmers’ agitation which has gone on to become one of the world’s longstanding agitations have come as a major setback for the Modi government, which is trying its best to make a mark in the electoral politics of both these states. The calculated decision of the Prime Minister therefore is a political move aimed at appeasing the farmers who had threatened to boycott the BJP in the impending elections.

6. Did the government consult stakeholders before passing the laws?

7. How many people died in the farmers agitation?

There have been several conflicting reports in the media regarding the exact numbers of deaths of farmers during the year-long agitation. The Samyukt Kisan Morcha has stated that nearly 700 farmers have died in the protests. Rakesh Tikait, the National Spokesperson of the Bhartiya Kisan Union has maintained that over 750 farmers have died during the protests. The Delhi government has maintained that more than 700 farmers were martyred during the agitation.

However, the Modi government has continued to assert that they have no records of farmers who have died during the protests. It is rather surprising that even when the government admits that the farmers are the backbone of the country, their deaths are not even recorded in the books of the administration.

The families of the farmers have been requesting the government for justice and compensation. Yet, the government has gotten away feigning ignorance related to the numbers of the dead and some politicians within the ruling establishment have also called the protesting farmers as ‘khalistani elements’, ‘jihadis’, ‘tukde-tukde gang members’ and some even have called the protestors ‘terrorists’.

8. How will the farm laws be repealed?

The 25 day-long winter session of the parliament is scheduled to begin on November 29. The Prime Minister in his address to the nation said that the three farm laws will be repealed during the upcoming parliament session. There are two ways by which a law can be repealed by the government. First, by way of bringing a bill to repeal the three laws. Second, by way of promulgating an ordinance that must be followed by a replacement bill within a period of six months.