On May 4 2020, 17-year-old Manav Singh committed suicide by jumping off from the 11th floor balcony of his Gurugram apartment. Due to the impact of the fall, Manav’s skull got smashed, parts of his brain spluttered out and he died on the spot. Speaking to The Probe, Manav’s parents alleged that their son was trolled and cyber murdered “I saw Manav’s head split open like a watermelon and I saw my son die on the spot. This is not a simple case of suicide. This is cyber murder”.

Manav’s parents claimed that their son was very cheerful on the day he died. His parents vividly remember that Manav had ordered burgers for dinner that night and the family dined together just a few hours before his death. “He happily went off to his room after having dinner. At 10.45 that night, he went through his instagram account read some shocking comments that was posted by a few minor girls against him. They were trolling him. We left our kid smiling that night. I don’t know what happened in those 45 minutes that he had to take this extreme step,” Tanuja Singh, Manav’s mother said.

After reading the defamatory posts against him, at 11.23 that night, Manav sent a message to his parents bidding them farewell. His parents alleged that Manav committed suicide within 7 minutes of sending them the WhatsApp message.

Why are parents alleging cyber murder

The Probe has accessed electronic evidence in the case that shows that a defamatory post was sent against Manav on Instagram and he was trolled by a few minor girls on the night he died. “Between 10.45 pm to 11.30 pm that night, there were about 20 to 30 people who were jumping on to Manav on the internet like wolves. They were continuously calling and messaging him. He was being trolled at a breakneck speed,” Manav’s father explained.

According to the parents, the defamatory post was in violation of Section 67 of the Information Technology Act, 2000. Following the defamatory posts, one of the alleged perpetrators also sent another message asking people to “delete stories which have been shared”. The victims parents alleged that this was a violation of Section 204 of the IPC that deals with destruction of evidence. “All these violations together invoke Section 306 of the IPC which is abetment to suicide,” the victim’s father added.

Police inaction in the case

The family of the victim have alleged inaction from the Gurugram police. They have criticised the Gurugram police for taking 10 days to file the FIR in the case. “The chargesheet was filed against unknown persons without invoking Section 67 of the IT Act. When we went to the police as victims, we were being treated as accused. We have completely lost hope, but we will not give up our fight for justice for Manav,” Manav’s father said.

Speaking to The Probe, Aman Yadav, ACP, Gurugram Police said “I am heading this SIT from the very initial stage. I have already issued directions to my team. We have framed some questions and highlighted some key points which needs to be investigated”. The Probe also tried to approach the minor girls and their family members for a response but they were unavailable for comment. 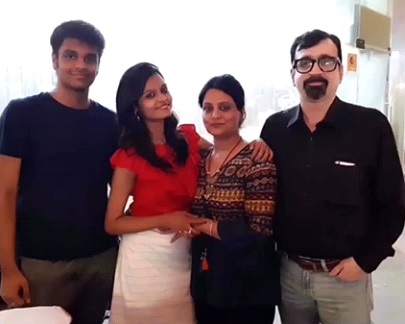 Manav Singh with his family | by special arrangement

Many cyber experts we spoke to have said that Manav’s case is a clear cut case of cyber bullying and the outcome of this case completely depends on the will of the law enforcement agencies. “A lot of focus will have to depend on how quickly the law enforcement agencies are able to collect, collate and preserve relevant incriminating electronic evidence in the case,” Pavan Duggal, cyber law expert asserted.

If you like this story and if you appreciate our Ad-Free Independent Journalism platform, show us your support by becoming our Member. Our Journalism can only sustain itself and survive if well-meaning people like you pay for news. Click here to become our Member.
TagsCyber bullyingGurugramIndian JudiciaryIT ActManav SinghSection 67Suicide
Related articles More from author More from category
PrevNext