How sound is the Indian economy?

How sound is the Indian economy? The Probe Podumentary

Recently, India overtook the United Kingdom to become the fifth largest economy in the world but how sound is the Indian economy really? Here’s the latest episode of our Podumentary!
Podumentary 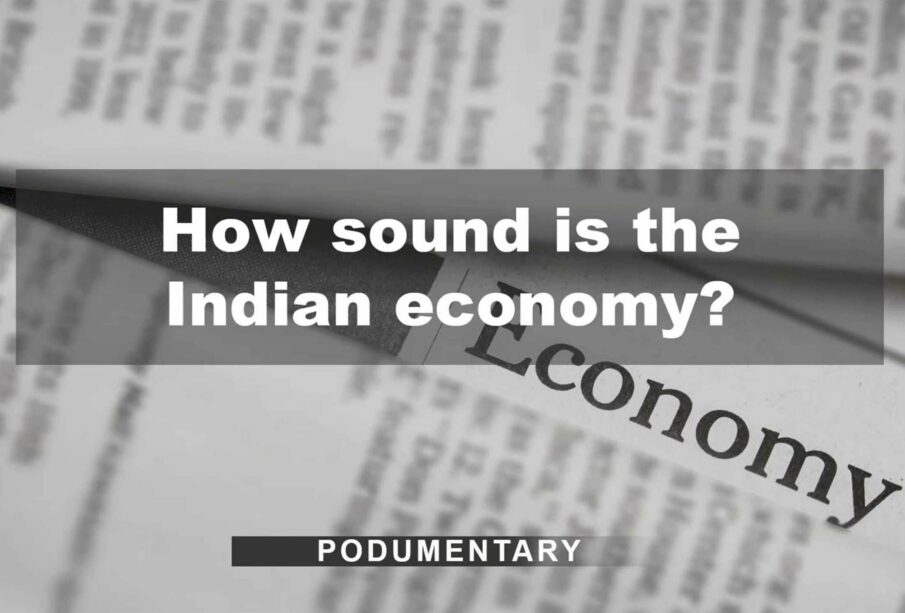 Recently, it was reported that India overtook the United Kingdom to become the fifth largest economy in the world. The IMF projections placed India in the fifth position after the US, China, Japan and Germany. The premise of India overtaking the UK was based on the calculations of Bloomberg, which had used the IMF database for its study. Should India rejoice at this milestone, or should we exercise caution and not be complacent?

Produced below are the abridged version of the transcripts of our Podumentary (audio documentary) titled: How sound is the Indian economy?

Our Podumentary is a series of audio documentaries on topics and stories that matter to people and are part of our public interest journalism in India. Here is a new episode of our Podumentary titled: How sound is the Indian economy?

Recently, it was reported that India overtook the United Kingdom to become the fifth largest economy in the world. The IMF projections placed India in the fifth position after the US, China, Japan and Germany. The premise of India overtaking the UK was based on the calculations of Bloomberg, which had used the IMF database for its study. Should India rejoice at this milestone, or should we exercise caution and not be complacent?

Speaking to The Probe, economist and former Deputy Chairman of the Planning Commission of India, Montek Singh Ahluwalia, says India has a long way to go. “It is good that we have overtaken Britain to become the fifth largest economy, but remember, this doesn’t mean we are as rich as Britain because we have a huge population. Our per capita income is much lower than Britain’s. Britain is growing at about two per cent per year and depending on which numbers you use and which period, I mean in India, the growth rate… if we want to be very optimistic, we would say, we will grow at 7 per cent. But I mean, nobody doubts that we will grow at 5 or 5 to 6 per cent. So, even the lowest growth rate for India would almost certainly have made India overtake Britain. So, it is not a surprise to me, but it’s good that this has happened. We have a long way to go because we are still at the bottom of the middle-income countries.”

India’s population is twenty times higher than that of the UK, because of which its per capita GDP is low. However, a decade ago, India was ranked 11th amongst the large economies. Dr Charan Singh, economist and the CEO of the EGROW foundation, says today, India has reached a key milestone, and we have much to rejoice about.

“India’s growth trajectory is very impressive. We are the fastest growing economy in the world. We are on a very solid footing. We have the richest demographic dividend. Our regulator, the Reserve bank of India, SEBI and the insurance regulator is exceedingly robust, solid and doing a very good job. By 2027 we will be overtaking the Brits by leaps and bounds. We know that India’s per capita income will not compare with the per capita income of the UK. The way the Brits left India in 1947, we were amongst the world’s poorest countries. About 90% of the people were below the poverty line. Literacy rate and our traditional Indian education had been totally tarnished, and the British education system had been imposed on us.”

The slow growth of the manufacturing sector and India’s imports being higher than the exports have long been a significant concern for the government. Human Development Economist Santosh Mehrotra says when compared to the G20 or G7 countries, India’s standing is low. India must not be complacent but cautious.

“India’s GDP has exceeded that of the UK, but in many ways, it’s a pretty meaningless statement for the following reasons: the UK has a per capita income which is probably twenty times ours. If India has the second largest population in the world, then should it not have the highest or the second highest GDP in the world, and it’s nowhere close to that. And in fact, if you compare India with any of the G20 or G7 countries, we are the poorest, and the only reason we have exceeded the UK is because we are growing fast and we are a large economy.”

When the talk of India’s standing in the world crops up, some economists ask what has really improved and for whom? On the Human Development Index, India has slipped two places and today ranks 132 out of 191 countries. According to Anitha Rangan, an economist with Equirus, one of the most significant problems plaguing the Indian economy is the quantum of projects stuck due to bureaucratic hurdles.

“We are certainly in the lower ranks as we look at the per capita numbers because we are in the triple-digit space when it comes to per capita. So, that indicates that GDP is a measure of size and given a large population of ours, we are still among the lower ranks in terms of per capita, and there’s a lot of room therefore for improvement, and if you look at even China, they are four times more than our per capita income. The US is probably thirty times more. The first and the longest thing plaguing the Indian economy is infrastructure, and the quantum of stuck projects. It’s the pace of execution that we need to improve. Today, we are in a situation where our sanctioning processes have become far more smoother, transparent, and so on, but where we are lagging is the pace of execution because projects start and they get stuck, and they get stuck for a long period of time before they are released.”

India is one of the fastest-growing major economies in the world. But will the rising interest costs and the looming fear of recession in major economies play spoilsport for India? Economist and political strategist Mohan Guruswamy admits India needs to revisit its tax decision.

“When you study government, the real index of a government’s power is its tax GDP ratio. India, at this rate of per capita income, has a tax GDP ratio of about fourteen per cent. China has double that. Even a country like Russia has about forty per cent. Britain has thirty-nine per cent. America has thirty-four per cent. That means unless your incomes are high, the government can’t collect taxes. Even if you have a large GDP, if your tax base is low, then the government is not rich or powerful. The higher the tax GDP ratio, the better for you. But given that India is not doing too well, even the United States has a higher tax rate than we do.”

Guruswamy says the decision of the government to go for tax reductions last year was not a sound one. “Last year, the government gave tax reductions to upper-income groups, saying that they will invest, which is all rubbish. Nobody invests unless the investment opportunities are there. You don’t invest because you have money in your pocket. You tend to invest abroad when you are assured of better returns. So, I think we need to collect more money and spend more money on infrastructure, people, agriculture, schools and hospitals. It all contributes to growth. The capital expenditure to budget ratio is about nine per cent in India. That means for every hundred rupees the government spends mostly on itself, only nine rupees is spent on capital expenditure… which is to build something new.”

India’s uneven monsoon has already hit the agriculture sector. Today, India is faced with higher borrowing costs, our unemployment levels are rising, and high inflation has put a severe strain on the economy. According to Santosh Mehrotra, demonetisation and a hastily implemented GST policy slowed down the Indian economy.

“Our economy was growing at a much slower rate each year after the demonetisation began. So, the slowdown of the economy began just as soon as a completely illogical intervention called demonetisation was put in place and then a badly planned and hurriedly implemented GST came through. In 2019, the government raised the thresholds for personal income tax. The result was that about seventy-five per cent of those who were paying income tax fell out of the personal income tax net. As it is, we have too few people paying personal income tax. This is a ridiculous situation of a fiscal crisis that the government had put itself into already from 2019 onwards.”

India must revive its private investments, and inflation must be contained. Initiatives like Make in India and Startup India must be given a boost. India’s growth story will pick pace only if we put stronger and well-planned economic reforms in place.

According to Mehrotra, policy needs to focus on ensuring that investment revives. “Private investment needs to revive. The government needs to reduce inflation as quickly as possible. We know that some part of the inflation is imported because of the Ukraine war, but how do you explain the fact that we in 2014, used to produce about 22% of our oil needs? We now produce only 16% of our oil needs. So, we are even more dependent on imported oil. In an economy where joblessness has grown, and prices have been rising, you are compressing demand by actually keeping input prices like diesel prices high because that impacts every other commodity.”

Today, India is indeed in a much better position to tackle growth and inflation-related challenges. The Indian economy is undoubtedly showing resilience and recovery. Some say India might even become the third largest world economy by 2027, but India cannot be complacent. It has miles to go before it leaps.