The Probe finds that people are disowning the dead bodies of their kith and kin. A shocking ground report from the national capital.
by Prema Sridevi
Covid-19Feature StoriesIndia
READ LISTEN WATCH

The rise in the number of Covid-19 cases in India has completely crippled our healthcare system. With the number of death cases rising by the hour, we decided to visit one of the cremation sites in East Delhi.

The pandemic has brought out the best in humanity and at times like this it has also brought out the worst in humans. In the cremation centre, we also found many strangers, good samaritans and volunteers from different ngos cremating unclaimed dead bodies. 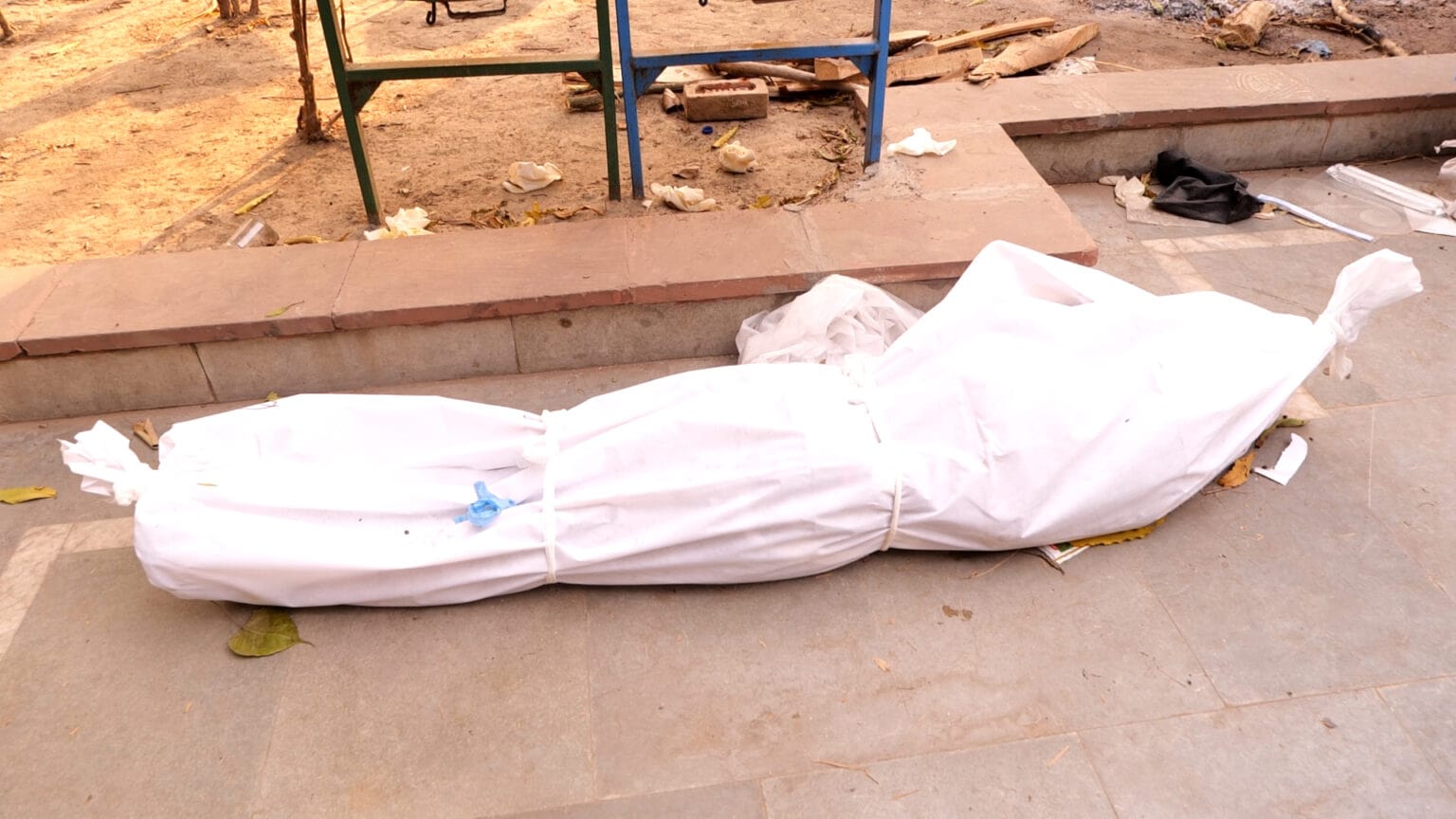 Jitender Singh Shunty who runs the Shaheed Bhagat Singh Sewa Dal pointed us to another dead body that was lying around in the cremation centre since last night. “Last night when most of our work was done, we found one body in the main gate. We asked everyone around about the dead body but there was no response. We called the police. The police found a slip on the dead body that said that the post mortem of the body was already done. The police asked us to cremate the body immediately. The cops said that they will try to find the whereabouts of the relatives of the dead person,” he said.

Jitender pointed us to another dead body, which was dumped by a relative in the morning. “I have seen so much during this Covid-time. Of children not touching the dead bodies of their fathers but while cremating without fail they remove the finger rings from the dead body. I have seen some children taking thumb impressions of their dead parents. I have seen too much during this pandemic. So much humiliation of the dead,” he added. 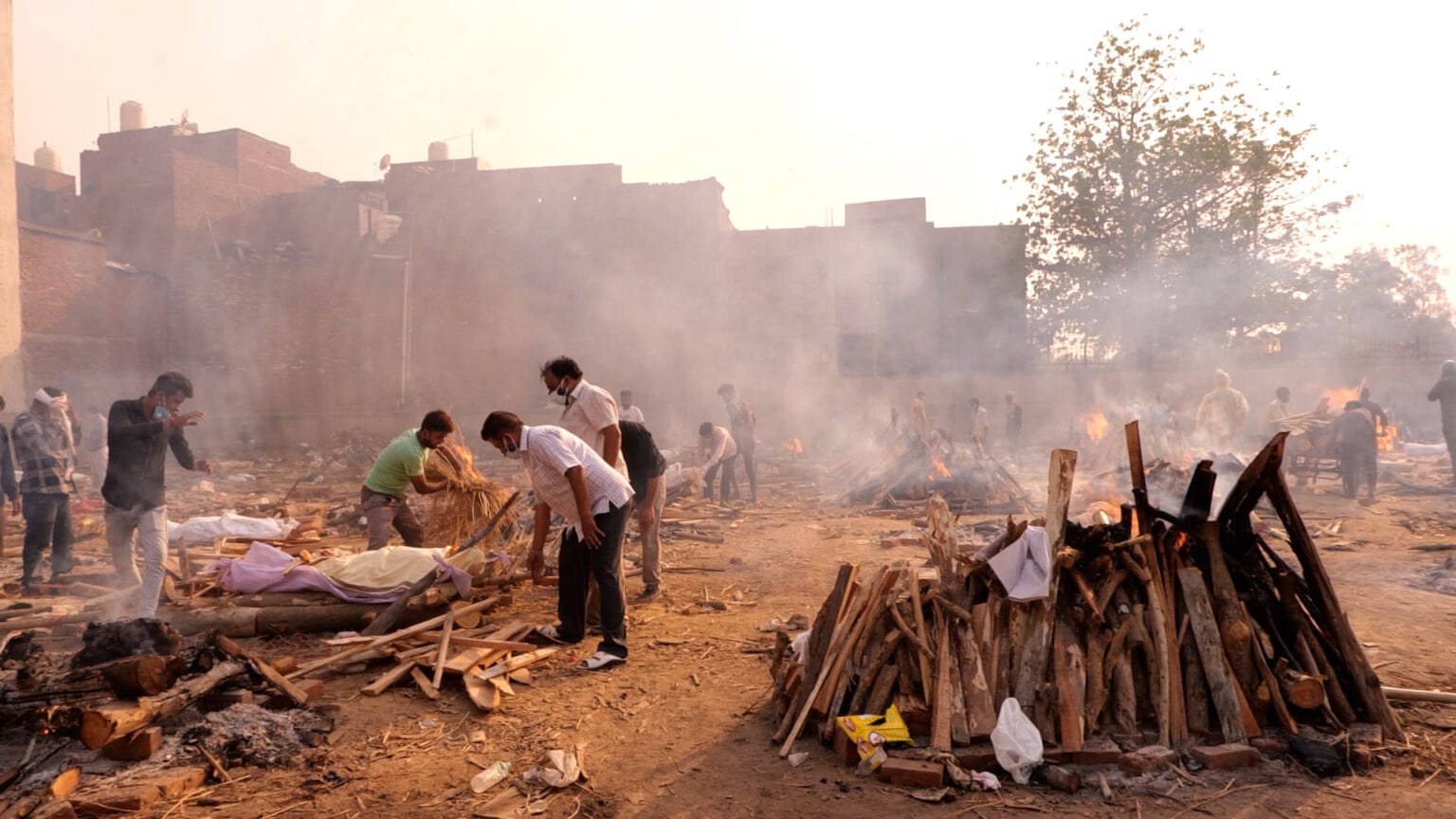 When we investigated further, we found that there have been numerous instances of relatives dumping dead bodies of their kith and kin and fleeing away. The duality of human nature can be seen in these cremation grounds. On one hand we found many family members wailing for their departed ones and on the other hand we found unclaimed, unattended dead bodies lying around for hours with immediate relatives nowhere in sight.

Jitender Singh Shunty on the other hand has been spearheading the cremations at the Old Seemapuri Cremation Ground. His driver had passed away due to Covid earlier. He told us that three more of his drivers and his manager are currently hospitalised but he and his team of volunteers have not stopped their work.

“A few days back a mother came to me and said that her husband had died out of Covid, 20 days ago and that her son has now died. People are dying before their time because they are not getting treatment. This is happening in a national capital like Delhi. I recently saw a 22-year-old sister who was breaking her bangles. A girl brought her father’s dead body in a car. She said that she and her brother went to many hospitals pleading for treatment for their father but none of the hospitals gave him an admission and he finally succumbed in the car. The poor girl drove the car herself with her father’s dead body in it. I finally cremated his body,” he said. 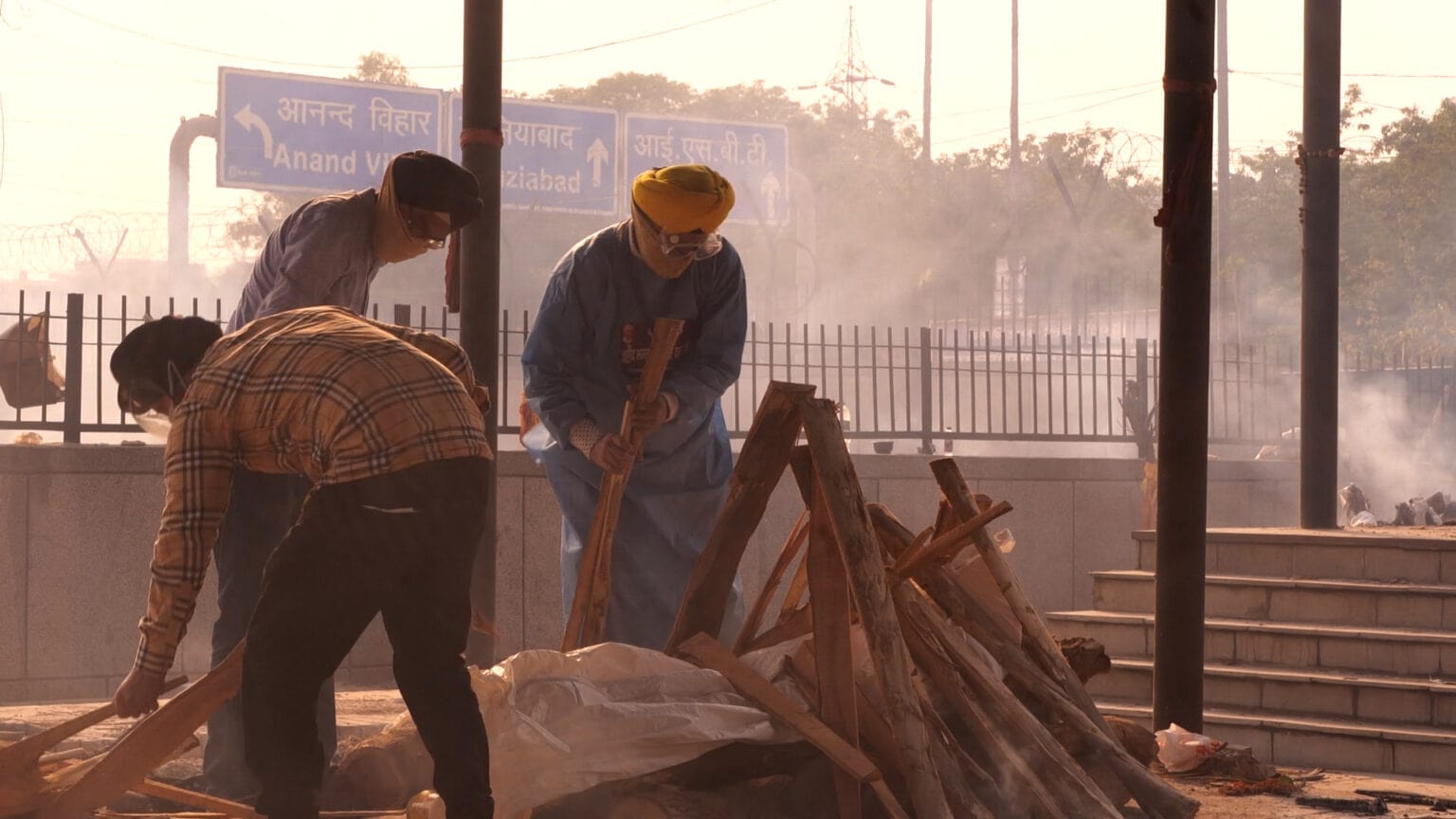 We also spoke to many wood carriers and cremators in the cremation site. “Whoever comes here, they dump the dead bodies and run away. We pile wood for those dead bodies. We light the funeral pyres. If we don’t work, all these bodies will remain here itself untouched,” said a cremator.

“We cremate 105 to 120 dead bodies everyday.  We work round the clock. We are filled with grief. We can’t express it in words,” said another cremator. We spoke to a wood carrier who said, “We are taking a lot of trouble but we don’t have a problem. Our job is to pile wood. It is our responsibility”.

Another cremator pointed us to a huge pile of wood and said that the numbers of dead bodies are so high that the wood will vanish in an hour. “In this place, daily 100 quintals of wood gets finished,” he said. 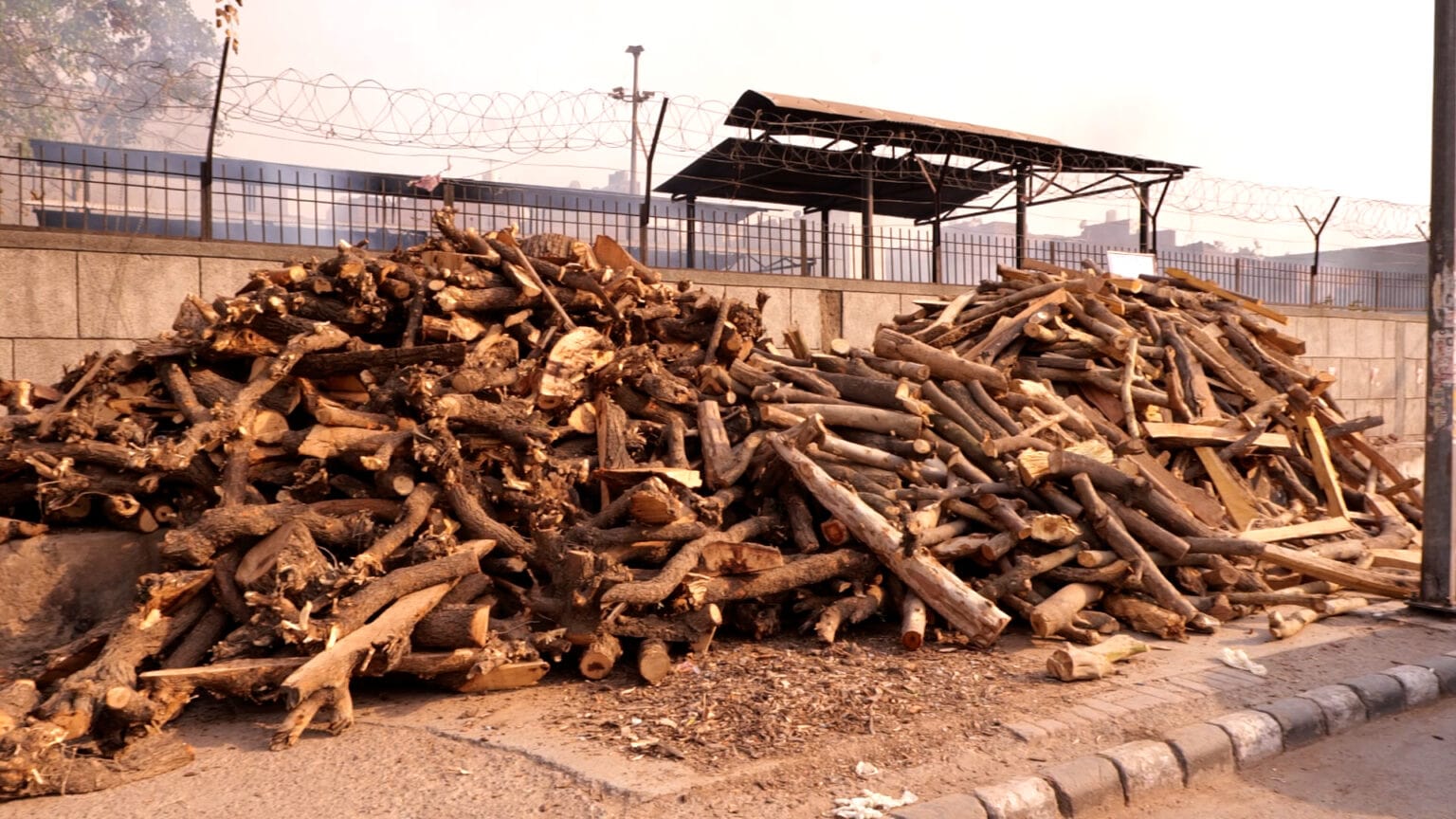 Kamaljeet Kaur who lost her mother-in-law due to Covid was seen wailing helplessly in the cremation site. Speaking to The Probe, she said:  “We faced a lot of problems. We were not getting an ambulance. Shunty ji sent an ambulance and we finally got the dead body here and we got it cremated. During this time, nobody wants to stand with others. Everyone wants to safeguard their own interest.”

In the midst of all this shock and suffering, we spoke to many people who said that they are battling larger demons than Covid-19: corruption, apathy from the establishment and complete breakdown of the government machinery.

“When I see what is going on right now, I feel that human beings are not dying, humanity is dying. No one is caring for the dead. People are hopeless. Hospital authorities are kicking people out. In my ambulance itself so many people have died. This is a very bad time. This is such a scary and turbulent period for the country. If we don’t serve the country today, the country will not forgive us,” he added.

Speaking to The Probe, Balkishen Sharma, whose elder brother passed away due to Covid said, “When I came here, I was shocked to see the worst side of humanity. I just want to tell everyone one thing, you may earn millions of diamonds and pearls but coffins don’t have pockets. No matter how much a person earns, he cannot take it with him on his last journey. He must leave it behind”.

This is the biggest tragedy of our times. While scores of people continue to suffer, even for the dead, it seems, the problems are plenty. Left to die by a careless system, disowned by their kith and kin, burnt by strangers, fleeced by the greedy – there is no dignity in death for these Covid-19 victims.

If you like this story and if you appreciate our Ad-Free Independent Journalism platform, show us your support by becoming our Member. Our Journalism can only sustain itself and survive if well-meaning people like you pay for news. Click here to become our Member.
TagsCovid deathsCovid-19Delhi crematoriumsEast DelhiOld Seemapuri Cremation GroundPublic health
Related articles More from author More from category
PrevNext