The Probe's deep investigation uncovers one of the worst forms of child labour in the world.
Investigations

A little boy stands inside a grave, digging out mounds of mud. He sees our cameras and ducks – into the grave he has dug for the dead. The image should make an entire nation hang its head in shame. Our team witnessed children digging graves for the dead in some graveyards across the country. A sight that pierces the heart and shames the soul. This is the plight of our children – the story of India’s child gravediggers.

“Around a 100 meters from where the Covid-19 positive graves were being dug, in the same graveyard, which was specifically allocated for Covid-19 fatalities by the government, I saw a 7-year-old kid taking out mud from a grave. As a journalist and as a person, I could see the future of our country digging its own grave,” said Arjun Samar Mahendran, Founder, Newshound India Foundation, who was witness to one such incident.

A child seen digging a grave under elderly supervision | The Probe

The little boy was amidst a mound of mud, digging a grave with tender hands that were supposed to hold a cricket bat or a pen. “As soon as the child realised he was being captured on video, he straightaway ducked. It did not even take him one second to duck. They know what is going on. He might be a child but he does not have an option and he knows that it’s not right to be doing what he is doing,” Arjun said.

The boy was spotted in a graveyard in Bangalore. The situation is no different for the children in the north of India. In many parts of the country, during the pandemic, underprivileged children were spotted holding shovels to dig graves – just to make ends meet and to fend not just for themselves, but for their families too. In the heart of the national capital, a boy was found casually playing with a shovel, the same one he would later use to dig graves. Shovels were then put into a cycle cart by children on their way to graveyards. 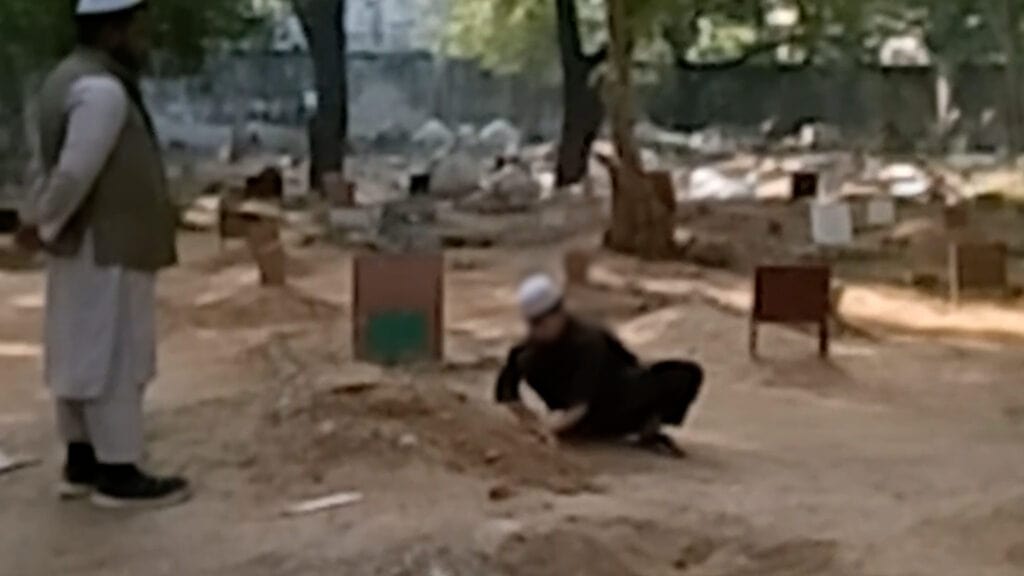 In another instance, we saw young boys pick up shovels and get ready to dig graves under elderly supervision – elders, who with hands in pockets, watched the children dig graves. At times, we also saw children play with mud among the buried dead. In some graveyards, young boys bore the weight of tombstones. Their childhood was lost, and yet they carried tombstones to mark the dead. “I think it’s perhaps one of the gravest forms of child labour and in fact we prefer to call it worst form of child labour because a graveyard is a situation where even ordinary people will be very scared to go and they will feel very uncomfortable about it,” said Amod Kanth, Founder, Prayas, an NGO working for child rights. 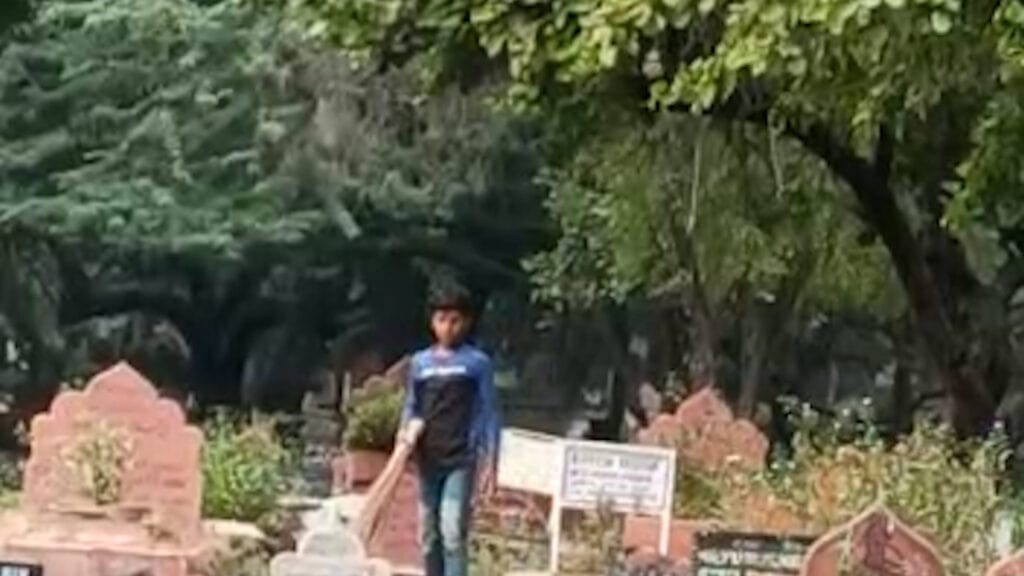 A child seen brooming a graveyard | The Probe

If digging graves was not shocking enough, in many other graves across the country, children were seen sprinkling water on graves, brooming graveyards, cementing and plastering graves and in some cases, even lending a hand to bury the dead. We approached the National Commission for Protection of Child Rights (NCPCR) and the National Human Rights Commission (NHRC) for answers. “Criminals are employing children this way. The Commission will consider these employers as criminals. NCPCR’s request to you is to immediately provide us with information. We will ensure that an FIR is lodged against the perpetrators and the children are sent under a rehabilitation plan,” said Priyank Kanoongo, Chairperson, NCPCR.

“It depends upon the age of the child because children are also statutorily or legally entitled to work beyond the age of 14 years. There has to be a violation of human rights and as per the Protection of Human Rights Act. So, that has to be ensured first. If the Commission finds that it is a case of violation of human rights, it will certainly take cognizance of the same,” stated Jyotika Kalra, a member of the NHRC.

The Child and Adolescent Labour (Prohibition and Regulation) Act of 1986 in India prohibits the employment of a child. According to this law, it is a criminal offence to employ children below the age of 14 years. Under the international conventions laid out by the International Labour Organisation, this form of labour by children falls in the category of Hazardous Child Labour – “any form of labour that is likely to harm the health, safety or the morals of children”. The ILO categorises such labour as among the Worst Forms of Child Labour.

Child labour has no excuse. When children are forced to earn at an age when they must go to school and learn, we must ask ourselves, how long will we allow our children to bury their dreams in graveyards they dig for the dead?

Latest update:  Our child gravedigger story has had an impact. The Indian government has taken note and have assured that the guilty will be penalised and the children will be rescued and placed under a rehabilitation programme. Watch our Impact story here.

If you like this story and if you appreciate our Ad-Free Independent Journalism platform, show us your support by becoming our Member. Our Journalism can only sustain itself and survive if well-meaning people like you pay for news. Click here to become our Member.
TagsBangaloreChild GravediggersChild LabourForced labourHuman rightsImpact JournalismIndiaNCPCRNHRC
Related articles More from author More from category
PrevNext