Lakhimpur Kheri massacre: In the status report before SC, UP police inserts the word “honourable” four times to address the Minister while translating the FIR - The Probe

Lakhimpur Kheri massacre: In the status report before SC, UP police inserts the word “honourable” four times to address the Minister while translating the FIR

The UP police FIR contains allegations of criminal conspiracy against the Minister of State for Home Affairs Ajay Mishra. Even when the FIR has been registered under section 120 B, which pertains to criminal conspiracy, the Minister’s name is not mentioned as an accused in the FIR. The probe deep dives.
The Probe Newsdesk
India
READ 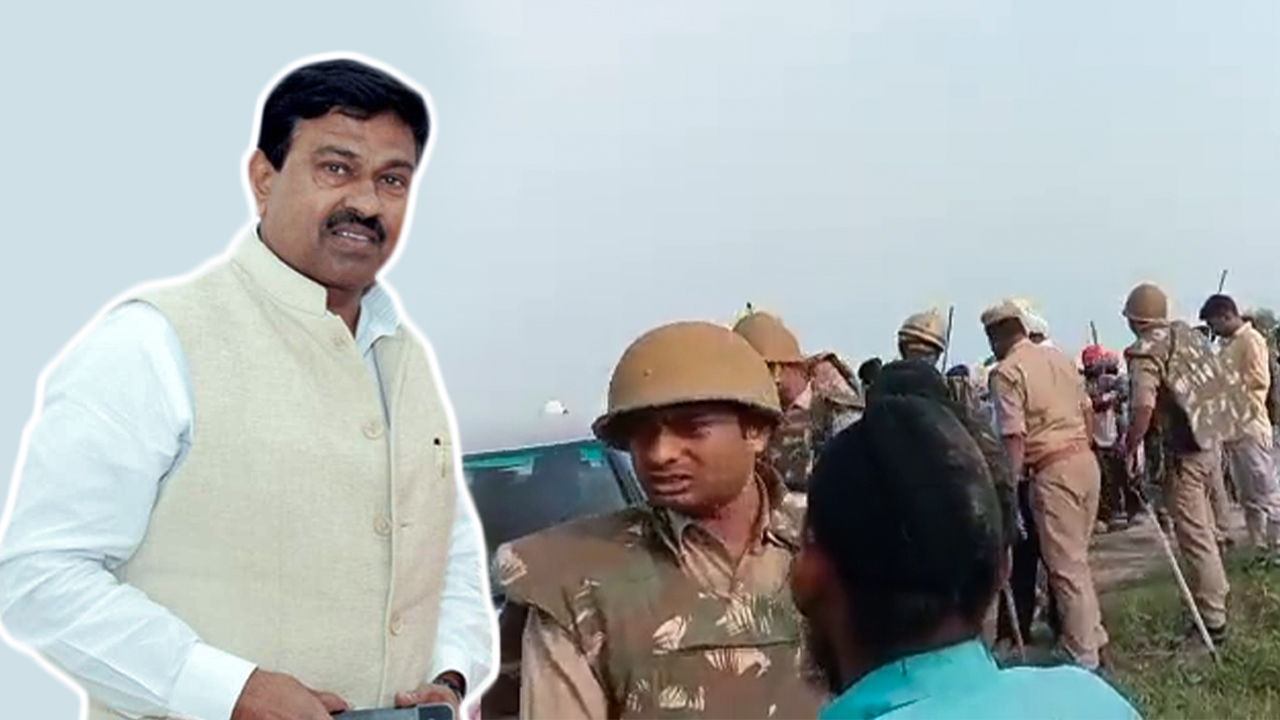 The UP government filed its status report before the Supreme Court in the Lakhimpur Kheri case on Friday. The Apex Court in its order stated that the Court was not satisfied with the status report filed by the State government.

The UP police has drawn flak from various quarters for not taking swift action against the accused in the case. The Probe delved deeper into the status report to find out whether the UP government may have overlooked certain rules in its investigation into the Lakhimpur Kheri massacre.

What is striking about the status report filed by the UP government before the Supreme Court is the insertion of the words “Honourable” while referring to the Minister of State for Home in the translated version of the contents of the FIR.

Take a look at the document below. This is the original Hindi version of the FIR in which MoS Home Ajay Mishra has been accused of criminal conspiracy.

Now take a look at the english translated version of the contents of the First Information Report which was filed as part of the status report by the UP government before the Apex Court. In the english translation, the word “honourable” has been used four times to refer to the Minister of State for Home Affairs, Ajay Mishra Teni. This, even when the original hindi version of the FIR, does not contain the word “honourable” while making a reference to the Minister. The question is, why was the word “honourable” added four times while translating the contents of the FIR from Hindi to English. 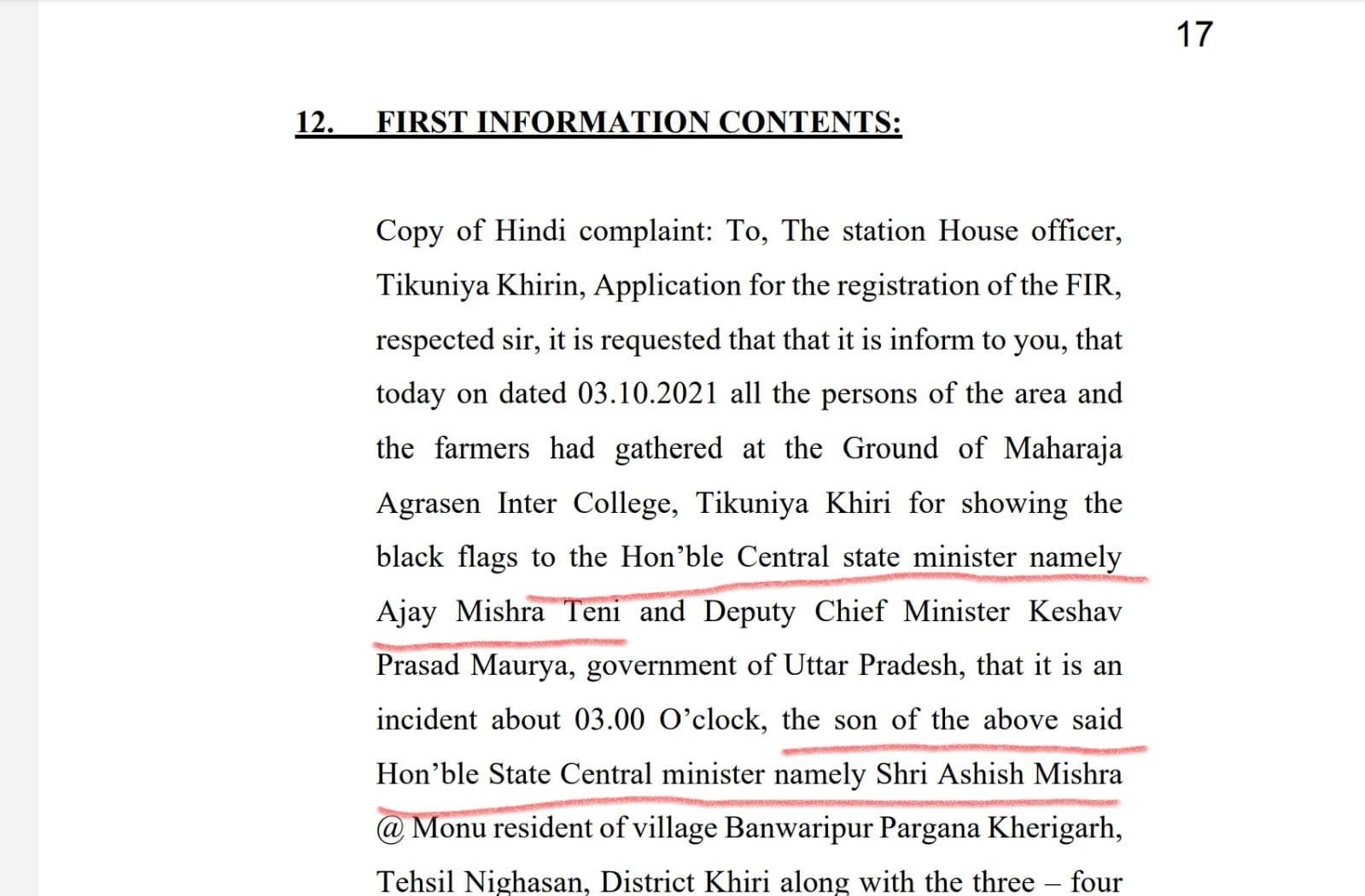 Image 2 | English translation of the contents of the FIR 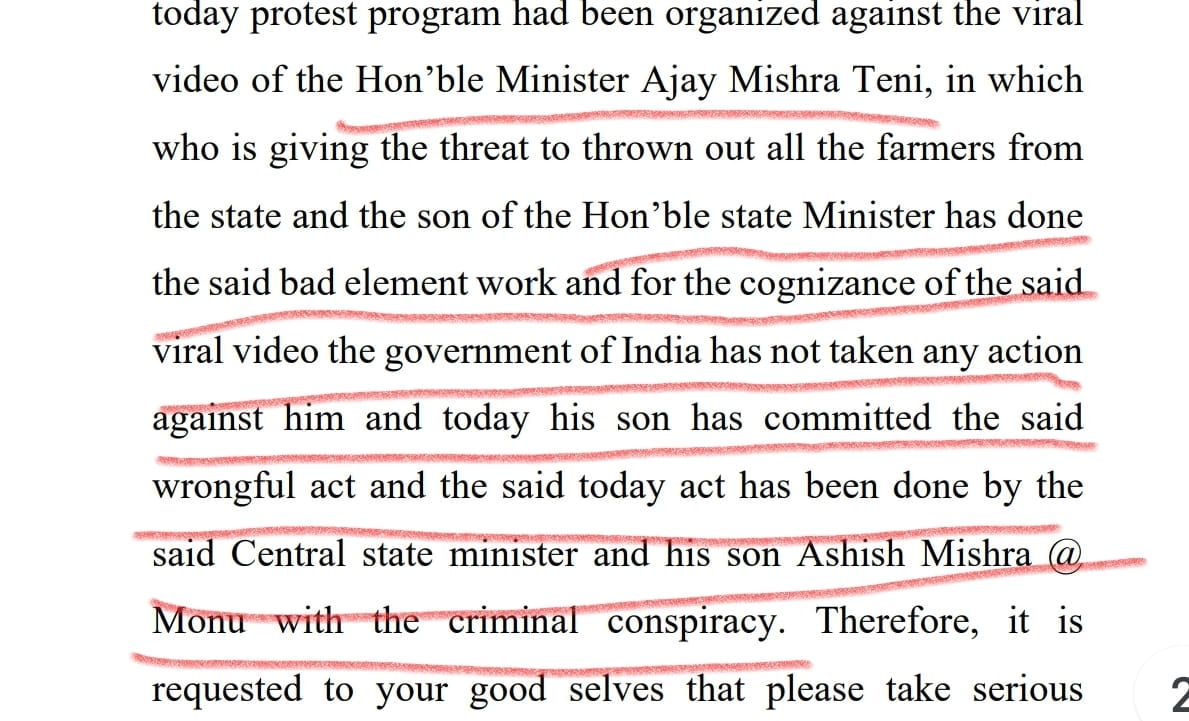 Image 3 | English translation of the contents of the FIR

This perhaps shows the worshipful mindset of the UP police towards the Minister in question and his ministerial authority. Now, take a look at the image below. This is part of the FIR that mentions that – apart from many other sections of the IPC – section 120 B, which pertains to criminal conspiracy has also been registered against the accused. 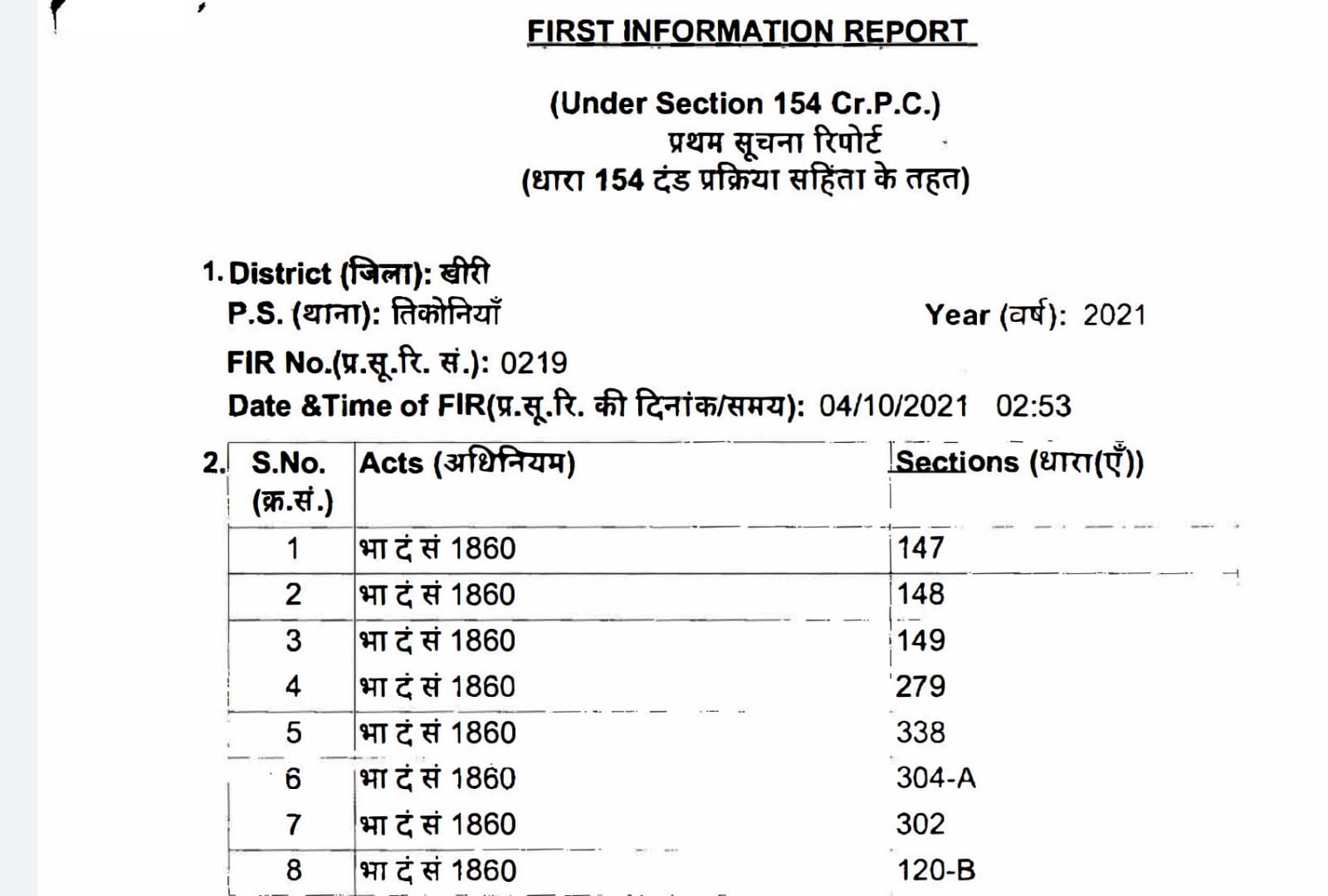 Image 4 | Original copy of the FIR

Image 5 | Original copy of the FIR

This apart, even when the Minister himself has admitted that the vehicle that mowed down the farmers was his vehicle, the UP police did not deem it necessary to call the Minister for questioning. These glaring discrepancies in the UP police’s investigation into the Lakhimpur case shows that no free and fair investigation can take place when the police is overwhelmed by the presence of a high profile “honourable” personality in the case.

Speaking to The Probe, advocate CS Panda who filed the PIL in the Supreme court in the matter said: “This status report is not going to suffice. The families who lost their dear ones, were hoping for a succour from the establishment. It is an eye-wash. These farmers lost their lives when they were protesting peacefully. They were killed for no fault of theirs. I am hopeful that the Apex Court will step in and give relief to the families of the victims and bring the perpetrators to justice.”

The Probe also spoke to advocate SK Tripathi who was the co-petitioner in the PIL filed before the Supreme court in the matter. “We are not satisfied with the status report. The FIR clearly mentions the name of Ashish Mishra, the son of MoS Home Ajay Mishra Teni. But despite that he was neither questioned nor arrested by the UP police. All the investigating team members from the police belong to the State government under the BJP, how then can justice be served? A common man would have been arrested within two hours but in this case, the UP police is not acting because powerful individuals are involved,” said Tripathi.

Minister of State for Home, Ajay Mishra answering questions from the media on the Lakhimpur Kheri massacre

Nearly a week after the incident, when the UP police finally summoned the accused Ashish Mishra (son of Union Minister of State for Home Ajay Mishra), he failed to appear before the probe agency on Friday. The UP police was seen pasting yet another notice outside the residence of Minister Ajay Mishra in Lakhimpur Kheri asking Ashish Mishra to appear before the agency at 11 a.m on Saturday.

Speaking at a conclave organised by a TV channel, UP Chief Minister Yogi Adityanath said on Friday, “The Lakhimpur Kheri incident is unfortunate and the government is getting to the bottom of the incident. We will not allow anyone to take law into their own hands. We cannot just arrest an individual based on the allegations levelled against the individual by someone else. But yes, if there are criminals, we won’t let them go scot free”.

Minister of State for Home, Ajay Mishra addressing the media on the Lakhimpur Kheri incident

Asserting that there is no evidence in the matter suggesting that the Minister’s son was in the car, UP CM said: “So far there is no evidence regarding this. We had circulated a number also asking the people that if anyone had any evidence, they can upload it to that number. So far nothing incriminating has come. We will not do injustice to anyone. We will not let people take law into their hands but at the same time we will also not take action based on pressure from any quarters.”

Speaking to the media, Minister of State for Home Ajay Mishra Teni said: “Police had issued summons to my son yesterday but since he was not feeling well he could not answer his summons. My son has said that he will answer his summons tomorrow (Saturday) and he will clear his stand on the matter. He will produce all the evidence before the investigating agency because he is innocent. The BJP government is a government that does impartial investigation. Whoever is found guilty, action will be taken against them.”

The Minister further added: “You have seen clearly how the unlawful elements who had disguised themselves as farmers had killed so many people. My son too would have been killed had he been present in that spot when the incident had taken place. The allegations against my son are false.” 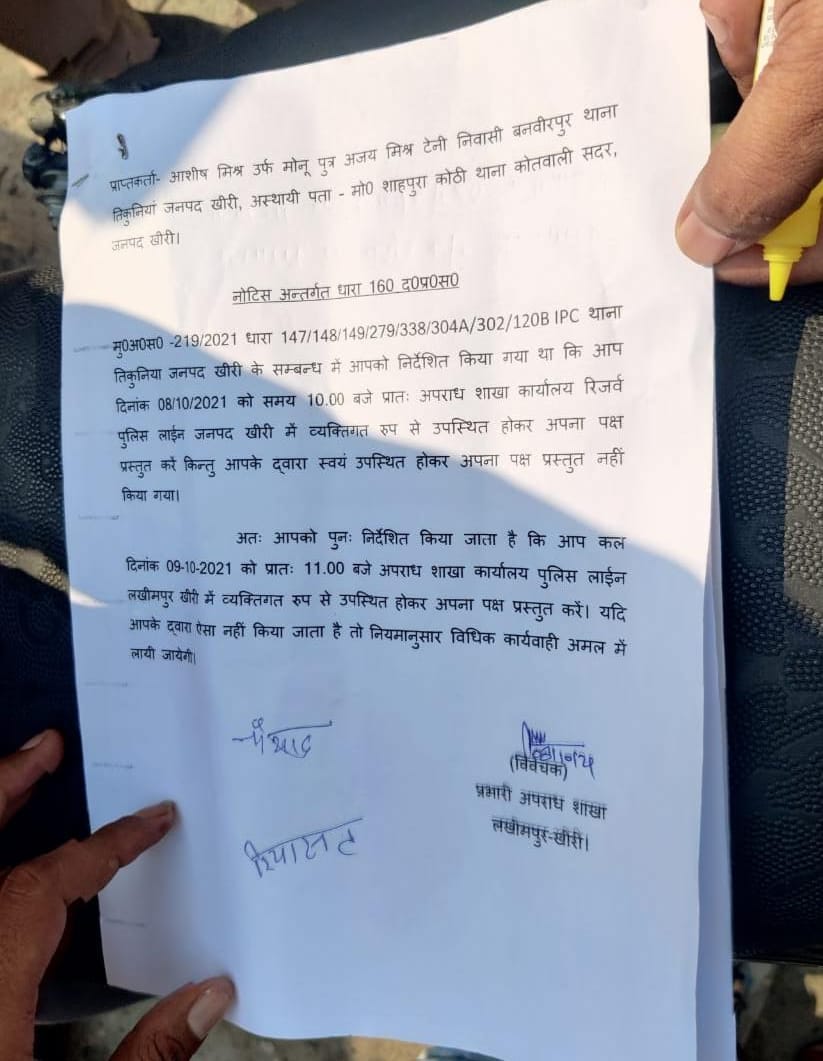 The second notice that was pasted by the UP police outside the residence of MoS Home Ajay Mishra asking his son Ashish Mishra to appear before the probe agency on Saturday at 11 a.m.

The Supreme Court on Friday had also rapped the UP government for its poor investigation in the Lakhimpur case. The Apex Court in its order stated: “On a perusal of the Status Report and considering the submissions of learned senior counsel, we wish to observe that we are not satisfied with the steps taken so far by the State Government. The learned senior counsel has given an assurance to this court that he will talk to the concerned authorities of the State Government and ensure that necessary steps be taken keeping in view the concerns expressed by this Court.”

Senior Advocate Harish Salve who appeared for the UP government stated that he will communicate with the State Government to get the investigation of the incident conducted by another agency for free, fair and impartial investigation of the case. Harish Salve also stated that he will communicate with the highest police authorities in the State to protect and preserve the evidence and other materials related to the incident.

The Supreme Court has posted the next date of hearing in the case to October 20.