The Supreme Court today rapped the UP government for the way it handled the Lakhimpur Kheri investigation. The Apex Court said it was not satisfied with the steps taken by the UP government in the case related to the October 3 violence that had left 8 dead and several others injured.

While the status report mentioned the details of the FIRs registered in the case, the police team and the judicial enquiry commission that was formed, the report was silent on why immediate action was not taken to question or arrest the main accused in the case.

The SC bench headed by Justice NV Ramana today said that the court was not happy with the measures taken by the State government in the matter. The top court asked the UP government, “what message are you sending?” 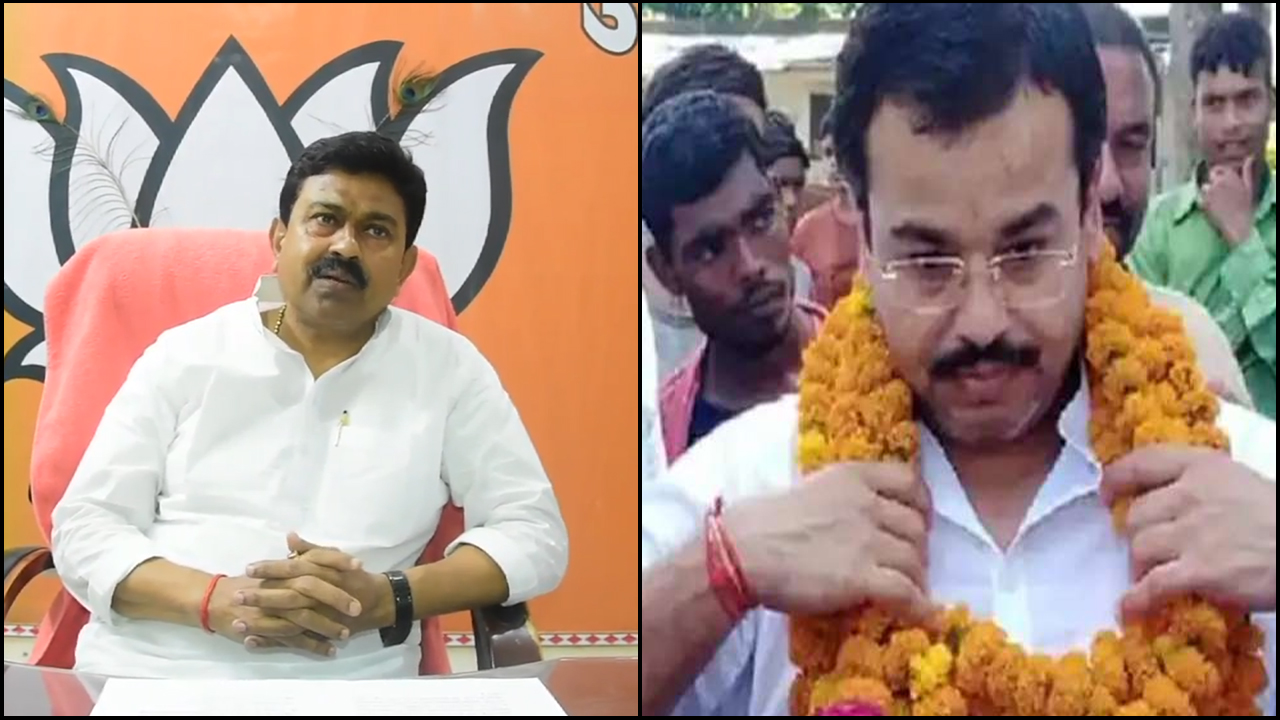 Noting that the State government’s action is only on words, the court asked whether the other accused in the country against whom similar sections are filed will be treated the same way. The court also stated that the highest police officer must protect the evidence in the case.

Admitting before the Apex Court that action taken so far was not satisfactory, senior advocate Harish Salve, who appeared for the UP government said that remedial measures will be taken soon. When Salve had recommended to the court that the case may be handed over to the CBI, the court noted, “CBI is not a solution for reasons known to you… because of the persons… better some other person looks into this…”. The Supreme Court has posted the matter for hearing on October 20.

Notice pasted by the UP police outside the residence of Union MoS, Home Ajay Mishra

Nearly a week after the incident, when the UP police finally summoned the accused in the case Ashish Mishra (son of Union Minister of State for Home Ajay Mishra), he failed to appear before the probe agency. On Friday, the UP police pasted yet another notice outside the residence of Minister Ajay Mishra in Lakhimpur Kheri asking Ashish Mishra to appear before the agency at 11 a.m on Saturday.

WHAT DOES THE STATUS REPORT OF THE UP GOVERNMENT SAY?

Medical treatment to the mother of the diseased Lavpreet Singh

The report states that on October 7, the medical team was sent a second time after she complained of a mild headache, weakness and anxiety. She was medically examined by the Medical Superintendent and diagnosed with post traumatic stress disorder and was advised treatment.

In its report, the UP government states that in the incident that took place on October 3, 8 persons had died and 5 persons were injured. The UP police had lodged 2 FIRs in the matter. 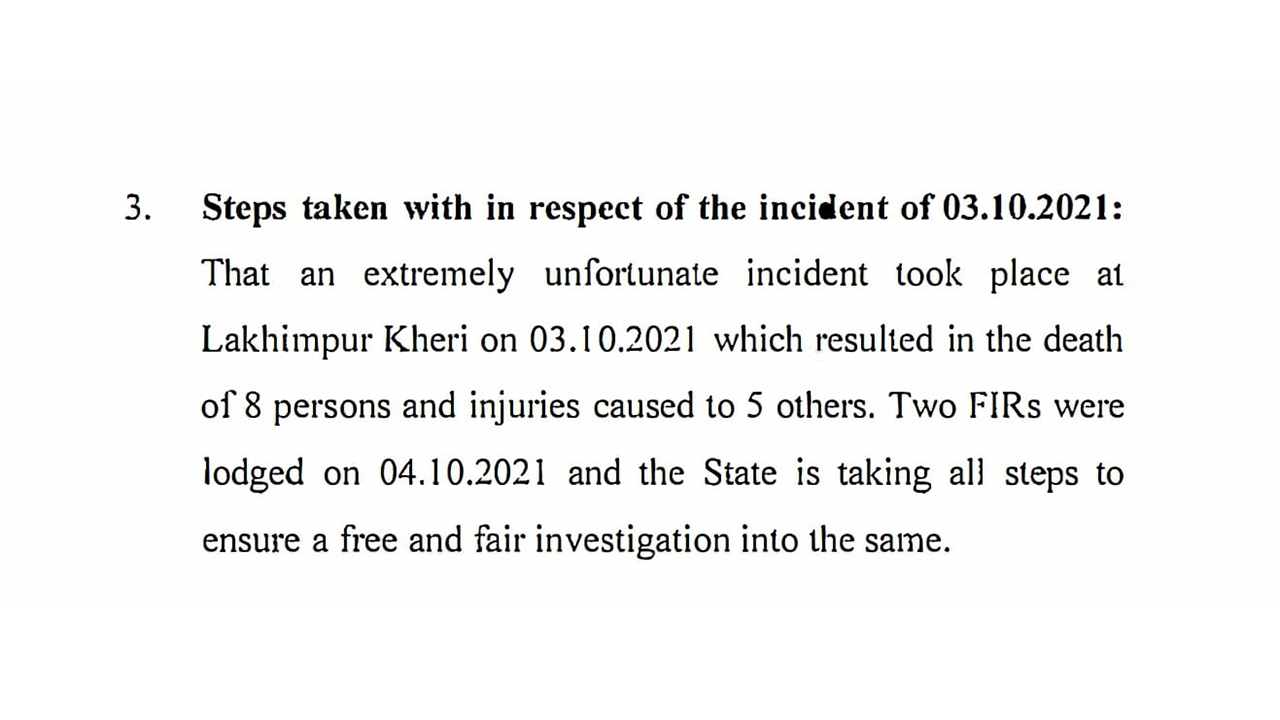 The first FIR was registered against Ashish Mishra, son of Union Minister Ajay Mishra and 15 to 20 unknown miscreants under sections 147, 148, 149, 279, 338, 345A, 302, 120B of the IPC. The FIR was filed against them for the death of the four farmers Lavpreet Singh, Nakshatra Singh, Daljeet Singh and Guruwinder Singh.

The status report states that Ashish Mishra was issued a notice under section 160 of the CrPC on October 7 to appear before the Crime Branch in Kheri on October 8 at 10 a.m. The Government has also informed the Apex Court that two more accused in the case Luvkush and Ashish Pandey have been arrested.

According to the UP government, a second FIR was registered against unknown persons after complaints that the rioting farmers had killed four people; Raman Kashyap (Journalist), Shubham Mishra, Hariom and Shyam Sunder.

The government in its status report states: “Postmortem of all the diseased was conducted by a panel of doctors. That upon the request of the family members of the deceased Gurvinder Singh, a re-postmortem was done upon which a combined team of senior doctors and specialists of King George Medical University and Sanjay Gandhi Post Graduate Institute was specially constituted and sent to Bahraich and the aforesaid panel conducted re-postmortem on 5-10-2021 under videography.” 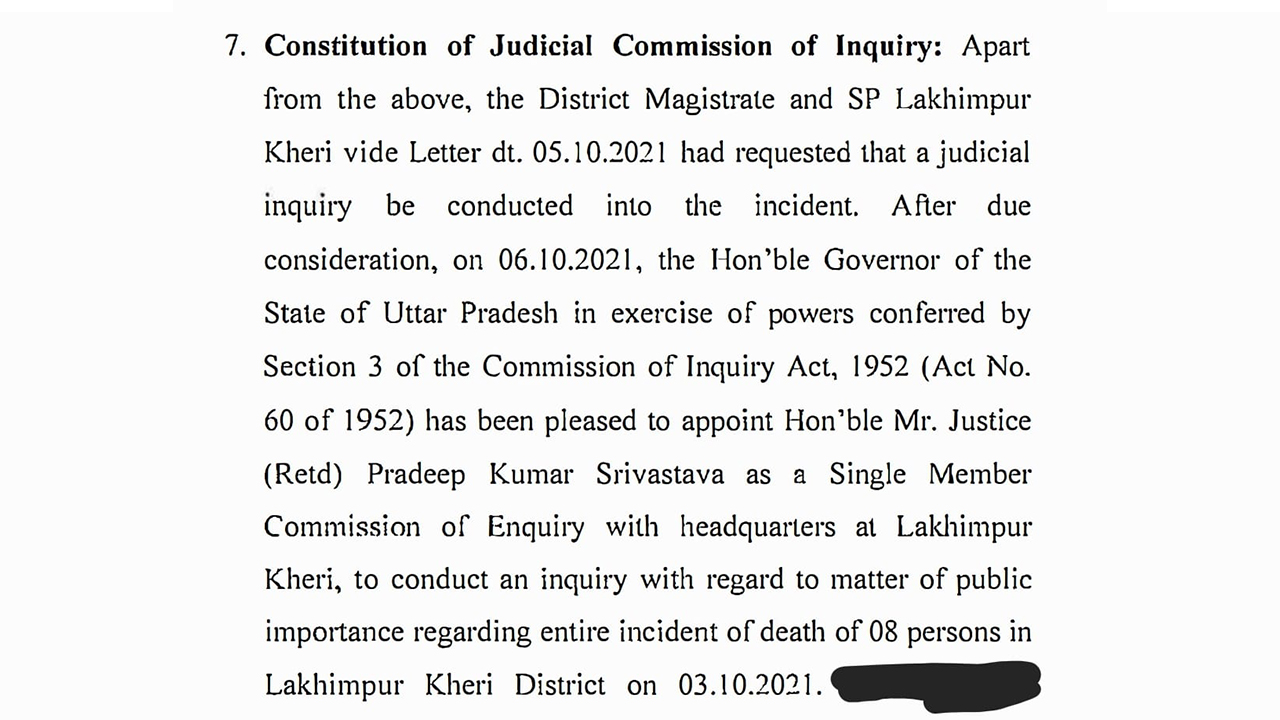 The SC was informed that a Special Investigation Supervisory Team was constituted by the UP government on October 5. The team was later expanded by the DGP to include DIG Upendra Agarwal as its head. The team comprises 8 other members.

The status report also mentions that following a request from the District Magistrate and the SP of Lakhimpur Kheri, the government on October 6 had set up a single member commission of enquiry under retired Justice Pradeep Kumar Srivastava to enquire into the matter.