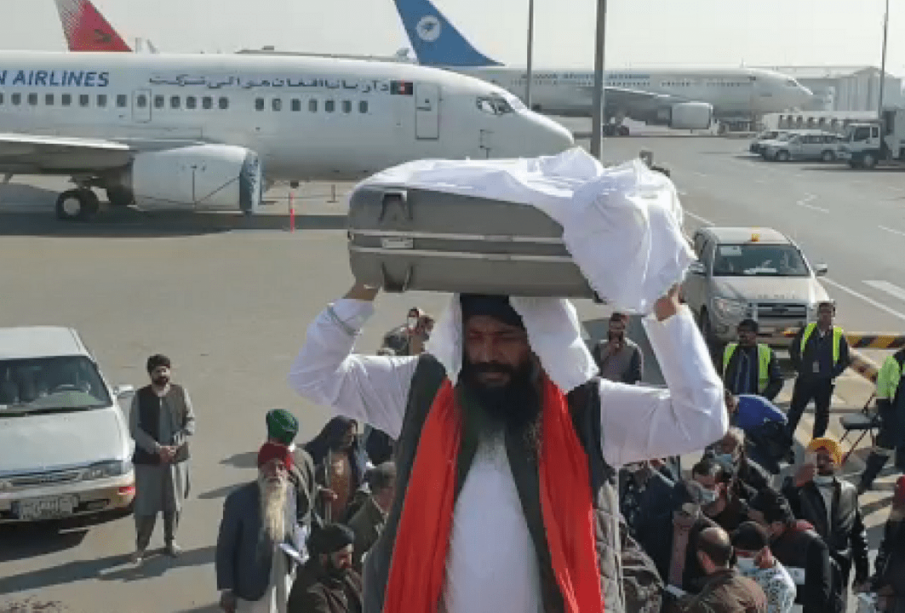 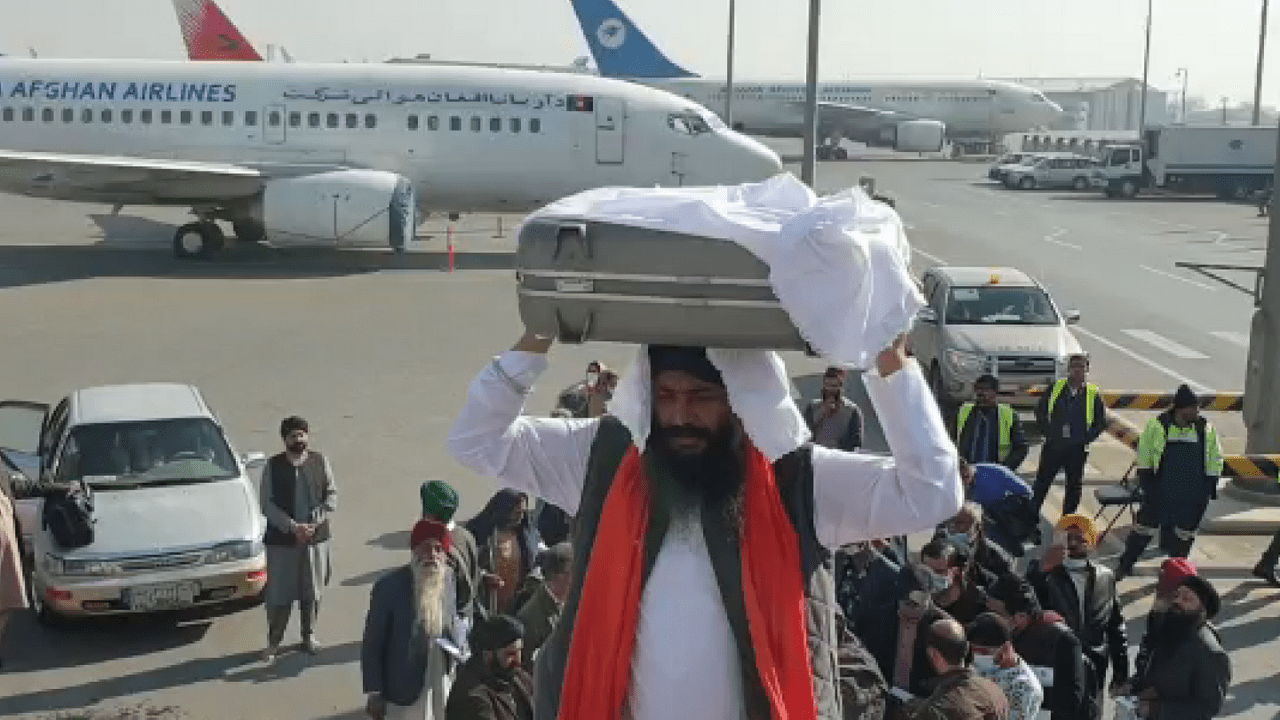 The Delhi High Court had recently issued a directive to the Centre to decide on the representation of the stranded Indians and Afghan nationals in Afghanistan. The Delhi High Court had acted after taking cognisance of an affidavit filed by Parminder Pal Singh, a former spokesperson with the Delhi Sikh Gurdwara Management Committee.

Some of the stranded nationals being escorted to the Kabul airport by the Afghan Taliban security personnel | Video courtesy: Special arrangement

“Over 100 people have arrived in Delhi. At the same time, some more people missed their flight and they couldn’t leave Afghanistan due to some personal reasons. The Indian government issued visas to many people. Apart from the people who came back, there were also 24 more Indian citizens along with their Afghan spouses. We waited for them till the eleventh hour. But they didn’t reach the Kabul airport,” said Puneet Singh Chandhok, President, Indian World Forum.

The Indian World Forum also informed The Probe that besides the stranded nationals, three holy scriptures – Guru Granth Sahib from historical gurudwaras in Afghanistan and Hindu religious scriptures including the Bhagavad Gita and Ramcharitmanas from the 5th century Asamai Mandir in Kabul – were flown to India.

Led by Sh @JPNadda Ji and @HardeepSPuri Ji, we are Blessed to welcome Holy Granths from Afghanistan to India 🙏🏻 pic.twitter.com/Iy2PwPvfW5

“These were handwritten scriptures that date back to several centuries. After the Taliban takeover of Afghanistan there was virtually nobody left in Afghanistan to safekeep these holy scriptures. They were lying deserted in Afghanistan. So, it was decided that it must be brought to India. The Government of India has facilitated this flight. The security contingent of the Taliban and their foreign ministry facilitated the travel of these nationals from their respective locations to the Kabul airport. Over 100 people reached the Kabul airport today and they have been brought back safely to Delhi,” said Chandok.

Speaking to The Probe, Piara Singh, an Afghan national who was part of the evacuation program said: “I have come to India for the very first time. I was living in Khost in Afghanistan. Earlier, the situation in Afghanistan was alright. I was a priest in ‘Asamai’ temple. The condition got worse in the last four months. We were neither allowed to put our holy mark (tilak) on our foreheads, nor allowed to sing our holy prayers. To make sure that the Hindus do not create any problems, they kept us under strict surveillance.”

Piara’s brother is still in Afghanistan. Worrying about his family’s safety, he said, “The fact that my brother is still in Afghanistan worries me. There was nobody to take care of the Asamai temple. So my brother decided to stay back. Around 15-20 families are still there. If the situation worsens, he will come back with them. But right now he is there along with his wife to take care of the temple and its belongings. Earlier, the Taliban had detained my brother and interrogated him for an hour. He was later released but it’s a scary situation out there”.

As per the India World Forum, the Sikh holy scriptures will be taken to the Guru Arjan Dev Ji Gurudwara in Mahavir Nagar in Delhi and the Hindu scriptures will be moved to the Asamai Mandir in Faridabad. The evacuation of the nationals has been carried out by the Indian government as part of their Operation Devi Shakti programme. Operation Devi Shakti is an evacuation programme carried out by India to rescue Indian citizens and foreign nationals in Afghanistan following the collapse of the Islamic Republic of Afghanistan and the takeover of the country by the Taliban.

Under Operation Devi Shakti, a special Kam Air flight arranged by India has arrived in New Delhi from Kabul.

It has brought 10 Indians and 94 Afghans including members of the Afghan Hindu-Sikh minority community. Among the evacuees are 9 children, including 3 infants.

Tweeting on the arrival of the Indian and Afghan nationals, MEA spokesperson Arindam Bagchi said: “Under Operation Devi Shakti, a special Kam Air flight arranged by India has arrived in New Delhi from Kabul. It has brought 10 Indians and 94 Afghans including members of the Afghan Hindu-Sikh minority community. Among the evacuees are 9 children, including 3 infants.”

Abdul Wahid Shaghafi, another Afghan national who was evacuated by the Indian mission, told us that many of his family members are still left behind in Afghanistan. They couldn’t board the flight as their paperwork was pending.

“I also had a conversation with the foundation on how my family members can be brought to India but they were non-committal. But I am still very happy that I could move out of Afghanistan. The situation in Afghanistan is worsening day by day. There are explosions on a daily basis. There is food inflation and poverty. Unemployment is at its peak. After the Taliban took over, all the universities and schools had to shut down. There were travel restrictions. We couldn’t leave our houses after six in the evening. Even during the day, we couldn’t move freely around the city. I am very happy that finally I have found my freedom,” said Shaghafi.

The returnees who landed in New Delhi and who need financial assistance and rehabilitation will be supported by the Sobti foundation along with other organisations that have been working towards the well-being of these communities in distress. “We will be providing them space to live. We will give them a house on rent as per the size of the family for a year at least. We will also provide them with a monthly maintenance amount so that they can meet their monthly expenses. We also hope to provide them medical insurance. We will provide them with all assistance,” said Kanv Bhalla, Founder of Sobti Foundation. 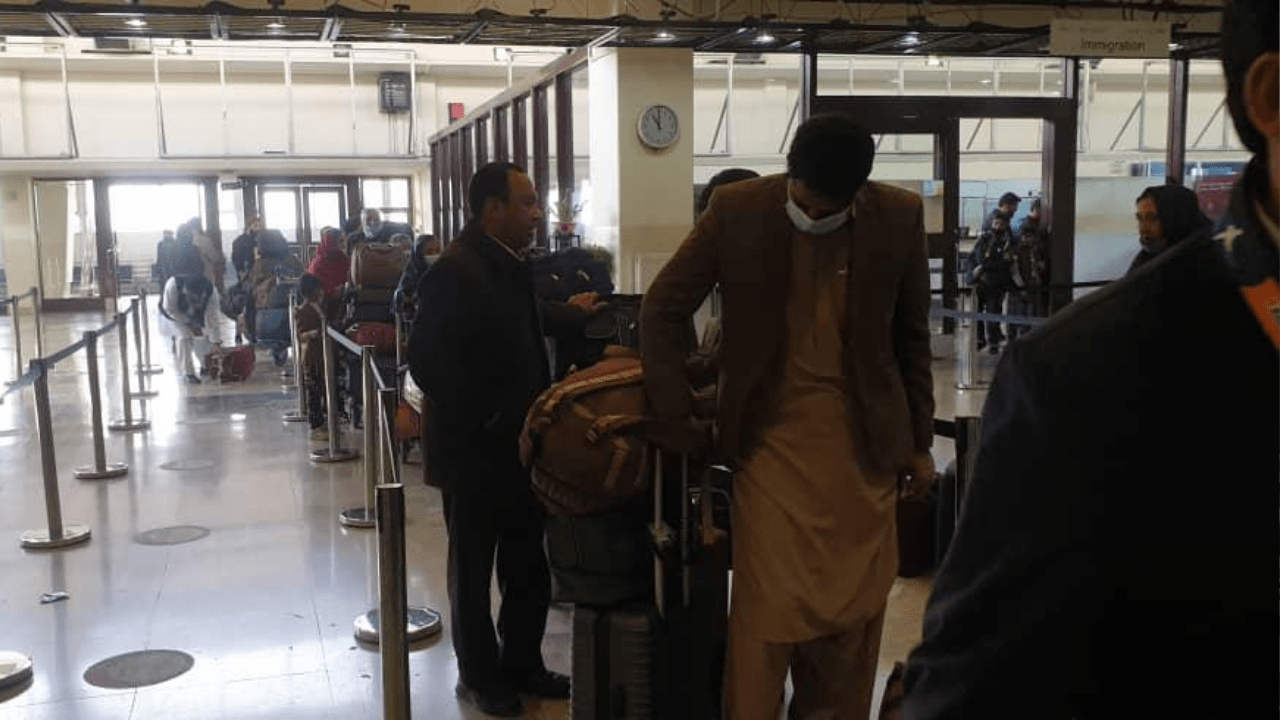 The Afghan and Indian nationals in Kabul airport in Afghanistan waiting to board the special Kam Air flight to reach New Delhi | Pic courtesy: Special arrangement

“We are very happy to inform that the family of Mahram Ali, a local security guard who was killed during the terror attack in Gurdwara Guru Har Rai, Shor Bazar in Kabul have also been airlifted and this family too will be rehabilitated by the Sobti Foundation,” said Chandok.

The Afghan and Indian nationals on board the special Kam Air flight on their way to New Delhi | Video courtesy: Special arrangement

“Some people could not take the flight and return to India but we are very happy for all the people who have come back. Many organisations are involved in ensuring the well-being of these nationals. We all have decided that their expense for a whole year will be taken care of. This feat would not have been achieved without the support of the Indian government. Earlier, the Taliban regime was also not cooperating in the evacuation but finally the Indian government exerted pressure on the Taliban regime and these distressed citizens came back,” said Guljeet Singh, President of Gurudwara Guru Nanak Sahib, Vikaspuri.

A few weeks back, the Afghan nationals of Hindu and Sikh origin had written to the Indian government after the government had invalidated their e-visas. Speaking to The Probe, some of the affected Afghan nationals had previously claimed that their old valid visas which were issued by the embassy of India in Kabul were cancelled without prior notice. The government’s move to rescue all the stranded nationals have now come as a huge reprieve to all the Indian origin Afghan nationals whose visas were invalidated because of which they were left in the lurch in Kabul after the Taliban took over Afghanistan.

If you like this story and if you appreciate our Ad-Free Independent Journalism platform, show us your support by becoming our Member. Our Journalism can only sustain itself and survive if well-meaning people like you pay for news. Click here to become our Member.
TagsAfghanistanIndian GovernmentKabul airportMEA
Related articles More from author More from category
PrevNext