Queer prose: An absurd(ist) response to the mania of hyper-identification - The Probe

Queer prose: An absurd(ist) response to the mania of hyper-identification

The end of June is nearing, and it has been a month of normalised, corporatised social media campaigns on rainbows. Indian corporations and service providers have taken to Pride month rather effortlessly – thanks to top-down sensitisation from their global counterparts and pressure to maintain an image in their sector. It is an interesting change of events, a seeming legitimisation of diversity that the Indian corporate sector is openly embracing and even flaunting. Who would have thought the sexuality movement would pick up like this in South Asia?

Not so long ago, must have been 2016, I remember facilitating a workshop on creative writing and script design for enthusiastic corporate employees aspiring to be filmmakers. Responding to the lead facilitator’s prodding, I attempted to aid participants in developing writing around inner conflict. On suggesting the LGBTQ community as a context, I had a participant rebellion at hand. Despite a dialogue to engage in a potential practice session of making and shooting a narrative, they staged a walkout. Things have drastically shifted since 2019. It is trendy to work on queer narratives now.

Before I speak about queerness, a quick recourse through anecdotal memory.

In 2008, Bangalore had its first pride march, nearly after a decade of activists, queer individuals, and collectives mustered the courage to meet, discuss and make themselves public. Since then and before, LGBT communities have had extraordinarily challenging private lives and have risque negotiations with the terrain of privacy and publicness. Apart from the usual dangers of risk to personal security and other extortionist tactics by opportunist torturers (much of whom have constituted family members or state and law-and-order bodies, ironically and at other times, opportunistic lovers too), the sheer layers of psycho-social complications in communication, authenticity, self-worth, mental health and functionality have remained compromised.

In 2008, I filmed this historical moment (rather shoddily) in my hand-held magnetic tape camcorder (as we called it); three hundred of us had walked from a relatively conservative part of the city’s neighbourhood, Basavanagudi, to Town Hall. It was oddly discomforting and freeing to be slogan shouting and going public in India about sexuality. Many roared, “Nanna deha nannadu” (my body belongs to me), to register agency and autonomy over their gender and sexuality expression. The life-force and punch at this protest were transgender women and women sex workers. Both communities came from poorer social classes but were not hesitant to dance, sing and celebrate in resistance around the policemen who had harassed and tortured them for decades. Middle-and upper-middle-class queer individuals and allies walked timidly behind the raucous resistance of celebration that led them. In 2015, when I last attended the Pride march, I could hardly find the class of sex workers and transgender women who had previously taken part in the celebrations. The movement had been taken over by scores of well-heeled members of society looking gay and confident, with close to 4000 people attending that year.

It has been an eventful decade, with the digits 3 7 7 occupying all our consciousness till 2018 and quickly disappearing without a trace soon after. In 2009, progressive judges of the Delhi High Court had created history by decriminalising queer communities and striking down section 377 of the Indian Penal code. In 2013, India curiously saw a recriminalisation of LGBTQ communities by the Supreme Court. In 2018, India’s highest court responded to a curative petition and effectively reversed its faux pas. The past decade has been nothing short of dramatic.

It is interesting to note that this unequivocal judgement favouring LGBTQ identities came before the recent legalisation of consensual sex work (which thankfully comes in the form of the reprimand of law and order agencies that harass women sex-workers). It is equally interesting to note that those who seem to have benefitted drastically from legal decriminalisation are cis-gendered, upwardly mobile gay men and pinkwashing capitalism.

By now, I am sure you are itching to ask me, “are you queer?”. I am, however, not in the mood to answer directly. What’s the fun in that? Is it common practice for humans to proclaim their sexuality irrespective of what they identify as? Would it be permissible to ask for juicy details about what their preferences are? Mainstream society fetishises LGBTQ individuals due to their ability to be freer with sexual explorations. This binary of queer and straight has created a psycho-cultural projection of sexuality issues as an LGBTQ problem. On the other hand, I have been more concerned with women’s public and private culture of expressions and forms of courtship in the public space due to deep empathy for the nature of debilitating public and private lives led by many of the ‘normals’.

I also joke about how I have had to be in the closet about a ton of other things, and my sexuality was the least of them. For example, I went to a highly coveted (for my generation) convent school and was in the closet for the longest time about my love and training in Indian classical music. Amongst the atmosphere created in the school by most students who were into ‘cool’ stuff, regional or ethnic identity was relegated to being the least cool. Due to the persistence of a musically inclined Christian biology teacher, I trudged with my veena to be part of the music band he mentored, one that comprised western-style guitarists and drummers. I had temporarily and suddenly graduated to ‘cool’ after an annual music event opened to great reception. I had come out.

I have since felt queer for various reasons: being an academic thud in school, thus becoming a real disappointment for my father. Being ethnically Tamil, but more in resonance with Kannada culture; being Indian but speaking and thinking in English more than an Indian language; being male-bodied but hardly feeling the need to perform masculinity in a conventional way. The most significant aspect of my queerness is, being a creative practitioner but often having to disidentify from being an ‘artist’.

Through most of these negotiations, many more questions arise, and more concentric circles and resultant complexification. These days, I am queer in an India divided by left and right-wing politics as it forges an infallible affiliation with or seeks brash supremacy over the western intellectual landscape through snooty compliance or hollowed-out dissent. I look for wounds beyond the social landscape and find traces in historical and cultural processes which have been distorted or erased from collective memory. I am queer because I have been a mesmerised scientist and a curious sceptic at both culture and nature and find them both deeply misunderstood and ‘mis-seen’. I am queer because I find it important to look for compassion within any intellectual pursuit and within any human endeavour.

What truly is queer but a minority experience, what truly is society but a hardened one whose ears are shut, and what really is community but a failing one that cannot comprehend contradictions and offer hugs? True queerness, in today’s world, would be a love affair with the earth as we hang near our end so precariously. Frail as we are, we set about “saving the earth” or “rescuing our faith”, both of which have lost their significance in the larger scheme of our story. Is it a question of secularism, faith, or both? Is it a question of justice, power, or polarisation? Is it a question of straight, queerness or humanness? The answer would lie in your ability to choose (m)any of the third paths. 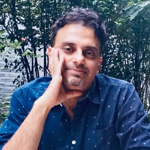