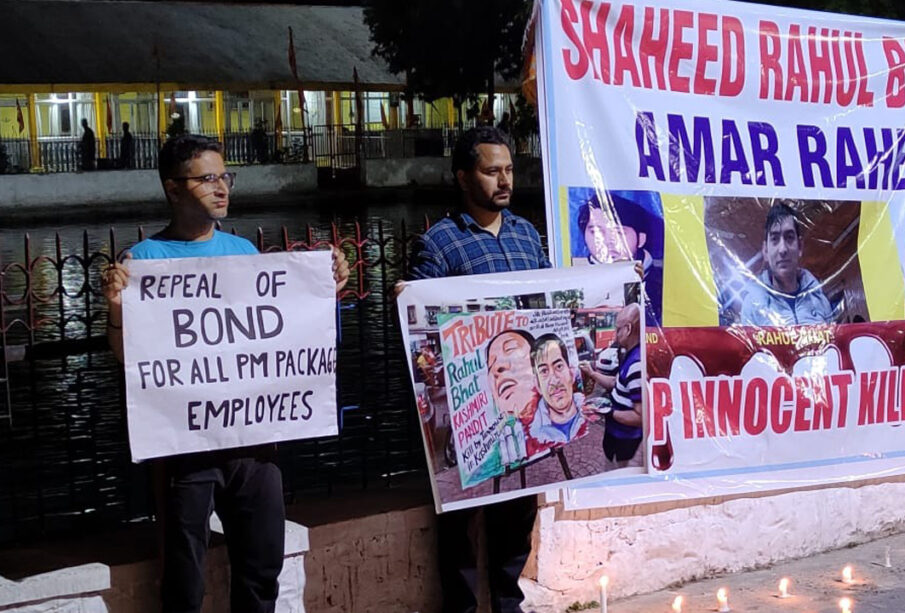 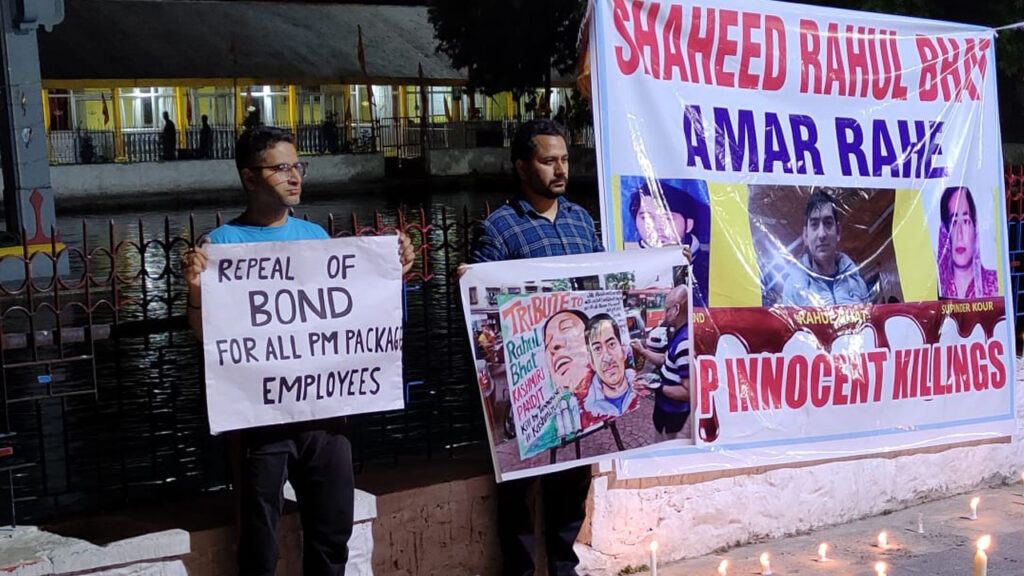 The broad daylight assassination of the migrant Pandit employee Rahul Bhat (36) at his Tehsildar office in Chadoora, Budgam, in the Kashmir valley on 12 May 2022 has raised big questions over the sustainability of the government policy introduced in 2008 for return and rehabilitation of the displaced minority community.

Manohar Lalgami, a journalist from Kashmir talks to The Probe

Like the killing spree by terrorists ahead of the Union Home Minister Amit Shah’s visit in October 2021, Bhat’s murder has sent shockwaves across the Union Territory. It has simultaneously brought into question the much repeated claims of normalcy made by the authorities after the abrogation of Article 370 in August 2019.

Bhat is the first of around 4,000 Kashmiri Pandits employed under the Prime Minister’s special package for the displaced community’s return and rehabilitation who has fallen to the terrorists’ bullet. It is for the first time since 1990 that the Kashmiri Pandits staged demonstrations and shouted slogans, among others, against the BJP, the Home Minister and the Lieutenant Governor, holding them all responsible for their failure to safeguard the migrant employees.

Bhat’s family has been complaining that the Deputy Commissioner of Budgam did not respond to their repeated requests, seeking his transfer back to the Budgam Tehsil office or any other secure place. Appointed as class IV orderly in the PM Package’s first batch in 2010, Bhat was promoted as Junior Assistant in 2020 and transferred in 2021 from Tehsildar office Budgam to Tehsildar office Chadoora.

Every killing creates a fear. Even if one person is killed, that terrifies everyone. The government must ensure the safety and security of its citizens. Even the administration has started discriminating against the Kashmiri Pandits. They have been denied promotion that was due to them. Their juniors are promoted and Kashmiri Pandits always face such neglect and discrimination. This must change.

“His transfer orders came at a time when an insidious resentment against the minority community was taking root due to some judicial and executive orders dispossessing the Muslim buyers of the lands they had purchased 30 years back from the Pandits. There was a clear possibility of the militants exploiting such a situation and striking on a soft target from the minority community,” said a rehabilitated employee at Sheikhpora, where Bhat lived with his wife and a 5-year-old daughter before his murder.

‘Kashmir Tigers’, which is believed to be a front for a formidable jihadist outfit, while claiming responsibility for Bhat’s killing, alleged that he was ‘neck-deep in corruption’. Subsequent guerrilla claims identified the Pandits appointed in Revenue and Sales Tax departments as their first target. It was claimed that they had grabbed 30 per cent of the jobs in the two departments. Separately, a narrative was created that these employees were helping the government in issuing domicile certificates and other documents to the ‘outsiders’ besides retrieving the sold-out lands from the Muslim buyers.

Under such circumstances, it looks indiscreet to transfer and post a Pandit employee of the PM’s package at the highly vulnerable Chadoora. This is the place where Hizbul Mujahideen terror Khalid-e-Sani spread a wave of terror with multiple killings in 1997-2000, where a Station House Officer was shot dead in broad daylight and where hundreds of civilians, beginning with ex-MLA Mir Mustafa, were killed in the last 32 years. Contrarily, Budgam is perceived as safe as nobody has died in a terror attack in the district for over 24 years.

After the erstwhile State’s reorganisation in August 2019, the UT Government has generated an online service encouraging and facilitating the aggrieved Pandits to retrieve the lands allegedly sold out in violation of the Jammu and Kashmir Migrant Immovable Property (Preservation, Protection and Restraint on Distress Sales) Act, 1997. Many of the land purchases from the Pandits have happened against the ‘power of attorney’ rather than the formal sale deed. Like the one about 7 kanals and 5 marlas of land at Ropora Chadoora in December 2021, these have not been sustained in the Jammu and Kashmir High Court. However, most of the Pandit sellers have not claimed the lands back.

Bhat’s former officers and acquaintances do not subscribe to the militant allegations. “He was the most intelligent, hardworking, dutiful and people-friendly official of my staff,” Nusrat Aziz, formerly Tehsildar of Budgam and currently Tehsildar of Anantnag said. “His performance was wonderful for all the 18 months of his duty in my office, particularly during the lockdown after J&K’s reorganisation in August 2019 and the Covid-19 pandemic. He handled much of our work at Srinagar airport.”

Mujtaba Hussain of Budgam, who is looking for a government job, said: “Last year when he was posted in Budgam, he got my Economically Weaker Section (EWS) certificate prepared within a few days. It remains valid for a government job application for one year. This year, when Bhat had been transferred, the revenue officials in Budgam wasted my two months with the formalities. I am still waiting for the certificate, which may take two more weeks”.

All the 600-odd Pandits appointed in different government services around the Home Minister’s visit in October 2021 are traumatised. Over 500 of them have been posted in the Sales Tax Department and Fund Office. Neither of them attended office after Bhat’s killing nor had escaped back to Jammu.

“We have locked ourselves inside our private accommodations. We haven’t been given any government or secure accommodation, and we haven’t even received any salary in the last seven months,”  a Sub Inspector in the Sales Tax Department, told The Probe. “In a national newspaper story, revenue and sales tax employees have been reported as the top targets.”

Sarpanch Ajay Pandita Bharti was shot dead at Luka Bhawan in Anantnag on 9 June 2020. Chairman Municipal Committee Tral Rakesh Pandita was gunned down at Tral on 2 June 2021. Chemist Makhan Lal Bindroo was shot dead at his pharmacy in Srinagar on 5 October 2021. Chemist Bal Krishen a.k.a Sonu, was left critically injured at Chotigam Shopian on 4 April 2022. Revenue official Rahul Bhat fell to the terrorists’ bullets at Chadoora on 12 May 2022.

The first migrant colony was established in Kashmir 20 years back at Sheikhpora, Budgam. In 2010, the first batch of the PM’s package beneficiaries was accommodated at Sheikhpora. Bhat was one among them. He and his family had survived the first massacre of the resident Pandits when seven of the minority community members were killed at Sangrampora in March 1997.

While some, like Bhat’s family, escaped to Jammu, others were settled at the district headquarters of Budgam. Bhat is the first from Sheikhpora to fall to the terrorists’ bullets.

Most of the rehabilitated employees have been accommodated at the so-called migrant transit camps at Sheikhpora (Budgam), Haal (Pulwama), Vessu (Kulgam), Mattan (Anantnag), Nutnusa (Kupwara) and Veerwan (Baramulla). In several places, their presence at public offices and schools is being seen as an indicator of normalcy and an epitaph on separatist militancy.

Out of a total of 6,000 posts announced under the PM Package, nearly 3,800 Kashmiri Migrants were rehabilitated with government jobs in Kashmir till March 2021. Of these, 520 candidates returned to Kashmir after the abrogation of Article 370. Out of the 6,000 dwelling units approved at an estimated Rs 920 crore, 1025 have been constructed at safe places until March 2021, and 1,488 are still under construction.

It was only after Bhat’s assassination that LG Manoj Sinha announced that all the migrant employees would remain posted at the district and tehsil headquarters.

Journalist Manohar Lalgami, living at Sheikhpora Migrant Camp since 2007, believes that nobody would flee to Jammu or other places out of fear. “They had already migrated in 1990, and now they have returned to retain their jobs, but they have left their parents and families in Jammu. Besides, it’s not a 1990-like system breakdown. It has a huge psychological impact because of today’s conventional and social media, but such sporadic attacks have also been digested as a routine by many. Also, the migrants are under a contractual undertaking to permanently work in Kashmir,” Lalgami asserted. 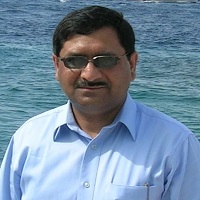