Comparing India’s inflation basket with the rest of the world, clearly, India could be underpricing its inflation currently with less impact from energy and pass-through of input costs into services.
by Anitha Rangan
Stories 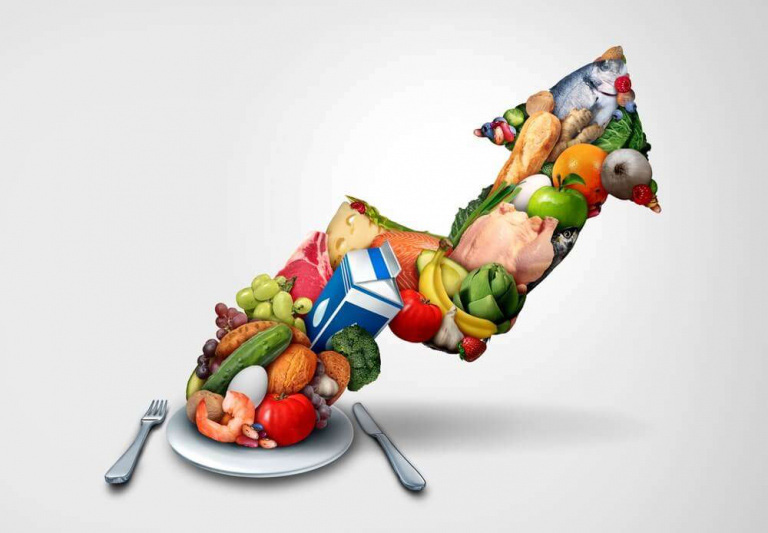 Are we measuring our inflation right? | Photo courtesy: fpsa.org

India’s retail inflation, measured by the Consumer Price Index or CPI is not biting as hard as it is for the developed world, igniting a lot of tough central bank actions and challenging the world economic outlook. While a lot is being said and discussed about India’s inflation data, perhaps it is also time to revisit the domestic inflation construct. The current CPI construct has been followed from 2015 onwards with a base year of 2012 and measures the change in prices of goods and services consumed by the average Indian consumer. The weightages and patterns are based on the Consumer Expenditure Survey (CES) of 2011-12. However, is it a good reflection of the average consumption basket, and how does it compare with the rest of the world?

Looking at the key headline components, in comparison with the developed world, India’s very high proportion of food leaves less room for other services like housing, transport and communication, recreation and other household goods and services. Furthermore, India’s retail inflation does not include certain components like services from restaurants (food away from home), ownership of housing (under housing services), and financial services, including insurance. Housing captures only urban housing and excludes rural housing.

Even in comparison to the developing world, India’s proportion of food is very high, with relatively lesser weight given to housing and transport services. Many Emerging Market (EM) countries also have reasonable importance given to ‘food away from home’, which is in contrast with India. Several EM countries review the weights every five years, while some review them yearly.

Over the last ten years, India’s per capita GDP and Private Final Consumption Expenditure (PFCE) have more than doubled, which warrants a review of the consumption pattern. In addition, whether items like firewood need to have a 2% weight, whether the doctor’s fees and hospital & nursing charges account for only 13% & 7% of the total health costs, whether items like horse cart fare, cow-dung (albeit small) need to feature in the basket do need to be assessed.

India’s importance to food in its inflation basket and, more importantly, uncooked food in the form of cereals, pulses, oils, spices, and milk is perhaps the highest. While the Philippines has a higher share of total food, the difference is from “food away or eating out”. Notably, our inflation mix misses “eating out” or food from restaurants. If the GDP composition includes “trade, hotels etc”, then the inflation basket warrants the inclusion of the same. And this is not difficult to compile, being a part of GST.

The CES 2011-12 survey points out that most food groups had suffered a decline in share over the 18 years (FY94-FY12). The decline was steepest for cereals, which had halved over the period for both rural and urban India. The share of vegetables had also fallen, with beverages being the only exception which rose over the period. Notably, the decline is also evident over the 7-year period from FY05 – FY12, which positively suggests that the current weights need to be revisited. 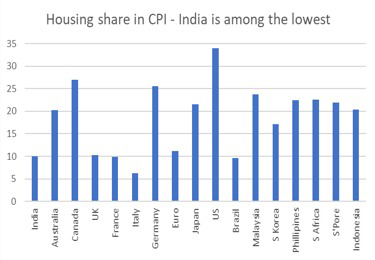 In contrast to food, India’s share of housing in its retail inflation is relatively lower. The inflation index comprises only urban housing as the methodology includes only rent and notes that there is a negligible number of rental dwellings in rural areas. This conclusion itself may warrant a check as the rural dynamics have changed over the decade. Also, the index excludes housing ownership costs and assigns negligible importance to maintenance and utility costs. The cost of real estate ownership differs in different parts of the country, and unless ownership costs are captured, the index will underestimate the divergence in the cost of living across the country. Note that the index values are published statewise and for rural/urban separately. For a diverse country like India, housing costs, if captured adequately, will help to price the labour cost appropriately and attract the right talent. It is interesting to note that many EMs have a high share of housing within their CPI Index. 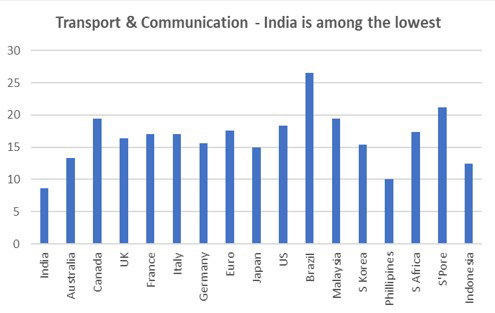 Transport and Communication – Underplaying the importance of mobility

Being an importer of energy, the lower relative proportion of motor fuel undermines the impact of energy inflation. Furthermore, India’s CPI derives a moderate contribution from the ownership and maintenance cost of vehicles (similar to housing). With increasing private vehicle ownership in the country, both in rural and urban, capturing the complete cost of ownership of a vehicle (both private and commercial) is key to measuring the real cost pressures. 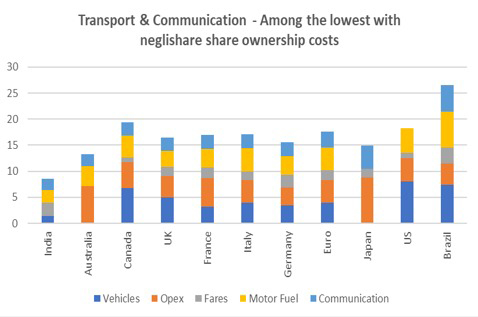 Are we giving less importance to recreation and capturing it right by ignoring the costs of the financial services? If RBI’s rate actions are directed at reducing inflation (by reducing demand via increasing borrowing cost), then including the cost of financial services seems appropriate. Giving a low weightage to recreation reduces the discretionary component of the inflation index, thereby lowering the efficacy of measuring policy impacts. Furthermore, the rural-urban divergence also needs to be examined, as rural households are anecdotally consuming more services than in the previous decade. 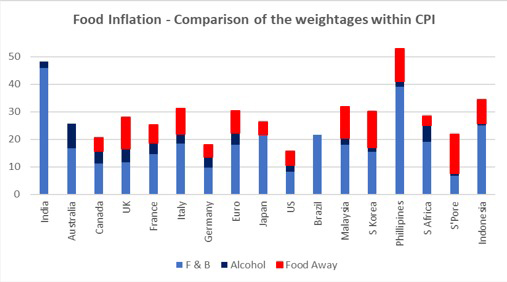 Food and energy are the two key direct culprits plaguing global inflation today. But slowly and steadily, the pass-through to services and other components has led to more broad-based pricing pressures across the world. Traditionally, the structure of India’s food inflation has been volatile and susceptible to monsoons leading the central bank to “look through” the temporary disparities. Globally, food prices led by supply chain disruptions have risen sharply, and India too has faced the impact, viz. oils. However, being a producer of the bulk of the food basket, viz. cereals, pulses, spices, and vegetables, among others, the impact of global prices has been to a lesser degree. 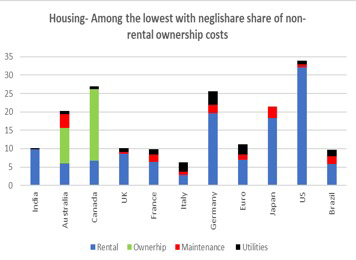 Comparing India’s inflation basket with the rest of the world, clearly, India could be underpricing its inflation currently with less impact from energy and pass-through of input costs into services. The risk from over-pricing may be limited as RBI always tends to look through temporary effects. India’s wholesale price inflation, which does not capture services, has been at double digits for more than a year now. The divergence between CPI and WPI inflation within India may indicate that both indices warrant a review.

However, with CPI as the nominal anchor for RBI, adequacy in the measurement of retail inflation is critical. Furthermore, if we take comfort from domestic inflation being less sinister than the world, it has to be comparable. Looking at the global retail index composition, it definitely feels that in India, Food is eating more than its share!


The future of the world rides on how the crisis in Europe plays out. For the war to end, a lot of deals will have to be struck, including one on burying deep the origin of the Coronavirus.

Anitha Rangan is an economist at Equirus Group. She has over 16 years of experience in the financial services industry spanning local and global capital markets. In her previous stints, she has worked with HSBC Asset Management, CRISIL Reasearch, Lehman Brothers and Nomura. Her areas of interest are macro-economic trends and analysing their impact on capital markets across asset classes.