Chitra Subramaniam on how some journalists have blood on their hands

(A few days ago, a former journalist with a Hindi news channel - News Nation - revealed that his organisation gave standing instructions to reporters not to speak against any BJP leader, including the Prime Minister; criticise the opposition; to instigate Muslims and make them give out controversial statements. The channel reporters interviewed young Muslim children and asked them questions about which they would have little or no knowledge to make them look bad. This and all the vicious reporting going on in India in the name of journalism is the context to this article.)
by Chitra Subramaniam
ColumnsStories

Galling, vicious and vile. I have no other words to describe the journalism that some star anchors and talking heads indulge in every day. In fact, it is not journalism, and I don’t know what it is. This much is certain – I do not wish to dignify muck by any other name because muck it is. When you have to lean on little children with skull caps to do your bilious bit, it is not journalism – it is an outpouring of hatred and venom that is in your system. Your own inadequacies limit you, so you look for helpless people in difficult situations, and you stick your microphone and cameras on them.

You are chasing your own ghosts when you run after politicians and their ilk in search of what you think is a story. I know some of the star anchors as I do some talking heads, and I am astonished to note how cleverly they have disguised themselves till recently. Ladies and gentlemen – the gloves are off. You have come searching for us, and you will find us.

To those who call themselves journalists, I ask – how do you see yourself in the mirror every day? How do you sleep knowing fully well that your irresponsibility and ego may kill someone, fan a communal riot or lead to fights with no beginnings and ends? How many lies do you spread in your newsroom every day in the name of journalism?

It’s not just the editor who needs to think – it’s the whole chain of command that is involved. Stories just don’t get written by themselves. There’s an entire process behind them. Succumbing to money and ratings is the death of journalism. Everybody knows what an editor will like or dump. So you work towards an agenda. It’s not rocket science. There’s blood on your hands.

Journalism was a part of India’s freedom struggle. Have you not read the Indian Constitution and the Preamble to it? Does that not mean anything to you? Have you read the debates in our Constituent Assembly to know that men and women, brilliant minds, debated so many issues for months before the final document emerged? You can judge them with hindsight – what would you have done in their place? Oh, why do I even ask – you would have run into the safety of your gated house or community or pigeon holes of suspicion and despair called newsrooms you run from where you would hold forward on courage and truth, both of which you cannot even spell let alone live up to.

Journalism is a noble profession. It and India have given me a lot, and hopefully, I have made a small contribution. When I put pen to paper, I think about what it means to those who trust me. Trust is a huge responsibility, and it has to be earned every day. I am only as good as the last story I wrote. Journalists who sit on their laurels are fools.

I am proud of what Indian journalism has given me and continues to do so despite all the rough and tumble and low and high tides. International ratings that criticise media freedom in India do not bother me at all because I know these can be bought and fixed. A few dollars here and there, and you will get the rating you want. Greed is international, and it also hunts in packs. Narratives are not accidental – they are built. They are not ambitious because groups have no ambition. It takes leadership to be truly ambitious, and I can see leadership emerging in Indian journalism.

Who are we? We are journalists who believe in good journalism of the kind that has fired so many wonderful conversations in our country. We believe in India and its institutions, and we will occupy the space that we will open jointly and individually in the hope that generations that come after us have a few planks to stand on. We believe in the rough and tumble of our young democracy that is celebrating its 75th year in 2022. We know the work that has gone into ensuring that over 800 million people vote every five years to elect lawmakers, and that’s more than the population of the United States (US) and western Europe combined.

There’s a tide in Indian journalism. Independent digital media organisations and independent journalists have come up across India, and they write in many languages, including English. They give hope to the noble profession and to many Indians who still look up to us despite what some of us have done to journalism. I can see it. All around the country, there are hundreds of young women and men who are working and waiting to see how low you will sink. I can see it.

We were small communities to begin with, but now we are growing into a healthy and sustainable trot. We sustain each other not just by sharing stories but also in our hope that Indian journalism will soon be free of people like you who have run our profession to the ground. We are young and not-so-young people who lean on each other for advice and inputs. We share story ideas. We will not allow our democracy and journalism to be destroyed by rascals and carpetbaggers like you. I pick my words carefully – let that sink in. Do not for a minute think our temporary silence is your victory. If you think so, you are not just stupid, but you are also vain.

We will fight you in the open. Not like cockroaches who flee when there is light on them, but we will fight with our names and be responsible for every word we put out. Every word. Let that sink in too. We are tired of your Hindu-Muslim, Hindu-Muslim and Hindu-Muslim nonsense. We know India deserves better, and it is our job to work with all people who bring new ideas. Cut the crap about being right-wing or left-wing – you are indecent and unhappy people, unkind and so full of venom that you are stumbling on your own saliva. You wake up in the morning, and like piranhas, you troll people in groups because you do not have the courage to stand alone. Who on earth do you think you are?

India belongs to all of us. There is enough space in our vibrant democracy for all views and opinions. Journalism does not mean insulting people you disagree with. Quite the contrary. It is our job to bring out views and opinions because we believe journalism is a public good, and people are our judges. Not you sitting in a television station somewhere or in a newsroom, terrified to give an interview lest people know just how limited you are. You run after politicians, but how many of you are willing to be interviewed by journalists who question you and your methods? The joke is on you.

The pen is mightier than the sword is not seven words randomly strung together.

It means something to us. I did not take the risks I did in journalism to be destroyed by quick-change artists who would do anything for money. Good journalism is up close and personal for me as it is for women and men who put in long hours of work. We do not think we are mighty – we are normal people who dream about bringing the best to our country. We like competition. We believe in good competition where the rules of engagement are defined, taking people and India into confidence. People will guide us. They are our anchors and our compass.

We are unafraid of power and politicians. We are not corrupt. Money cannot buy us. We will fight you tooth and nail. 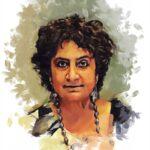