We will never return to cities. Not Covid but poverty will kill us first, say Indian migrant workers - The Probe

We will never return to cities. Not Covid but poverty will kill us first, say Indian migrant workers

The lockdown declared in many parts of India has hit the migrant workers the hardest. With the Delhi and UP governments extending lockdown, many migrant workers told The Probe that they will never return to the cities again.

“Why should I come back again to this place? This is happening for the second time. The government is sending me back again. If the Government is declaring a lockdown, that’s okay but implement it in such a way that people don’t have to get out of their homes. For that, you must fill the ration in people’s homes. You must give money to people. Only then a person will sit inside his house. When a person doesn’t have anything to eat, what else can he do? How can he pay rent for his room?” said Salman, a migrant worker from Saharanpur. 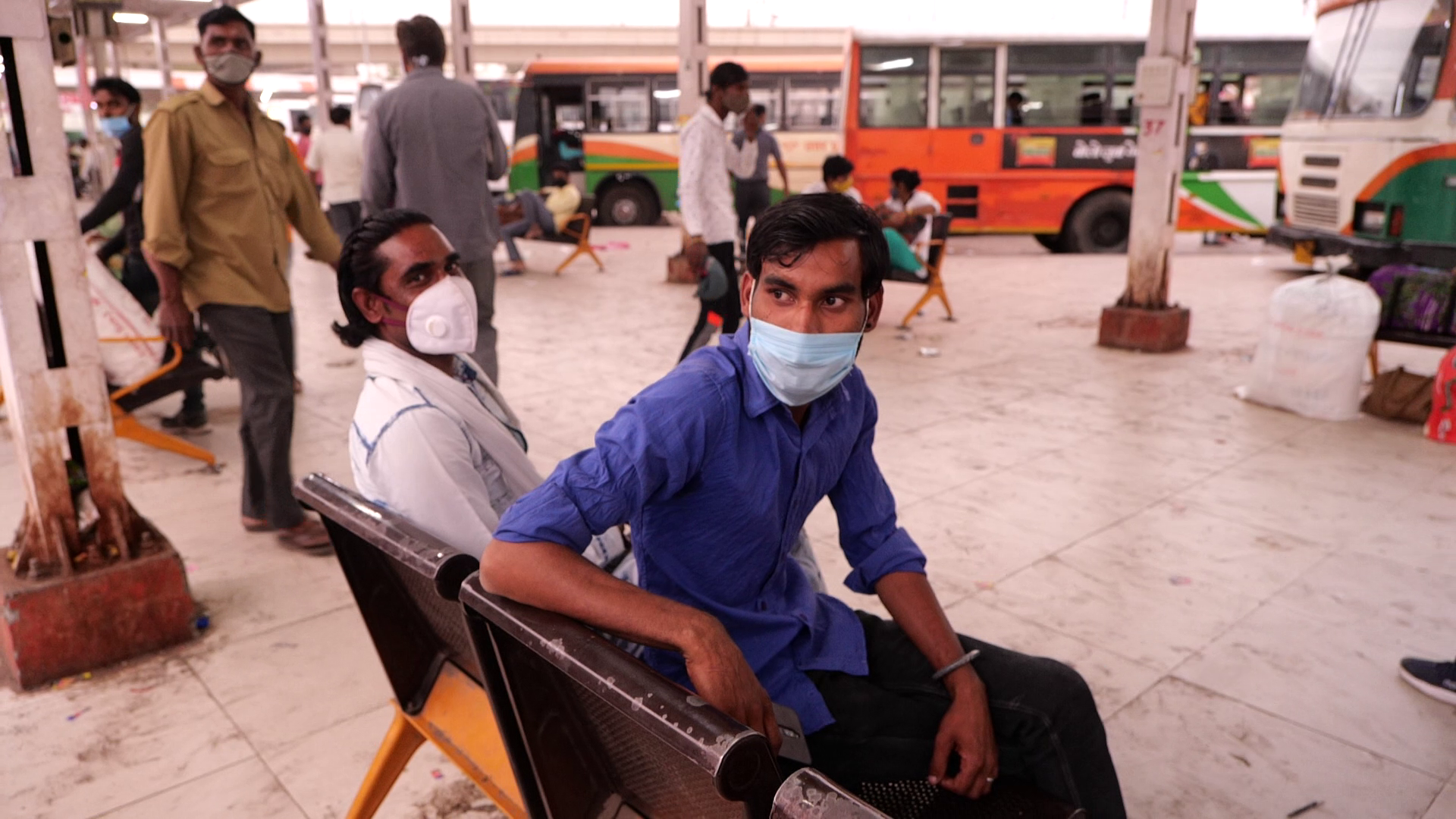 Migrant worker Salman speaks to our team | The Probe

“The people here are saying that this video of mine that you are shooting will go to Modi ji. If my video goes to Modi ji, it’s good. Let it go. When a person is troubled, won’t he speak? Tell me… Am I saying anything wrong? Or am I abusing Modi ji? Or am I abusing his government?” added a worried Salman.

These voices like that of Salman resonate with most migrant labourers in the country who are affected by the lockdown. Another migrant worker, Nirmala from Sitapur in UP said: “I am going away because I am not getting any money to survive. There is a lockdown in Delhi. What will we eat? We are facing a lot of problems, sister.” When we asked her if she would come back to Delhi after the lockdown, she angrily retorted: “Why will we come back sister? See our situation. We are alive but we are as good as dead. For what should we come back?”

We spoke to another migrant labourer who was seen helplessly waiting in the Kaushambi bus station in Ghaziabad in UP who said: “What to do? As it is, our life is filled with suffering. Why should we be scared of Coronavirus? If Corona doesn’t kill us, hunger will surely kill us. Death is a certainty. For the poor man there is only death from all sides.” 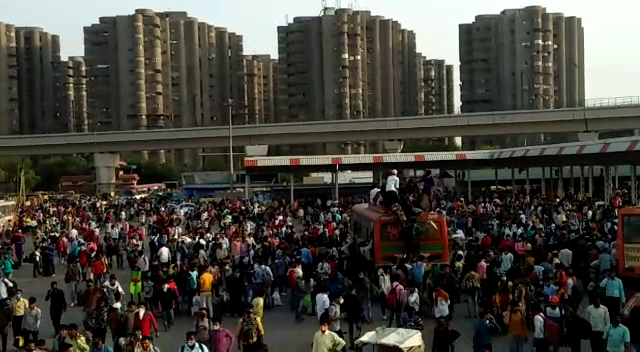 A few weeks ago, when the lockdown was announced in Delhi, there was a mass exodus of migrant labourers from various cities in the country. Panic stricken migrant workers had gathered in huge numbers in bus stands and railway terminals to leave the city that they once called their home. Now, with the Delhi and UP government extending the lockdown, distressed migrant workers are once again trying to get back to their villages but this time they have limited options to travel. The Probe team visited the Anand Vihar bus terminal in Delhi that bore a deserted look. At the Kaushambi bus station in Ghaziabad, migrant workers complained that they were being fleeced.

“I have been waiting for a bus since 12.30. I am not getting a bus to travel. Buses are charging us exorbitant rates,” said a migrant worker. Another migrant worker who was found waiting in the bus terminal for several hours said: “No one is listening to us. They have doubled the rates of tickets. During this time, instead of selling tickets at an affordable price these people are doubling up the rates.”

It’s not just the case in Delhi NCR, ever since some States in India announced the lockdown, many migrant labourers from across the country have been picking up their bags to reach their hometowns. According to the World Economic Forum, India has close to 139 million migrant workers. As per a UN report, due to the pandemic and the lockdown, an estimated 400 million people working in the informal economy in India would be struck by poverty. The unemployment and poverty amongst these workers is so massive that many of the migrant workers we spoke to say they will never return to the cities again.

“Even during the last lockdown we were anxious. Now I don’t want to come back. I won’t return. What is the point of returning? As it is, in our homes, our wife and children are dying of hunger,” said a migrant worker who was waiting to board a bus from the Kaushambi bus terminal. “No one is listening to us. Who will listen to a poor migrant labourer? My house owner is demanding rent. I had borrowed money and ration from people. They are demanding their money back. I am helpless,” said another distressed migrant worker. 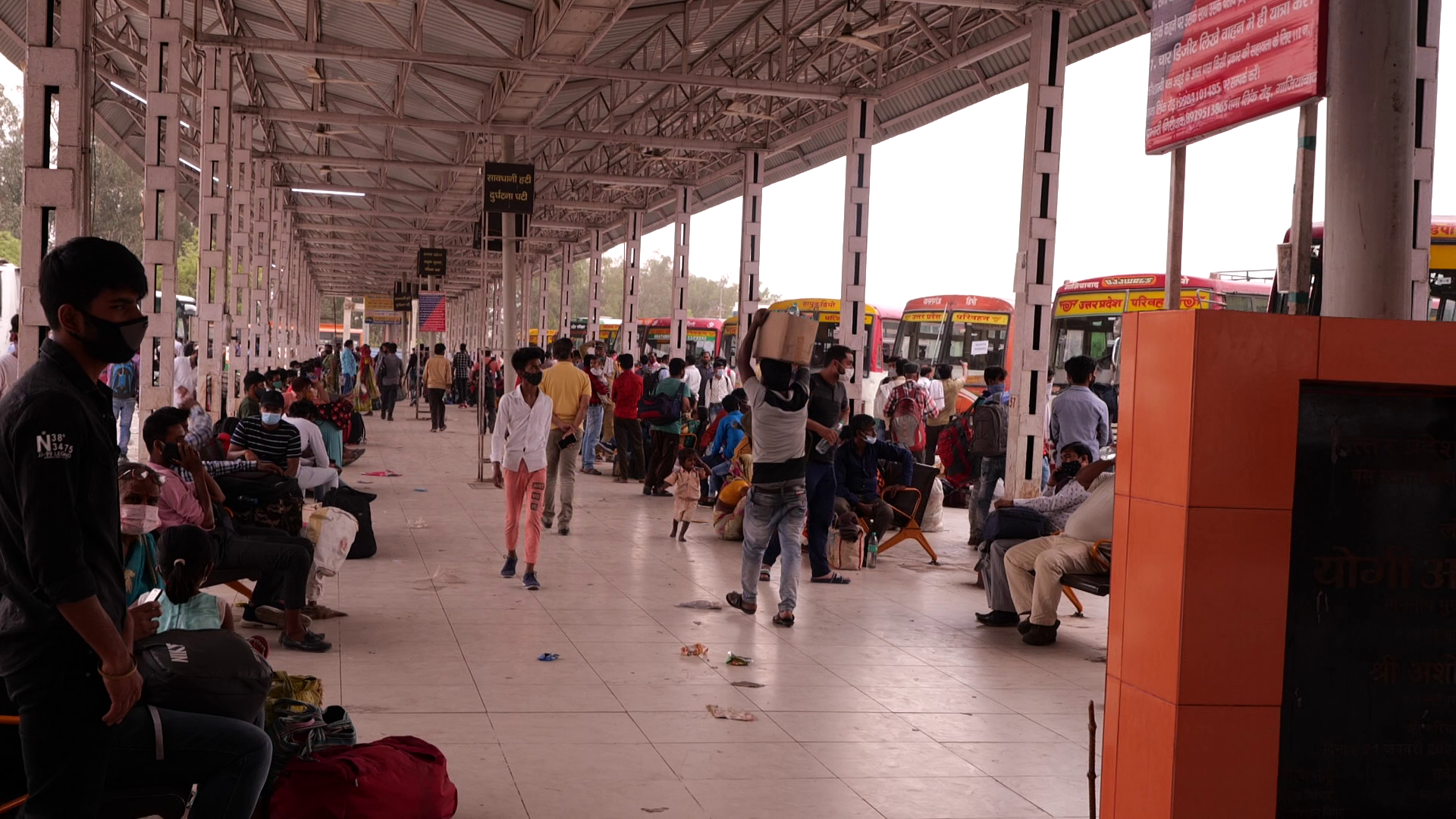 Kaushambi bus terminal in Ghaziabad, UP | The Probe

While vaccination should be the right of every citizen, in India, as of now, mostly privileged people are getting their vaccines. While the government has been asking all of India to get vaccinated, never before has there been such a divide between the rich and the poor in the country. For most poor migrant workers who don’t have a mobile phone leave alone access to the internet, vaccination still seems like a distant dream.

However, not many feel the pinch for not being vaccinated, many say they have larger battles to fight like poverty, unemployment and sometimes the struggle for just gathering a square meal a day. Speaking to The Probe, another migrant worker said, they don’t need vaccines now, what they immediately need is employment: “We want the government to just give us a job. We want employment. We should at least get some work where we can earn some money and take care of the needs of our family members.”

If you like this story and if you appreciate our Ad-Free Independent Journalism platform, show us your support by becoming our Member. Our Journalism can only sustain itself and survive if well-meaning people like you pay for news. Click here to become our Member.
TagsCovid vaccinationCovid-19DelhiInformal economy in IndiaLockdown in IndiaMigrant crisisPovertyPublic healthUnemployment
Related articles More from author More from category
PrevNext