What will bulldozer do to our politics? - The Probe

✕
Copyright © 2022 Fourth Estate Newscorp Pvt Ltd. All rights reserved.
Monday, May 23
Home›Columns›What will bulldozer do to our politics?

What will bulldozer do to our politics?

The use of bulldozers draws its inspiration from how Israel uses it to first scare and then suppress Palestinians by demolishing their homes and consequently erasing their memories of stability, tranquillity and togetherness that was implicit in their past. Violence is heaped on them so regularly that the Palestinians forget the circumstances of Naqba - when 63 years ago, they became refugees in their own country.
by Sanjay Kapoor
ColumnsStories
READ 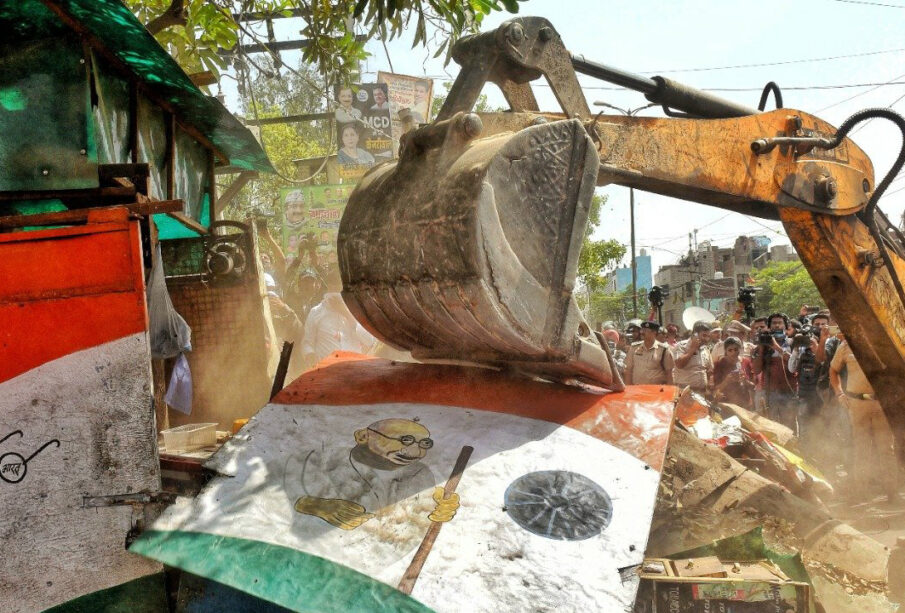 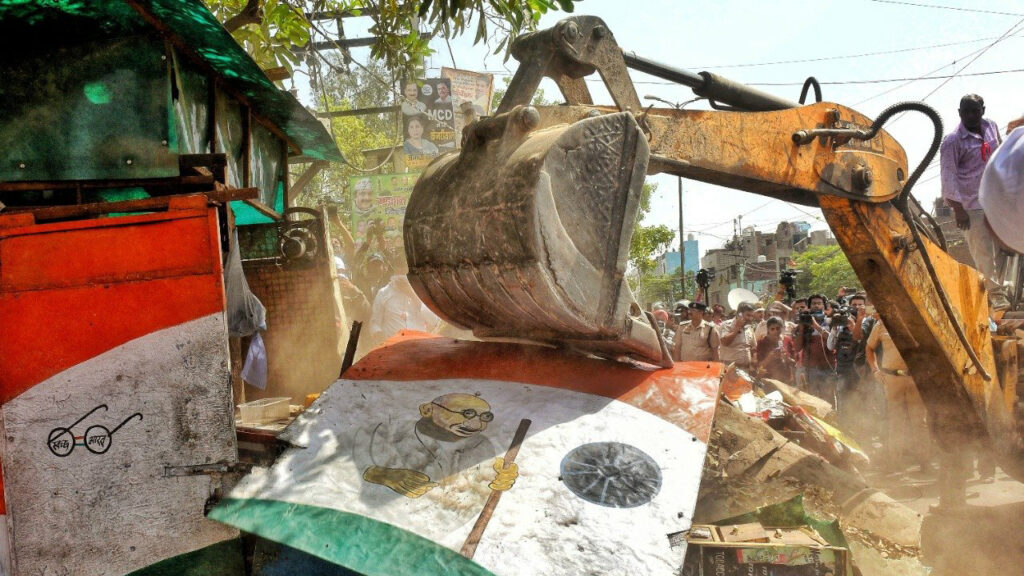 Bulldozers razing shops and houses to the ground in Jahangirpuri in Delhi | Photo courtesy: @ANINDYAtimes | Twitter

On April 10, barely a month after the results of the five assembly elections, including the crucial state of Uttar Pradesh, had been declared, bulldozers moved in at a locality in Khargone in Madhya Pradesh, to brazenly demolish the houses of those belonging to the minority community that had allegedly taken part in the riots that followed a Ramnavami procession.

The use of bulldozers in MP and other states when the identity of perpetrators in violence had not even been settled was unusual, to say the least. Displaying disregard for basic principles of a law based society – which believes that no one is guilty till proven otherwise – these bulldozers were soon seen unleashing destruction in other cities too – demolishing houses and attacking places of religious worship. Even Delhi was not spared.

In Jehangirpuri, a settlement that is preponderantly Muslim, the civic authorities supported by some 400 cops bizarrely chose to punish those who resisted an unauthorised procession of a sword-wielding, raucous group of religious militants. Why are bulldozers so fashionable in democracies even when their conduct is illiberal, exclusionary and symbolises majoritarian dominance?

Visibly, the use of bulldozers draws its inspiration from how Israel uses it to first scare and then suppress Palestinians by demolishing their homes and consequently erasing their memories of stability, tranquillity and togetherness that was implicit in their past. Violence is heaped on them so regularly that the Palestinians forget the circumstances of Naqba – when 63 years ago, they became refugees in their own country.

Bulldozers have been used many times since the Israel armed forces attacked the Palestinian refugee settlement of Jenin in 2002 – a few months after the Godhra riots took place in Gujarat. The manner in which Israeli defence forces quelled the uprising of the Palestinians in Jenin triggered off a global outrage, with reports claiming hundreds of deaths in buildings devastated by bulldozers and army operations.

Figures of deaths were termed as an exaggeration by Israel and its western supporters, but Palestinians saw it as an attempt to whitewash the blood-stained, harsh truth. Israeli authorities – like in Gujarat – have made it amply clear to the Palestinians that when they launch their military action against them in the West Bank or Gaza, then no country, US or any nation from the West that harps on “rules based order” will come to their rescue.

Images that routinely play out in Israel after every standoff between Palestinian and Israeli security forces are now suddenly flooding social media space in India. Ever since UP’s Chief Minister Yogi Adityanath displayed a fetish for the bulldozer, there have been provocative incidents where religious processions comprising rowdy youngsters wielding swords and country made revolvers have entered into areas inhabited by the Muslims and attacked their places of worship. As elucidated above, the processionists have been largely youngmen flaunting swords and shouting abusive slogans as they entered Muslim neighbourhoods. As Mahant Adityanath managed to help the BJP win a second term in Uttar Pradesh, it whetted the appetite of the party to use the same model for similar effects in future elections.

In the recent UP elections, it was apparent that a vast majority of Hindu voters were swayed by the muscular appeal of Modi and Yogi and how they went about putting the minorities in their place rather than allegedly appeasing them – as Congress and other parties were accused of doing.

Like after the 2019 parliamentary elections when the BJP read its re-election as the stirring endorsement of its performance and its manifesto and then speedily went about implementing the two promises that have been aggressively campaigned by its leaders from Atal Behari Vajpayee onwards: abrogation of article 370 and ending the special status of Kashmir and the construction of Ram Temple in Ayodhya.

Besides these two demands, the Modi government wheeled out the Citizen Amendment Act and the National Register of Citizens (NRC), which burnished its credentials as a party serving the interests of the Hindus. CAA forbids the grant of citizenship to persecuted Muslims from the neighbourhood, which means that there is no space for persecuted Afghans or the Ahmedias, Shias or Bohras from Pakistan to get any sympathy from Delhi. This sneaky jettisoning of constitutionally mandated secular values was protested by people of the sub-continent.

Even Afghanistan, usually very pro-Indian in pre-Taliban days, saw demonstrations against the CAA. Protests took place in Bangladesh and even in Indonesia. Do these protests really bother the BJP government? Not if the results of the polls are anything to go by. All the steps that the BJP government at the Centre or state have taken that contribute to the other-ing of the minorities helped in consolidating the fractured Hindu community. Their work was facilitated when the BJP government, as in Lucknow, barefacedly used bulldozers against houses occupied by Muslims, some underworld bosses (mostly Muslims) or those opposed to the government.

Glorification of bulldozers reached a level of absurdity in UP when bulldozers were parked in front of the houses of those who switched from BJP to other political parties just before the polls. At yet another level, the visiting British Prime Minister Boris Johnson, rather indelicately, climbed atop a JCB bulldozer to highlight Indo-British collaboration. Expectedly, he was savaged in the media and the British parliament for giving legitimacy to the state violence epitomised by the use of bulldozers a day after it had been used in a Delhi colony.

Johnson tried to make light of his picture atop a JCB when he said he had asked tough questions from Prime Minister Modi. Later, reports in western media also suggested that there’s disquiet in other Western countries also about the reports of alleged state violence against minorities, but due to the Ukraine crisis and their desire to elicit India’s support for Kyiv, they did not want to push hard.

Was the bulldozer crowd cognizant of West’s limitation to make too much noise on the spurt of riots that rocked 100 towns and cities in 10 states? What do the riots really mean? Will it continue to rage as it does in Israel from time to time, or will this end?